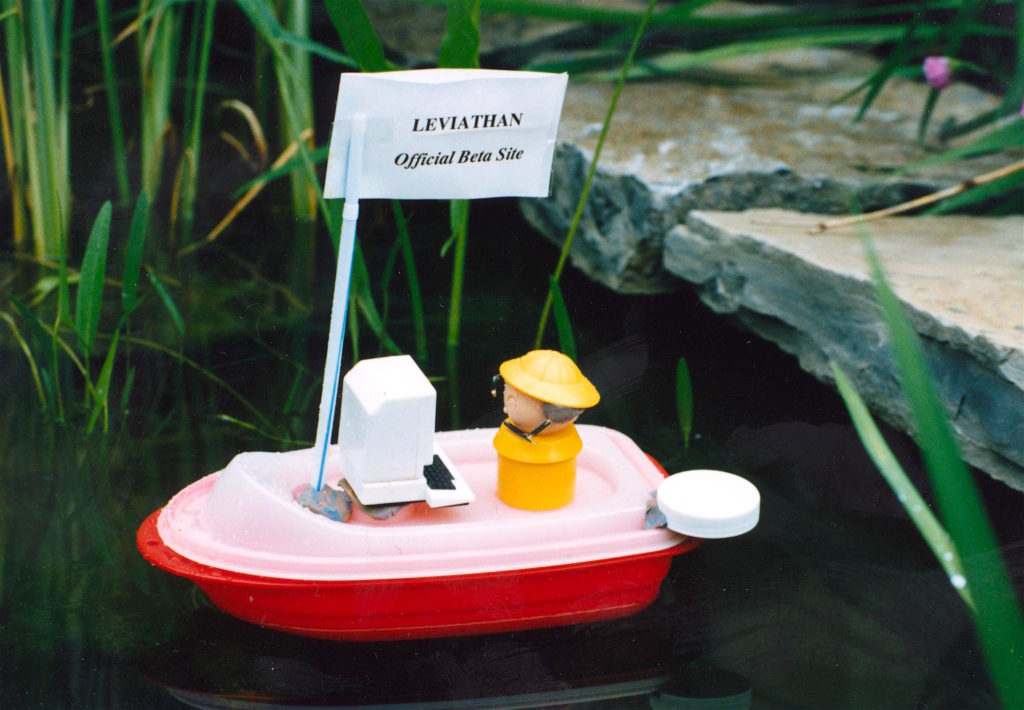 A visit with dear friends in Jamesville, New York, led to a flurry of media coverage including this piece from Syracuse and the one below from Ithaca. I had just begun a media/speaking tour with BEHEMOTH in a mobile lab, and had just finished filming a Phil Donahue episode in New York City. I was seriously considering making the move to water (mentioned briefly at the end of this piece). That was inspired by a kayaking friend, and turned into the 10-year Microship project. The photo above was staged in their duck pond, playing with the LEVIATHAN name that seemed the obvious logical successor to my BEHEMOTH bicycle.

Five years earlier, while I was passing through New York with Maggie, an excellent piece by James Ainsworth also appeared in the Ithaca Journal

JAMESVILLE, N.Y. – Steve Roberts always hated the thought of being anchored down in an office. So he took to the road to find success — literally.

Roberts, who lists author and consultant at the top of his resume, combined his life’s passions into a profitable business: traveling the countryside on a bicycle.

Not just any bike. BEHEMOTH – “Big Electronic Human-Energized Machine, Only Too Heavy” — is an eight-foot, $1.2 million medley of electronics and engineering weighing 580 pounds.

It has 105 gears and is outfitted with a satellite dish, a computer and display screen, a ham radio, a cellular telephone, a CD player, equipment to send and receive live video and solar panels to power the electronics.

“These are all things that nail people to a desk or to a zip code,” said Roberts, 39, a high-tech nomad who has no permanent address.

“I’m showing how you can be productive while being nomadic. If you’re plugged in, you can make a living,” he said.

Roberts has logged 17,000 miles since selling his house in Columbus, Ohio, and pitching away a conventional lifestyle in 1986. He wrote a book, Computing Across America, in 1988 about his first 10,000 miles on the road and is working on a second one.

All based from BEHEMOTH.

“I got into a familiar pattern and finally said enough is enough,” said Roberts, who was staying the week in Jamesville with friends Jean and Larry Polly, two of the network of nearly 5,000 friends he’s met through his computer’s electronic message board and his travels.

“I decided what I needed was to identify my passions and make them into a lifestyle,” he said, listing bicycling, computers, amateur radio, traveling and adventure. “What I came up with is building a hi-tech bike and traveling and writing about it.”

Most of the equipment aboard BEHEMOTH was donated by computer and engineering companies who use Roberts for engineering feedback and publicity. His story’s been chronicled in newspapers across the country, in major magazines and on network television. He was interviewed by Tokyo Broadcasting System during his stay in Jamesville.

“I approach them when their product is a solution to a problem. It’s a way to show them how their technology can be fun, interesting and alive,” Roberts said.

BEHEMOTH, now in its third and final version, can reach speeds of up to 50 mph going downhill. Cruising speed is about 9 mph.

Roberts, who has been towing BEHEMOTH between cities on his current business trip, is planning another major cross country trek beginning this summer in Colorado.

But that may be the end of the road — although not the end of Roberts’ sojourns. “I’m getting tired of the road. Too many dangers, hills and bumps,” said Roberts, whose newest design is for an amphibious kayak.