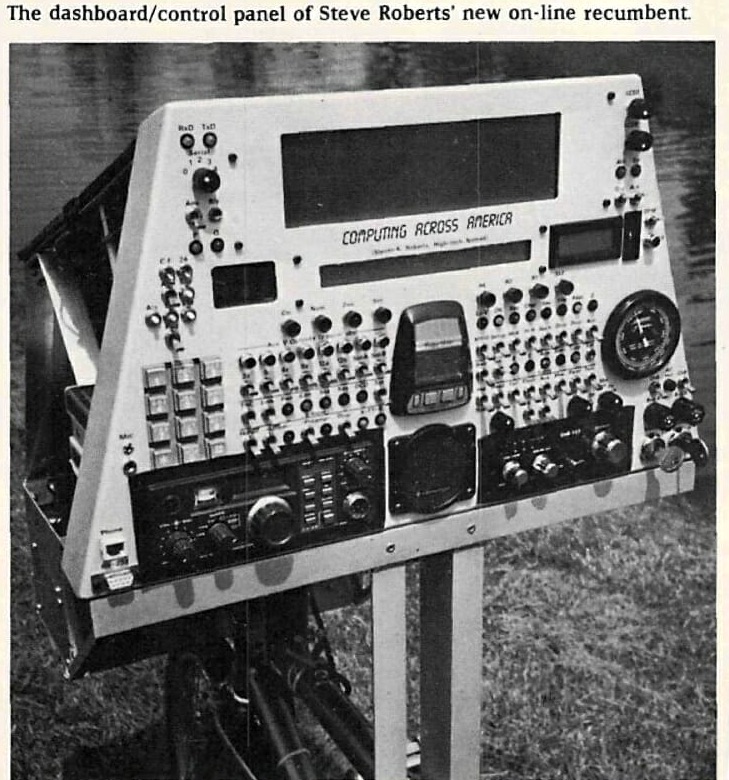 This is a follow-up story to an earlier piece in this magazine that was produced by the League of American Bicyclists (formerly League of American Wheelmen), announcing the resumption of my travels aboard the new version of the bike. Judging from the lack of a fairing, the photo was probably taken on Bainbridge Island in mid-1986… I was working on the machine in a temporary lab, rushing to scoot south before getting caught in a dreary Northwest winter.

When 33-year-old Steve Roberts grew tired of suburbia, he sold his house and moved to a $20,000 bicycle. This “electronic cottage on wheels” is Roberts’ home and full-time office: as he begins the second 10,000 miles of his journey around America, he is earning a healthy living as an author and consultant. His custom-built 8-foot recumbent bicycle carries five computers, two solar panels, satellite communications gear, an aircraft-style control console, and a 36-speed gearing system to help move it all. Roberts writes while he rides using a keyboard built into the under-seat handlebars.

Not surprisingly, this “Wondrous Winnebiko” attracts attention. Roberts has appeared on CBS Morning News, PM Magazine, and dozens of local television shows. BICYCLE USA did a story on Roberts in its July 1984 issue. His articles have appeared in publications ranging from USA Today to Popular Science. His fourth book will be out this fall (Computing Across America), and he occasionally parks the bike and flies to speaking engagements around the country.

But Roberts rarely has to leave the 225-pound bicycle, thanks to his Hewlett-Packard portable computer and the GEnie communications network. “This is the remote-control panel for my office and my link with the universe,” he quips, pointing at the keyboard and gesturing toward a nearby phone booth. In moments, he has established a data link back to Columbus, Ohio, and smiles to himself as the day’s mail scrolls across the sunlit liquid-crystal display.

Says Roberts of his adventure, “I am at once a being of cloud and soil, satellite and bicycle — living two simultaneous lives. One is visceral, sweaty, attuned to every hill and headwind — the other is ethereal, intellectual, an electronic interlocking of imagination and communication.”