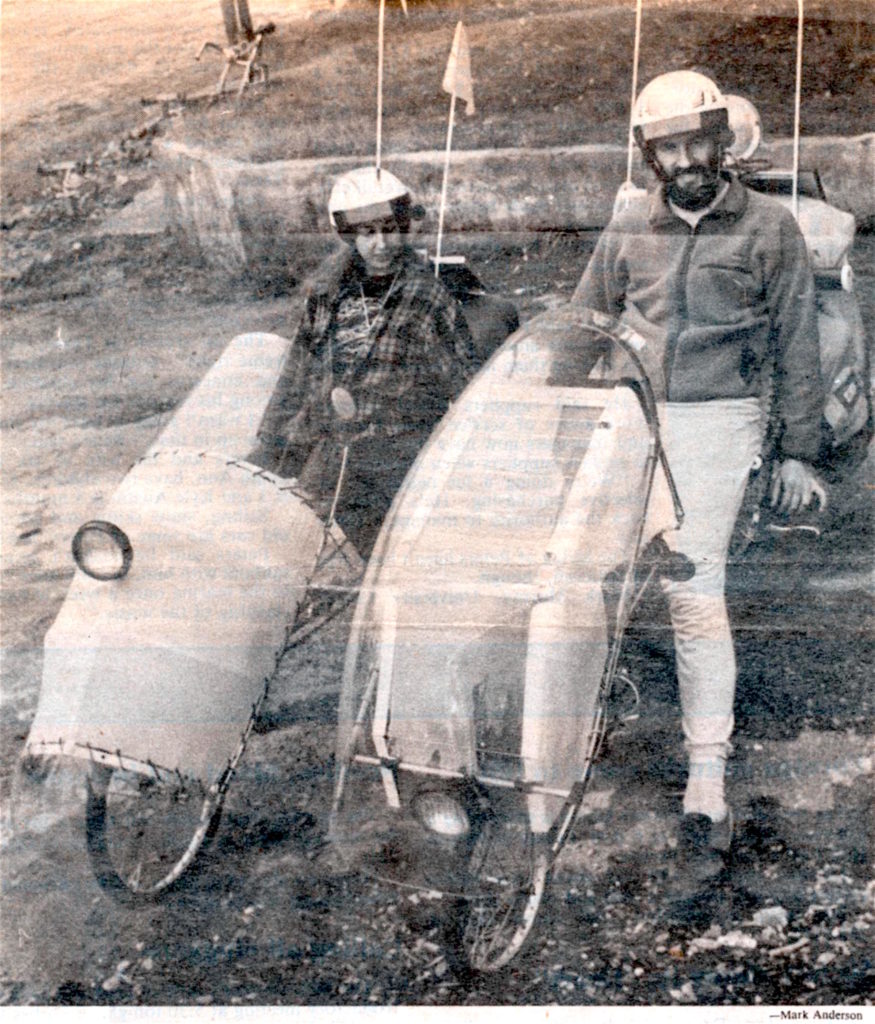 This was a memorable visit during our trek down the coast… the Campus Center for Appropriate Technology at Humboldt State University. As visible users of solar panels, powering computers and communication tools, we fit right in; the campus paper did this story about our adventure. We had paused for about 3 weeks to spend time with friends in Eureka, and commented on this visit during the published narrative.

Self proclaimed “high-tech nomads” Maggie Victor and Steven Roberts on their recumbent bicycles (above) in front of the Buck House Nov. 23. Both bicycles use solar panels to generate electricity for radios, tapedecks and lights. Roberts’ bike also has five onboard computers which allow the free-lance journalist from Columbus, Ohio to write and send stories while on the road. The pair visited the Buck House as they pedaled their way through Arcata on their way south.

With the road as part of his office, Steve Roberts worked his way through Arcata last week.

His office is an 8-foot-long, 36-speed, recumbent bicycle with five on-board computers, and his work is free-lance writing.

Roberts said his 210-pound bicycle, which looks like a computerized bobsled from space, opens doors for him on the road — it worked in Arcata.

Roberts and his traveling partner, Maggie Victor, met one of the resident directors of the Buck House while in Arcata, and they were invited to stay at the Campus Center for Appropriate Technology.

CCAT was an apt place for the self-proclaimed “high-tech nomads” to stay because their machines are self-reliant.

Pedal power propels them along at speeds up to 48 miles per hour. Solar cells generate the electricity for their mini-computers and communications devices.

Roberts said he gets “about 10 miles per pizza.”

To write and send stories, Roberts uses a solar-powered computer and modem.

Not only does the bike have a word processor, it also has a speech-processing unit, a processor for monitoring the solar charging systems, an alarm system that tells people to keep their hands off and an overall control system.

The bicycle’s communications abilities include a citizens band radio, a ham radio and a telephone. What’s more, the bike also has a dual tapedeck so he can listen to music on one deck while he talks into the other. But he doesn’t often use the tapedeck to capture his ideas.

Because a long day of cycling usually leaves him too tired to write, Roberts has a word processor built onto the handlebars of his bicycle.

With four buttons on each grip, Roberts uses binary code to “capture text on the road.”

With eight keys in a binary code, he has 256 combinations with which to type. However, he uses only enough to give him the ability to type the characters of a normal typewriter. “I usually type whenever an idea hits me,” he said.

“I don’t do much typing when I’m riding down a mountain road — I concentrate on just riding the bike.”

While he was in Arcata, he was working on a story for the February issue of Mother Jones. Such assignments are his livelihood.

“If I was independently wealthy, that would be one thing, but I’m not, so I have to work along the way,” he said.

Roberts is a free-lance writer for computer journals, and he has also written for cycling magazines, USA Today and Popular Science.

In addition, he writes a weekly column for the Genie computer network, and he is the author of four books.

His latest book, “Computing Across America,” is the story of his first bicycle trip on the roads of America. From 1983 to 1985, Roberts logged 10,000 miles on his “Winnebiko.”

Roberts met Victor after his first ride, and he asked her if she wanted to go on a bike ride.

“When we first met, he asked me if I wanted to go on a bike ride. This is still our first date,” she said.

This latest odyssey started more than 1,000 miles up the coast at Bainbridge Island, Wash.

The pair has been on the road for about seven weeks.

“We aren’t trying to break any records here,” he said. “We want to enjoy what we arc doing.”

Roberts and Victor, both 34, said the best training for long-distance riding is just to start slow.

The couple’s immediate plans are to ride to San Francisco, where Roberts plans to install some new technical devices on the bike.

He wants to install a larger LCD screen and get software to show a map of the entire United States so he won’t need to carry paper maps.

Paper is something Roberts is trying to avoid. He keeps all his stories on disc or on microfiche. His last book, all 200 pages, is kept on two discs.

Why would a successful computer wizard with a nice house in the suburbs of Columbus, Ohio give up a comfortable lifestyle and set out on the road?

“I was a free-lance writer, but I wasn’t free. I was chained to a desk,” Roberts said.

“I’m in the business of words, and words don’t weigh anything.

“Then I realized that with the available technology I could write anywhere. That was about the same time I found out about recumbent bicycles, and it all sort of clicked together.”

After about six months, he sold his house and car, built the bike and started out on the road.

While he calls himself a journalist, he is a bit of a philosopher.

“Most people work all their lives and hope to get it all back when they retire. I want it now,” he said.

He said he and Victor have no definite plans after San Francisco, but they plan to cross the country.

They are, however, in no hurry.

“You can’t think too much about where you are going,” Roberts said. “If you do, you won’t enjoy where you are.”