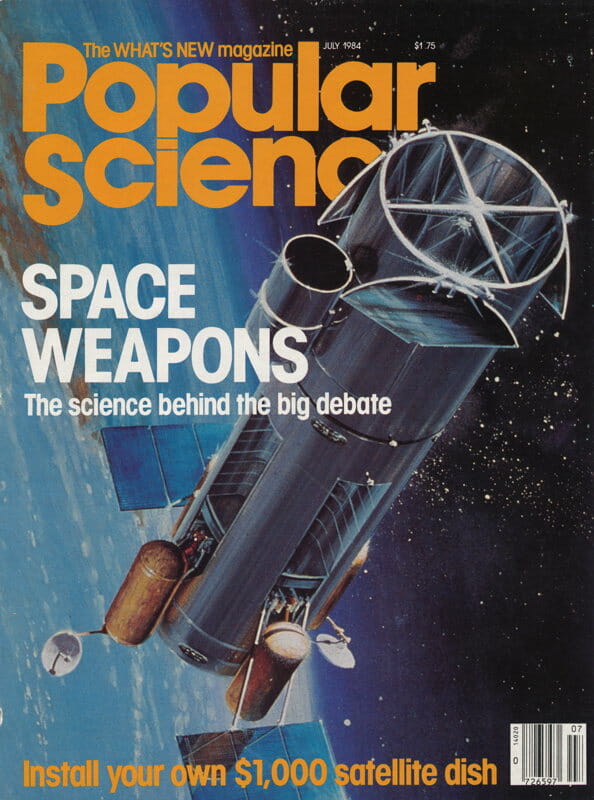 I have fond memories of this article, which was written very early in the adventure… about 3000 miles along, relaxing on a Key West beach in early January, 1984. The system was simple and elegant back then… and I was concerned only with article deadlines, cash flow, and how to make it back to the mainland without retracing my path up Highway 1.

As a free-lance writer, theoretically I can work anywhere. But unfortunately, the reality didn’t quite measure up. My work has required three cluttered desks, a word processor, a copier, two large filing cabinets, hundreds of books, and thousands of magazines. I remained chained to my desk in a three-bedroom ranch in suburban Columbus, Ohio, with little more real freedom than the average corporate employee. 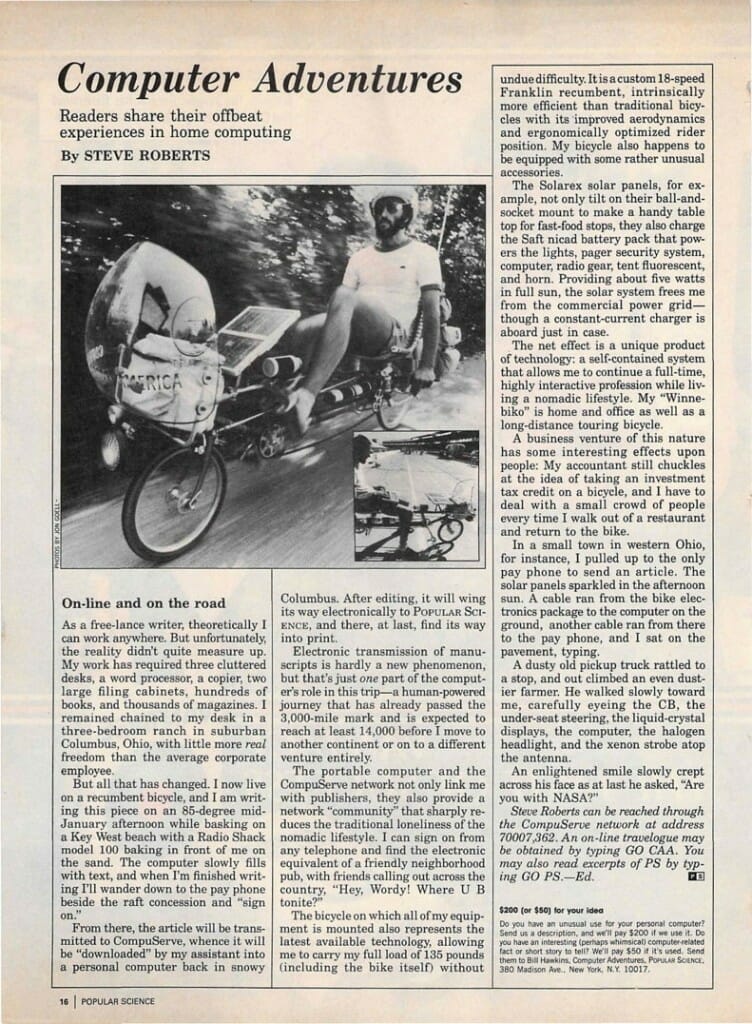 But all that has changed. I now live on a recumbent bicycle, and I am writing this piece on an 85-degree mid-January afternoon while basking on a Key West beach with a Radio Shack model 100 baking in front of me on the sand. The computer slowly fills with text, and when I’m finished writing I’ll wander down to the pay phone beside the raft concession and “sign on.”

From there, the article will be transmitted to CompuServe, whence it will be “downloaded” by my assistant into a personal computer back in snowy Columbus. After editing, it will wing its way electronically to Popular Science, and there, at last, find its way into print.

Electronic transmission of manuscripts is hardly a new phenomenon, but that’s just one part of the computer’s role in this trip—a human-powered journey that has already passed the 3,000-mile mark and is expected to reach at least 14,000 before I move to another continent or on to a different venture entirely.

The portable computer and the CompuServe network not only link me with publishers, they also provide a network “community” that sharply reduces the traditional loneliness of the nomadic lifestyle. I can sign on from any telephone and find the electronic equivalent of a friendly neighborhood pub, with friends calling out across the country, “Hey, Wordy! Where U B tonite?”

The bicycle on which all of my equipment is mounted also represents the latest available technology, allowing me to carry my full load of 135 pounds (including the bike itself) without undue difficulty. It is a custom 18-speed Franklin recumbent, intrinsically more efficient than traditional bicycles with its improved aerodynamics and ergonomically optimized rider position. My bicycle also happens to be equipped with some rather unusual accessories.

The Solarex solar panels, for example, not only tilt on their ball-and-socket mount to make a handy table top for fast-food stops, they also charge the Saft NiCad battery pack that powers the lights, pager security system, computer, radio gear, tent fluorescent, and horn. Providing about five watts in full sun, the solar system frees me from the commercial power grid — though a constant-current charger is aboard just in case.

The net effect is a unique product of technology: a self-contained system that allows me to continue a full-time, highly interactive profession while living a nomadic lifestyle. My “Winnebiko” is home and office as well as a long-distance touring bicycle.

A business venture of this nature has some interesting effects upon people: My accountant still chuckles at the idea of taking an investment tax credit on a bicycle, and I have to deal with a small crowd of people every time I walk out of a restaurant and return to the bike.

In a small town in western Ohio, for instance, I pulled up to the only pay phone to send an article. The solar panels sparkled in the afternoon sun. A cable ran from the bike electronics package to the computer on the ground, another cable ran from there to the pay phone, and I sat on the pavement, typing.

A dusty old pickup truck rattled to a stop, and out climbed an even dustier farmer. He walked slowly toward me, carefully eyeing the CB, the under-seat steering, the liquid-crystal displays, the computer, the halogen headlight, and the xenon strobe atop the antenna.

An enlightened smile slowly crept across his face as at last he asked, “Are you with NASA?”

Steve Roberts can be reached through the CompuServe network at address 70007,362. An on-line travelogue may be obtained by typing GO CAA. You may also read excerpts of PS by typing GO PS. —Ed.

Posted in Media - Winnebiko and tagged Popular Science, Winnebiko
← A Model 100 Odyssey on a Recumbent – Portable 100Roamin’ Free, but Plugged Into the Job – USA Today →