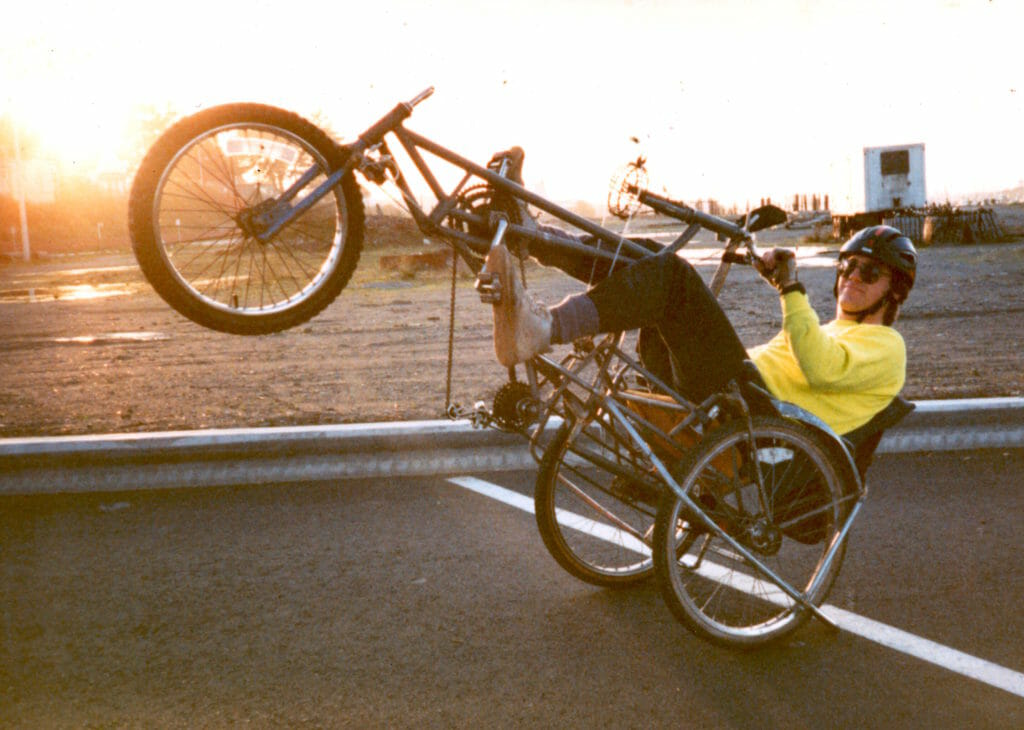 I have often called this journey a lifestyle sampler. If that’s true, then when does the wild experimentation of the gourmet become the wretched excess of the glutton? Can there be too much? With a mighty intellectual belch I lean back in this old dog-scented recliner, fight off the torpor with a sip of Jolt Cola (“All the sugar and twice the caffeine”), and think it over.

There is a lot of energy in this adventure. For ten thousand miles I wandered alone, driven by obsession, the darkness of my solitude illuminated at odd intervals by flashes of romance. There were moments of magnificence, moments of discovery, moments of pure terror… but it wasn’t enough. I wanted all that and home too. Exhausted, I began to yearn for my own bed; I wanted to know a place well enough to find the bathroom in the dark and recognize the nighttime creaks. The journey sputtered to a halt near San Francisco — and I somehow ended up back in Ohio.

But the corporate life, the Midwestern dullness, the restlessness of my own spirit—they were all there, forming an even stronger conspiracy than before. I had gotten a taste of the road, and could never forget it. I dreamed of it; I ached for it; I rebuilt the bike in a frenzy and set out once again with vastly improved systems.

There are differences this time, even ignoring all the extra technology. I have a companion to provide stability and security, a friend who eliminates the old urgency that once had me ignoring grand opportunities when there was even a hint of female nearby. Maggie has dramatically changed the character of the trip, making it warmer and somehow more domestic. But there’s another difference that has little to do with her: I have been here before.

No, not in Humboldt County, which I’ll tell you more about in a moment. Here — on the road. The sense of adventure that accompanied my first million pedal strokes so long ago is now muted; I spend more time worrying about unfinished projects than thinking hot damn I can’t believe I’m really in California WOW I wonder what happens next??? The trappings of adventure are all there, but the essence is something that only surfaces when I get off the bike and do something I’ve never done before.

That’s why the miles pass so slowly. I’ve done 33 of ‘em since the last chapter, and they were northbound — a backtrack to Trinidad. This is not the old spirit of Computing Across America, it’s something else… something I better identify soon. It’s subtle: I didn’t get a hint of it until I kept noticing that the exuberant overview article I’ve been grappling with all week wasn’t quite ringing true.

William Least Heat Moon observed in Blue Highways that “the wanderer’s danger is to find comfort.” This is true, though I’ve always interpreted that in a local sense — the difficulty of leaving is always proportional to the time I’ve stayed in one place. But perhaps comfort can be interpreted on other levels…

This is starting to sound like I’m complaining about comfort. Hardly. But there’s a change happening in this journey, and failing to acknowledge it would be more damaging to the adventure than all the logging trucks in the Great Northwest rolled onto a single mountain road with me in the middle.

Of course, this never was the Race Across America. Those guys go further in a day than I do in a week. I’ve never been in much of a hurry, for pedaling to a schedule reduces the road to a mere obstacle lying in the way. I have seen skin-suited cyclists, loaded for touring but dressed for racing, blasting down mountain roads while hunched over drop handlebars… too obsessed with speed and mileage to be conscious of the beauty unfolding like new love around them. That kind of travel has the flavor of a corporate acquisition: aggressive, carefully mapped, no move possible without committee analysis of the bottom line.

But slow touring is one thing, meandering from home to home is quite another. I suspect that’s the change in the air — a realization that movement is not necessarily the essence of travel. Some adventures seem to happen with no sweat at all.

I spoke last week of Humboldt County, a place that fits right into this discussion. We’ve been here for a couple of weeks now, involved enough with a new circle of friends to find ourselves with multiple social options every night and difficult decisions concerning leaving. There could be worse problems. (I remember grim epochs when I felt I had no friends, no place to go. You’ll never catch me complaining about having more than I can keep track of.)

There’s an interesting group here. They consider constructive play to be inextricably entwined with constructive work — to the point that I am unable to discern the boundaries. Their participation in the annual Arcata to Ferndale Kinetic Sculpture Race is serious enough to classify as a career (requiring no small measure of dedication, since machines must be designed and built as well as pedaled over 38 miles of land, sea, sand and mud). And our zany friends Duane, Ken, and Stock are the architects of a promising new sport called Trollo.

These are hard-core bikies, but not in the racing tradition. They’re more likely to spend a cycling get-together hunched over an oxy-acetylene torch than strutting about in skinsuits comparing derailleurs — their machines look battered and functional, not sleek and aerodynamic.

The obsession began with kinetic sculpture, which seems as much a part of Humboldt County as the residual 60’s population and a thriving specialized agriculture to match. This isn’t just a race, it’s the annual climax of a lifestyle. Everyone involved works year-round on machines to take on Slimy Slope, Dead-man’s Drop, and an assortment of other obstacles including 12 miles of sand, 3 miles of water, emotionally involved spectators, and an almost exhausting sense of profound silliness. Consider the machine names: The Bionic Taco. Fourplay. Artburn. The Green Marine Bovine Machine. And the infamous Quagmire Queen, the 4,000-pound creation of Hobart Brown himself. These are not the products of coldly rational minds bent on victory.

Such dedication has spinoffs. It’s impossible to put hundreds of hours into such work and not be profoundly affected. Our friends found themselves building vehicles year round: unibikes, three-wheelers, strange unridable experiments. But the ones that quite invaded their lives are the recumbent Trollo trikes.

Wednesday afternoon. The artists are transformed, not the people I knew moments before. As they growl aboard their ragged machines, I soon forget their paintings, their sculptures, their murals, the polished works of their Old Town studios. This is the sport of human-powered road warriors — a sort of wheeled rugby for three. In the parking lot under Eureka’s Samoa Bridge they go at it: nearly half a ton of roiling manflesh and steel in hot pursuit of a crushed, taped Budweiser can — urging it this way and that with flailing implements of rubber and wood. Bikes tip, spokes bend, derailleurs break, blood flows. Still the game continues, into the dark, the players obsessed, crazed men of steel. There’s no surrogate Monday night football for this crowd… adrenaline is part of their staple diet.

The game has a future, I think — I helped them write up some rules the other night and they’re discussing marketing. But the beauty of this is not the business but the play, the play, the thing I keep harping on. Play. Why is it so rare?

There seems to be a belief that true, absorbed play is the exclusive province of children. But here and there are adults who’ll never “grow up,” adults who recognize the essential nature of fun and build a daily dose of it into their lives. They’re always different from their peers, whether a retired airplane builder, a mill foreman who makes radio-controlled helicopters, a loony writer who lives on a bicycle, or people who took a 50% pay cut and moved to Crested Butte just for the mountain bike trails. This all brings back a theme from my first trip — the definition of “success” as the inverse ratio of all you put out (sweat, pain, work, and stress) to all you get back (pleasure, fun, sex, humor, happiness, insight, friendship, health, and — oh yes — money).

The happiest people are those who know this, and include in their “life portfolio” some heavy investment in pure unadulterated play.

Well. This chapter certainly ran the gamut, didn’t it? From anguished introspection about the future of my travels to a rhapsodic essay on the playfulness of new friends… that’s the difference a sunset walk on the beach can make. Underfoot sand frozen in textbook illustrations of wave motion, surf thundering white plumes against black cliffs, everything touched with sunset gold, Maggie’s hand in mine… how could I return to the keyboard and continue on a theme of depression?

It happens. It goes away. The beat goes on, and I’m smiling again.