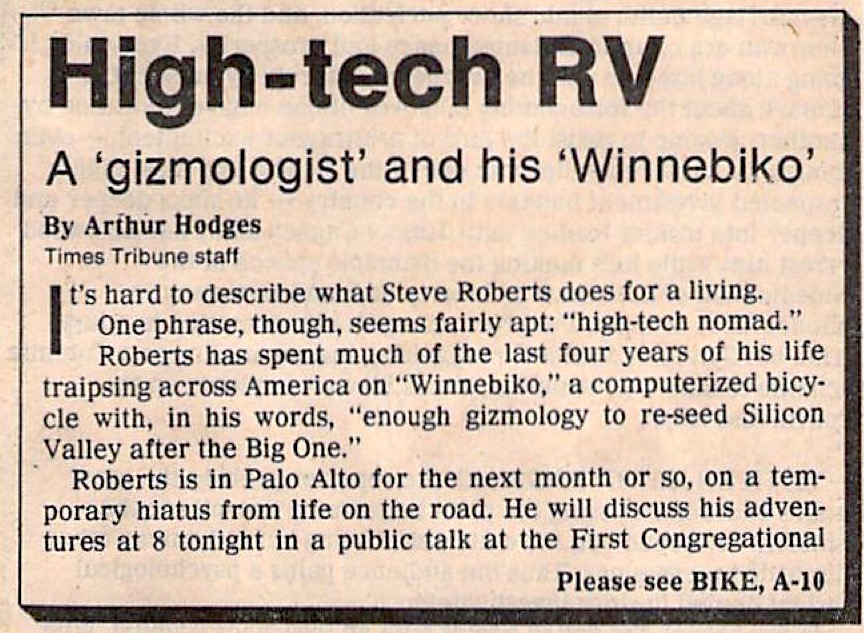 After the trek down the Pacific Coast, we had a layover to continue work on bike systems, make progress on publishing projects, and figure out what next… and we stayed with a geek friend in Palo Alto who let us set up a lab in his ping-pong room.

It’s hard to describe what Steve Roberts does for a living.

Roberts has spent much of the last four years of his life traipsing across America on “Winnebiko,” a computerized bicycle with, in his words, “enough gizmology to re-seed Silicon Valley after the Big One.”

Roberts is in Palo Alto for the next month or so, on a temporary hiatus from life on the road. He will discuss his adventures at 8 tonight in a public talk at the First Congregational Church in Palo Alto.

“I’m the living embodiment of risk,” Roberts said. “I trashed a lifestyle in Ohio, jumped on a bicycle and went flirting with logging trucks.”

The bicycle he jumped on is no ordinary 10-speed. It’s an eight-foot, 220-pound, 36-speed recumbent bicycle outfitted with five computers, a ham radio and citizens-band radio, all powered by photo-voltaic solar panels. About all it has in common with a normal bike is pedals.

All the equipment serves a purpose. Roberts uses his high-tech gear to communicate with the computer networks and databases he literally calls home.

“Living on the bicycle like this, I have become something of a caricature of the information age,” Roberts said. “The GEnie network is the closest thing to home I’ve got.”

“GEnie” is just one of many computer networks Roberts can tap into at any phone booth in the country. Through them he can check in on his business headquarters in Ohio, pick up electronic mail, or just “chat” with anyone else who happens to be “on-line.”

Computerized communication is more than just a way of life for Roberts. It embodies an entire philosophy and world view.

Roberts said he believes the realm of network communications, which he calls “dataspace,” is tranforming the world into a true global village, rendering borders and bigotry obsolete.

Roberts, 34, began the Winnebiko adventure in 1983. When lack of change began to stifle his work as a free-lance writer and consultant in Columbus, Ohio, he decided he needed to get out.

“I was spending more than I was making in order to support a life style that I hated — a three-bedroom ranch in suburbia, a BMW, all that stuff,” he said.

So Roberts sold his house, built his Winnebiko and took his writing job to the road.

His journey — undertaken in two legs over the last four years — has carried him across almost 12,000 miles and through more than 20 states. He has traveled as far east as North Carolina, as far south as Florida, as far north as Washington and as far west as San Francisco Bay.

Winnebiko is ingeniously designed so Roberts can bike and type simultaneously.

On the first leg of his journey, Roberts had only a laptop portable computer to write with. Inspired ideas that came to him on the road often were lost beyond recollection at day’s end.

So, when he remodeled his bike last year, he installed four keys on the underside of either handlebar. Using a special binary typing code, he can tap out around 30 words a minute, capturing profound road-thoughts while they’re still in his head.

Roberts is unsure exactly when his Palo Alto stopover will end, or where he’s headed next.

“If you get too obsessed with where you’re going, you lose your perspective on where you are,” he said.

When he does move out, he probably won’t have much trouble finding someone to put him up for the night. His computer’s memory is full of contacts he’s made through the networks.

Even in places where he knows no one, Roberts can rely on strangers’ hospitality.

“The bike opens doors,” he said. And there’s always his tent.

Roberts seems to harbor no regret about abandoning the stable comfort of suburban life in the Midwest.

“The greatest risk of all is taking no risk,” he said. “If you wait until you retire you’ll be very disillusioned. I’ve met a lot of very bitter old people who waited for the big payoff, and it never came.”