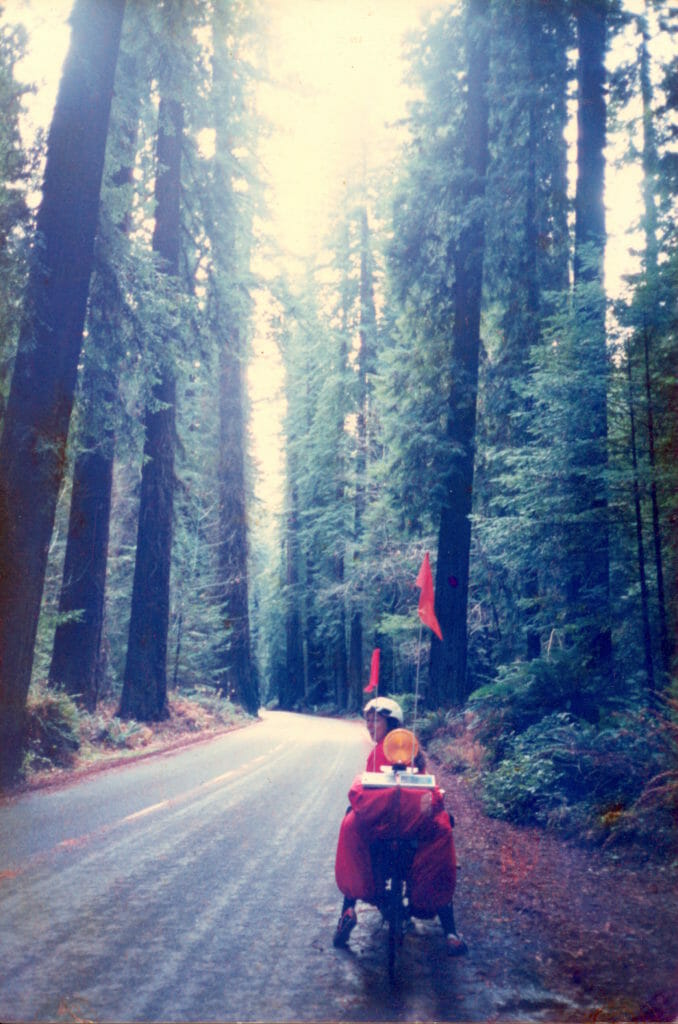 Eyes wide, steadying myself against a massive redwood high in the Santa Cruz mountains, I stare at the distant campfire. Sparks soar into the trees through a column of suffused smoky light; black shadows stab the sphere of fireglow with every human movement. I hang back, watching, my woman silent and alert beside me.

The rhythm is intoxicating: three drums, maybe four: deep bass and articulate congas. The vibrations settle in my chest, touch the forest with a feeling primeval, send technology skittering into its neat burrows. The bass, thundering deep, sets the pace — steady, potent, unstoppable — while through it dances higher percussion, counterpoint, call-and-response… the cycle to cycle variations at once subtle and profound. Flying fingers backlit by fire, faces intent and sweaty, backs bent over taut skins. Somewhere in a second of silence barks a dog, in seeming harmony with the resonance of the land, as eerie as the sound, the sound. The whole mountain, all of it, is alive and pulsing with the beat of this moment, this moment, timeless, endless, relentless.

It doesn’t stop; it evolves — now a new passion… now an old lament. We gaze enchanted through ancient trees, and I finger my flute, fingers itching deeply, lips tightening in unconscious embouchure, the cry straining at my throat. A branch cracks under my step, and yes, yes, I see I’ve begun walking, walking toward the fire, drawn irresistibly into this evocative oasis while probing the rhythm, finding the niches, sensing the power, breathing deep, seeking a point from which to leap…

And in a violent, primitive pas de deux I explode from the undergrowth and flash through the clearing in a blaze of silver. I find the changing interstices of the syncopated heartbeats and dart between them, taking insane chances, flirting with one only to leap aside at the last moment and embrace another. Crazy, crazy, I circle the fire, stopping here and there, my passionate brainsound spiraling skyward amidst the rhythmic pounding, sound and spark, spark and sound, matter into energy into the dazzling radiant magnificence of pure music unleashed…

Thanks. I needed that.

Later, at the bottom of a 10,000-gallon column of air, I stand in semi-dark with Maggie, toying with cistern sounds, probing the acoustical space with broad-spectrum mouth clicks. Then the flute, of course… as well as some playful a capella scatting locked spectrally to the resonant peaks of this giant chamber. Suddenly an unexpected voice fills the night: a deep soulful bass from Maggie. I stand in quiet awe, eyes locked with hers, as “Swing Low, Sweet Chariot” emanates smoothly from this soft creature whose behavioral space I thought I had fully mapped.

Those are nice surprises. Also nice is soaring over a valley on a 78-foot swing, cane-clambering through a redwood forest, becoming a human tether ball on the Columbian columpio de vuelo, and generally taking a day off. I needed it, this retreat to our host’s 8-acre playground in the mountains. I needed it very badly. It’s easy to forget amidst all the deadlines that this is, at its heart, a life of travel and adventure.

There have been other treats as well, for the layover in Silicon Mecca is beginning to yield true enlightenment (except, perhaps, where gravity is concerned: I keep adding new toys to the bike). Freshest in my mind is yesterday’s visit to NASA’s Ames Research Center.

Standing before a Cray-2 is a sort of religious experience. 268.4 megawords of 64-bit-wide, 80 nanosecond main memory. A 4.1 nanosecond clock. 15 miles of wire. 195 kilowatts dissipated by a waist-high, 2-ton cylindrical computation engine 53” across. Towers of circulating fluorocarbon cooling fluid. This Cray (named Navier) doesn’t mess around with terminal I/O — it talks through optical fibers with a roomful of subservient Amdahls and VAX’s (named Amelia, Fred, Orville, Wilbur, Meyer, and Prandtl) which handle the minor chores like communications and file management. It also has wide-bandwidth links directly via satellite (not dial-up nodes) to research computers around the world. This thing is a number cruncher, big time, dedicated to airflow modeling, finite element analysis, computational chemistry, and other things that we personal computer users seldom get to take very seriously.

I stood there in conversation with one of the resident system wizards, trying to intellectually grasp the notion of a 28-million determinant array — or the system’s raw computing speed of 1.72 billion floating-point operations per second.

“It’s the most fun place I’ve ever worked,” he said lightly, eyes twinkling.

In the time it takes this box to do a 64-bit ADD, light travels less than the length of my tent. “A system user’s level of expectation is always about 20% greater than the available capacity,” I said, quoting somebody. “Is that true here?”

“Oh yes. It only took about two weeks before ‘oh wow’ turned into ‘come on, come on…’”

We saw other fast and interesting devices at Ames… watched the Harrier Jump-jet leap off the runway, pause in the air, rotate slowly, fly backward for a few hundred feet, then streak off at 650 knots. We wandered through an 80×120-foot wind tunnel driven by a 136,000-horsepower air mover, saw a hypersonic test chamber, and poked through the instrumentation bay of an infrared airborne observatory. These people definitely know how to party with technology.

Of course, that goes for a lot of people around here. A friend retrofits pianos with key-velocity sensors and MIDI outputs. Another designs machine tool interfaces based on subtle finger movements and amplified feedback. Yet another dabbles in spread-spectrum data communications, and everybody I meet seems to not only be computer literate but also to have some little AI consulting enterprise or cottage industry going on the side. And I’ve finally hooked up with Stanford.

A couple of chapters ago, I noted the strange flavor of the Stanford campus. Now I’m beginning to see it as an insider: I’ve crawled into bed with the Mechanical Engineering department. In exchange for doing a few design seminars around my bike, I have full access to the CAD systems, numerically controlled Matsura mill, various machine shop tools, and so on… so of course I immediately scanned my project list for a good place to start. I now pedal over to campus at about 11 at night, when the mad end-of-quarter rush is beginning to thin. By 3 AM Saturday morning, the dual header for my hydraulic brake master cylinders was fully defined as a Pascal program on an HP CAD system, with the tooling path looking quite lovely on the graphic display. We plot the parts in aluminum this week.

Play, play. Someone should make a mantra out of that. At about 3:30 Sunday morning on a borrowed Mac Plus with 20 meg Data Frame, staring bleary-eyed into PageMaker, I tried to remember that this was not just a flyer layout, it was a learning curve. (Those, in general, are self-justifying.) I signed on to GEnie, needing a break, and found a piece of email from a reader in Michigan….

“I envy you from here in the frosty Midwest, where we plummet from 72 degrees to 27 in a day. Hmmph! I crank out the odd short story here at the University of Michigan, but certainly nothing like the reality you’re getting. Must be nice!”

Ah, thanks for the reminder, Chris. It is nice. I signed off, smiled, glanced over at horizontal Maggie breathing slack-jawed in the fringes of my desklight, and breezed through a few Mac music and graphics programs before returning to the ever-finer details of laying out my ambitious first attempt at desktop publishing. Somehow, it made a difference.

So. There seems to be a lot of travel inherent in this layover, doesn’t there? Physical movement may be at a minimum, but that of the intellectual variety is running rampant. The clutter of my room is dynamic; the social calendar is crammed with company visits, speaking engagements, and evenings with new friends. Good signs.

For if you consider the essence of travel to be the energy that precedes the knee of a learning curve, then we be cruisin’!

Posted in Miles with Maggie
← High-tech RVHealing Our World presentation →