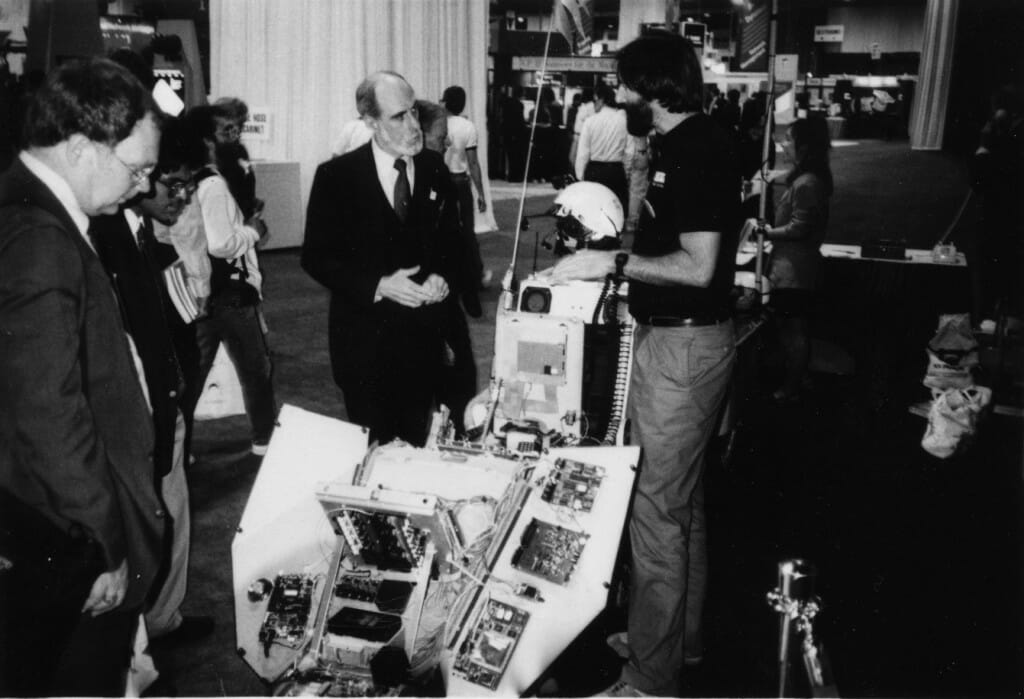 The photo at the top of this page shows Vint Cerf, an iconic figure in Internet history, stopping by my booth to see BEHEMOTH. It was an honor to spend a few minutes chatting with him. The photo is by Ole Jacobsen, taken at Spring Interop in Washington DC.

This was my booth on the Interop Spring show floor, May 18-22, 1992. The 4-day event was a whirlwind of amazing people, and I also gave a keynote presentation.

Later that year, BEHEMOTH also appeared at Interop Fall at Moscone Center… and we had a panel discussion with the übergeeks who built the networking systems. The complete audio recording is on this page.

From an article about the show by Daniel P. Dern in ConneXions, July 1992:

“This is one of the best managed trade shows I’ve been to, and I’ve been to a lot lately,” stated Steve Roberts, the High-Tech Nomad, who rode BEHEMOTH (Big Electronic Human-Energized Machine — Only Too Heavy), his highly computerized and networked recumbent bicycle into town for the event. “I’ve been impressed how smoothly everything is running, and how nice people are. And everyone here is very literate — even the ‘level one’ questions come from a perspective of technical excellence.”

“I’m learning a lot about networking,” said Steve Roberts, who sandwiched in interviews with the BBC and NPR’s Noah Adams. “I’ve gotten a lot of good ideas from the people here.” Perhaps next INTEROP we’ll see a Bicycle MIB?