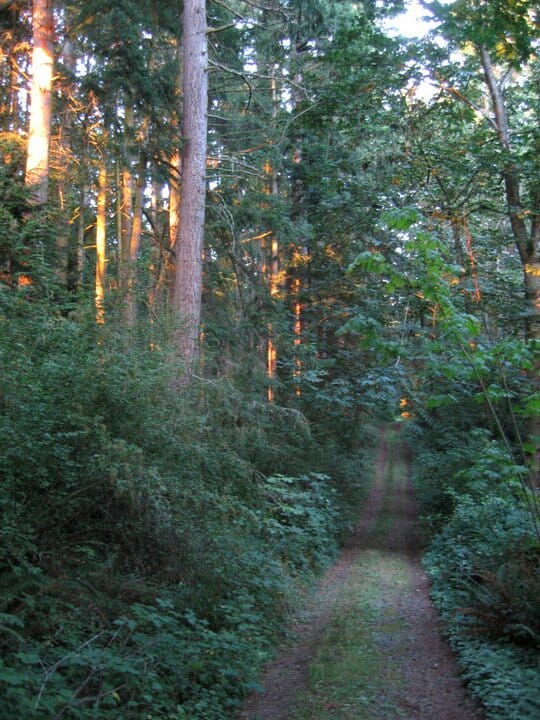 This is a bit of a departure from the main content thread on this site, but is included in the interest of completeness. When I bought a house and built a lab in the woods of Camano Island, I unintentionally took on a very protective attitude toward that beautiful and fragile place… a slender slice of paradise in Puget Sound, one of 68 sole-source aquifers in the US, and a frequent battleground between commercial loggers and those who value their quality of life. Published a week before 9/11, this letter to the local paper captures my antibody-like reaction to one of the more active local resource-extraction enterprises.

In his letter to the Stanwood/Camano NEWS last week, Daryl Jones raised a valid question. If I may paraphrase, he accused those who object to his logging activities of having a double standard, consuming wood and paper products while complaining about the very industry that provides them.

I must admit that I am troubled by this — I live in a beautiful wood house, pursue my work in a pole building, and consume far too much paper (though I keep trying without much success to convert this sea of documentation into an all-electronic form).

Like most people, I am in no position to claim that timber should never be harvested; I use “miracle fiber W” in countless ways.

So how do we reconcile this apparent hypocrisy? By Mr. Jones’ logic, I should be encouraging those who log Camano Island.

But there is a distinction that has to be made, and it goes beyond the obvious and common NIMBY (Not In My Back Yard) attitude.

Islands are fragile little ecosystems in all sorts of ways: a timber harvest that makes but a tiny dent in the vast forests of the Cascades would completely ravish Camano Island, and the DNR rules governing forest practices are scaled to the former.

But destroy a few dozen acres here and you completely alter the wildlife habitat, irreversibly impact aquifer recharge, and degrade the character of the place to the point that it even affects the tax base and tourism.

A slender island in Puget Sound is not the place for commercial logging. Our wetlands are scarce; our balance of development and nature is delicate; our appeal as much aesthetic as resource-based.

When I see abominations like the slash-pile wasteland south of the state park (“Old Homestead Road”), I cringe at what current land-use practices imply for our island’s future.

It’s all about greed, especially in today’s political climate; a few people profit while the community suffers.

Yes, we use wood products. We also use automobiles, but don’t want Ford to set up an assembly plant in the heart of Camano Island; we consume industrial components, but the tantalum mines and silicon foundries can stay put.

Every action involves a trade-off of benefit versus cost, and some environments suffer more from a given level of abuse than others.

Someday, we’ll use nanotechnology to assemble everything aiom-by-atom from the ground up and ditch dirty industries altogether, but in the meantime let’s respect the unique delicacy of where we live, even as we participate in the global economy.

I understand how this can sound hypocritical to one in the business of logging. “Let’s gobble resources, but make sure they come from elsewhere!” But harvesting our own fragile little island is akin to selling off one’s organs to pay the bills: a painful short-term fix that is ultimately self-defeating.

We own 11 acres of forest, but even in economic down times it never even occurs to us to sell the timber… we care about our neighbors and the future of the island.

To be fair, let’s approach this from two angles: reduce logging impact on the island, but also recycle and increase efficiency to reduce our demand on the world at large.