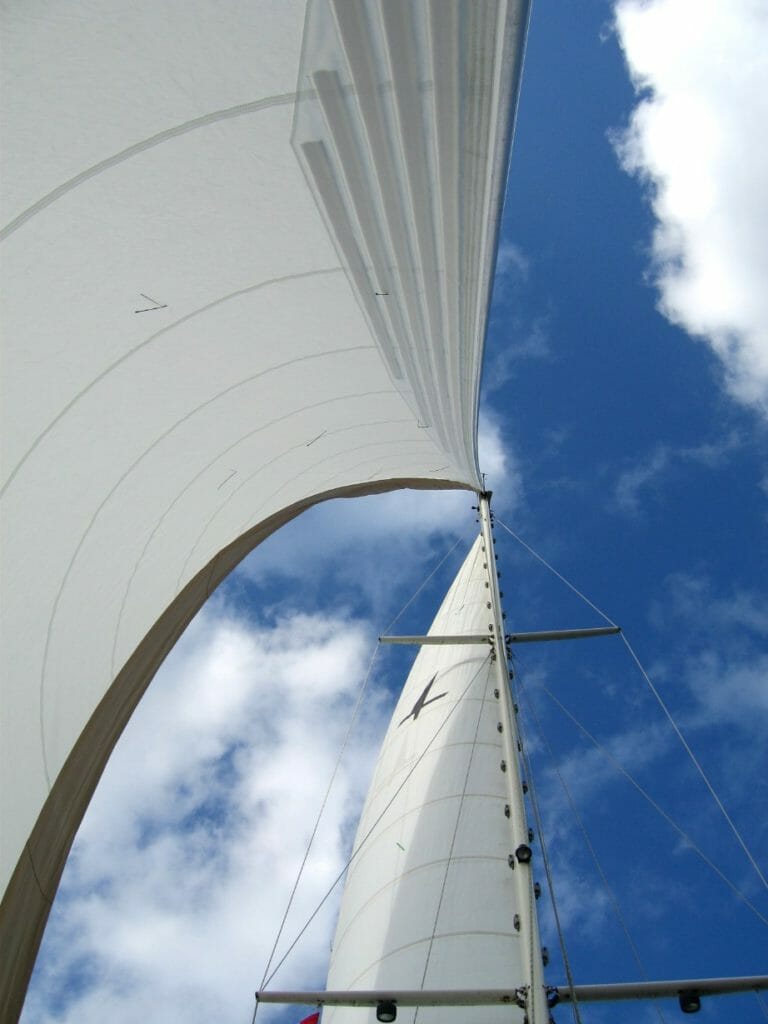 A great mode shift is about to occur… re-entry into the US and a sudden whirlwind of projects to begin the final phase of making the full-time transition to water. I’m rafted in the rain to a mighty ketch in Saanich Inlet, headphones pumping An Tua, genset thrumming coulombs, Sky ashore with friends, Java padding ‘twixt boats, tea steaming… and the thought of the upcoming commute between lab and marina with a truckload of tools is, frankly, ridiculous.

But it is going to have to happen. Two months and about 600 miles have taught many a lesson and re-ordered my once-fanciful to-do list. If Nomadness is to move beyond the seasonal cruising level, which she must, then she has to go under the knife from stem to stern.

Much of it has already been discussed in these posts, the various systems that must be brought up to snuff and the layer of integration that ties them all together. That’s the fun stuff, at least in principle, and I’m actually looking forward to it… the Inner Geek rubbing hands together in metaphysical glee at presiding over a system architecture reminiscent of TNG-era Star Trek, enhancing my primitive humanoid sensorium whilst linking ships into a fleet across multiple communication modalities and providing the tools of a long-range voyage of discovery. What’s not to love about that?

It’s the missing team of white-jacketed engineers and technicians swarming over the vessel to make it all happen on a tight schedule, that’s what! I reminisce fondly on the BEHEMOTH era, the bikelab at Sun Microsystems a sort of skunkworks that attracted all sort of brilliant folk who took breaks from their real work to inject wizardry into something that became larger than any of us. (“Thanks for reminding me of why I became an engineer,” quoth one fellow, beating me to the gratitude punch.) Part of the reason this worked so well, I believe, is that bicycles are accessible, and the sheer lunacy of BEHEMOTH technology atop a pedal-powered frame tickled the fancy of every grown-up kid who once pedaled the neighborhood with visions of rocketing onward, unfettered, forever.

The Microship, years later, held much of that allure (after all, it was a canoe at its core, and had pedals), though moving from Silicon Valley to the remote woods of Camano Island didn’t help in the volunteer department. When that dragged on for too long with too little fun, it became a rather lonely enterprise, and the once-thriving network of technomads and exuberant fellow geeks moved on, grew up, settled down, kicked back, and put their attention elsewhere… constructively commenting on my postings, perhaps, but rarely pulling all-nighters to get me out of town.

Fast forward a decade. I’m still layering seductive gizmology atop mobile platforms, but it’s now on a very different scale. Here we were a few days ago, in Genoa Bay (Nomadness is the petite one):

That’s 56 tons of collective boat, one a delicious old ferro-cement ketch with an interior built for comfort, the other a steel pilothouse cutter that’s almost austere inside. The ketch is a gem, conventional wisdom about ferro aside, and her skipper has continually refined her with a sort of laid-back passion and an inspired thrifty funkiness that makes me embarrassed at how much I’ve spent on some of the blinky bits that still don’t work properly.

I juxtapose these in the context of the BEHEMOTH bicycle to make the point that pulling together a project on this scale is a completely different game. It will never fit in a sponsor’s trade-show booth, it won’t roll onto a stage for an hour of engineering yarns and puns about unixcycles, and few folks grew up with one in the back yard that they could hop on whenever struck by a restless urge. People who do love working on these things already have boat projects of their own (or charge lots of money for their time), and the logistics of a skunkworks-style project are complicated by the remoteness of marinas or the bandwidth-limiting nature of the dinghy.

And so, it’s likely to be a rather solitary venture, this upcoming winter of geekery. Sky is always eager to help and can wriggle into tight places like a contortionist, but I’m going to have to hold it all together.

That brings me to my favorite new tool, OmniFocus. I’ve always broken projects into Clearly Defined Tasks and made a science of project management, but in recent years the culture of Getting Things Done has elevated that to an art form and moved well beyond my own methods. I won’t attempt to summarize GTD here, but will admit to having tried three pieces of Mac software over the years that purport to implement the principles… but none of them felt like home. As such, I’ve continued with my quirky blend of notebooks and outline files, fully recognizing that the occasional fleeting sense of having things under control was very much an illusion.

But OmniFocus is amazing. Although I’ve only been using it for a week, I am already seeing it as a lens that sharpens my awareness of what has to be done next. The myriad tasks spread over nearly a hundred projects each have modal contexts and priorities, and instead of browsing pages of to-do lists I just say, “OK, so I’m here with these tools, and in this particular mood, and I have about this much time. What would move me forward most efficiently?” As one who quickly crumbles into 100% context-switching overhead when trying to juggle more than two or three simultaneous jobs, this is brilliant… and the Mac integration is so smooth that it’s actually sexy. I can even snag a task from the middle of an email and lob it over to OF without having to context-switch to “project management” by opening the app!

So, I was just on the verge of talking about some of those projects, but I’m going to resist that temptation… there will be plenty of time for that as I actually do them. This is still the moment for floating over a constellation of jellyfish, watching counter-rotating dinoflagellate bioluminescent swirls from dinghy oars, hoisting the sails for a long reach, fragrant curry and music jams with new friends, lazy rainy mornings with droplets spattering hatches, catching a lift from a tidal current, pulling off a tricky maneuver on the first try, landing on uninhabited islands, and dreaming of the way it’s all gonna be when OmniFocus tells me that there’s simply nothing left to do except cast off the docklines…