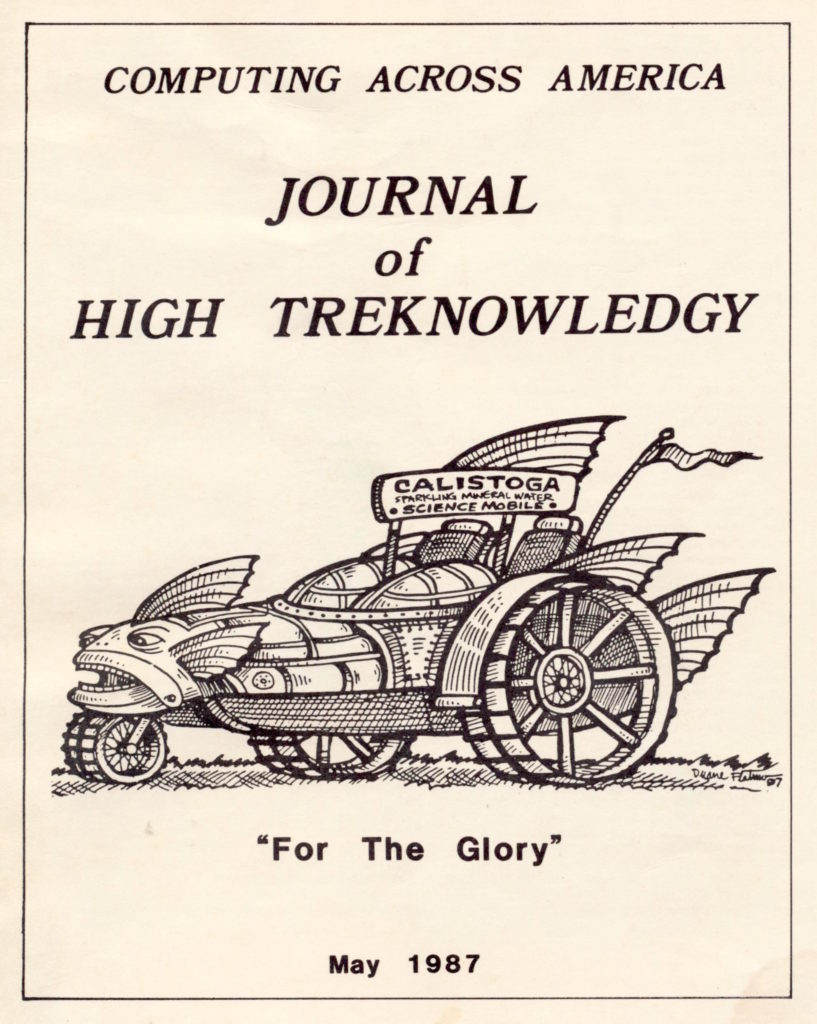 Eureka? Again? Is this a time-warp? If you’ve been following these tales for any time at all, you know we spent five weeks here over the winter… and you also know that we couldn’t have possibly pedaled back up the coast as fast as the date on this column would suggest.

Well, we still have the van. Though vaguely embarrassing for a die-hard long-distance cyclist, it offers considerable flexibility… especially when it comes to high-speed spatial relocation for events like the 14th Annual World Championship Great Arcata-to-Ferndale Cross-Country Kinetic Sculpture Race.

We threw everything in the van, turned a key, sat for a few hours, then abruptly found ourselves in Chico — out in the flat farmlands of a whole different California. Not even unpacking the bikes, we dropped off the boxed trappings of our Palo Alto layover, visited with the publisher of the Journal of High Treknowledgy, Ray Rolls, and hit the road again, winding along route 299 until — surprise — we were in Eureka. This is a maddening way to travel: too fast. The world drifts by, much too easily, the hills so smooth that hardly a drop of sweat rises between sea level and 3,000 feet. No sense of transition zones, no subtle cultural shifts… not even any of those invigorating moments of panic as logging trucks crowd you to the cliff-edge…

So here we are in Eureka again, complete with bona fide press passes emblazoned with the sacred kinetic chicken icon. The rest of this chapter will be written at odd moments, in the tent and on beaches, in restaurants and on the bike, whenever the swirl of events threatens to overflow the looniness buffer…

It’s midnight, twelve hours until the 1987 field of kinetic sculptures explodes from the Arcata plaza in their annual quest for glory. The frenzy is tangible, the air thick with the fumes of last-minute epoxies and paints. All over Humboldt County, exhausted builders are oiling chains, attaching flotation gear, touching up paint jobs, and tweaking their baroque mechanisms of brass and fiberglass.

Elsewhere, in a mad, sordid tangle of machinery on the waterfront, a dozen or more people struggle with two other machines. June Moxon’s all-woman team fashions a giant pink high-heeled shoe around a mega-tricycle with hydraulic disc brakes; Ken Beidelman’s crew debugs the rudder control linkage and works on final aesthetics of the synthesizer-equipped Bionic Blue Coach. The scene is repeated, with madness the common theme, in some 40 other garages.

Yes, it’s Kinetic Eve, and for once my compu-bike is in the background. This weekend I plan to be audience instead of show, and the feeling is deeply refreshing.

I hear rumors there’s another race going on today — something having to do with Indianapolis and fast cars. Sounds rather boring. I’m trudging instead over dunes of ankle-deep sand, my bike in the care of the Army, my binoculars trained on distant colorful specks being pushed, dragged, or pedaled slowly along the beach.

Two thousand miles east, hard-core muscle cars roar in a hydrocarbon haze around a monotonous oval track while thousands of race fans secretly wish for accidents. Here in Humboldt, the costumed victims of kinetic fever pedal their homebrew machines over a 38-mile course of land, sand, sea, and mud. After a noon LeMans start in Arcata, 43 contraptions have come here to Dead-man’s Drop — where loose sand and gravity conspire to bring all but the most determined racers to a frustrating halt.

The sight is at once inspiring and ludicrous. Inching painfully up slopes that are exhausting on FOOT, the biomechanical absurdities struggle to the top. A giant Conestoga wagon, complete with copper pots. A Tin Lizzie. A people-powered bus weighing one ton. A mini starship enterprise. A taco. The Rhino, last year’s winner. A host of fanciful yet functional machines, and many that are one or the other but not both. And, of course, the Science Mobile, the Heel-a-Copter, and the Blue Coach, creations of our Eureka friends.

To “ace” this race, riders have to complete the course under their own power with no pushing… so the wheels sink in; the riders sweat and grunt; rhythmic pedal thrusts yield tiny, incremental gains. All around them is confusion: the whoops and cheers of the crowd, the relentless buzz of motorized dune machines (that’s cheating…), the urging of pit crews, and a whole bevy of race officials timing, judging, and carefully scrutinizing would-be aces.

Top of the Drop: they stop, plop, pop a Calistoga top, mop off the sweat and relax, staring nervously down a hundred or so feet of 50% grade ending in a sharp turn between two hard trees. The crowd’s tension is tangible; the Army waves them back to clear the course. Some teams plunge downward with only a deep breath to reveal their fear; first-timers pause on the precipice and mutter something about suicide, then release the brakes with a shout and give themselves over to gravity. The crowd closes in behind and watches, anxious and wide-eyed… doubtless with a touch of the same morbid excitement that energizes the Indy crowd. Nobody gets hurt, but everybody experiences the mad rush of adrenaline, that oh-God-I-must-be-crazy moment of pure terror when you let go of the strut and watch the plane fly away without you.

Sunday night, Table Bluff. Another beery event. I sit in my tent as the fabric around me billows in chill evening breeze, the rain mercifully past. Outside, in all directions, a party rages on — fueled by an open bar, driftwood fires, and the relentless enthusiasm of this playful microculture.

Yes, it has been quite a night. On a windswept dune the banquet was laid, a gift from Blue Coach sponsor Fred Deo: candelabras, linen tablecloths, fine china, champagne, a crew of eight, and a spread of robust delicacies far removed from the usual camp fare. Deviled eggs with caviar. Crab Louie. Peel ‘n eat shrimp. Pickled okra. Exotic salads, artichoke hearts, and the requisite assortment of cakes. All this naturally spawned no end of toasts and banter, as over 50 of us sat in the cold drizzle, folding chairs sunk to their cross-members in soft sand, the violent appetites of hard miles the irresistible force that easily conquered plates piled high with exquisitely movable objects.

All this followed day 2 of the race. At 8 AM, the sculptures began hitting Humboldt Bay…

Pausing long enough to check their flotation and propulsion systems, the riders ran the twin gauntlets of amplified razzing by The Great Razooly and the relentless press of the crowd. Then… down the ramp and <splash!> into the Bay. At this point, subtle differences in machine design philosophy became as obvious as they had been on the loose, sucking sand of Dead-man’s Drop. Some smoothly took to the water, kicked up a mini rooster-tail from their paddlewheels, and easily made the 2-mile crossing to Table Bluff. Others floundered as their drive systems tangled with seaweed; still others discovered fundamental flaws with untested last-minute flotation apparatus and began the slow, depressing process of sinking. The unlucky were towed ignominiously across the bay, while others made the trek in an hour or so and emerged amid cheers on the other side.

I went around the long way, over the hills, pedaling with Maggie and the trailer-borne trappings of our life. Occasionally, groups of spectators would shout: “Hey! You’re going the wrong way!” To further confuse these less-perceptive onlookers, I masking-taped a thin strip of styrofoam on my fairing and told them it was flotation gear…

The evening beach party grew boisterous, with a whole population of crazies gathered around the driftwood fire in this tent city, swapping kinetic tales and generally whooping it up. But strange machines lurked in the dunes to surprise the unwary — I crawled wobbly from my tent in the middle of the night and came face-to-face with a giant blue dragon, luminous in the smoke-diffused glow of a dozen campfires.

This IS a normal Monday morning, isn’t it? I awoke to the patter of rain on the megatent, started coffee, and listened to the hungover grumbling stirs of the kinetic yankees as they blinked away the grit of a too-short night on a too-lumpy dune. Cold, windy rain. Greasy hands numbly tweaking black, water-beaded drive components. Forced grins, the camaraderie a dim shadow of their earlier exuberance.

One by one, leaving tractor tracks in the wet sand, they rolled off into the murk, bound for Drizzle Point, two crossings of the Eel River, and the infamous Slimy Slope that greets the first arrivals with mere mud and torments latecomers with the deep mucus of well-churned, organically rich swampland.

We dozed in the rain until the dunes were vacant and only the smoldering campfires and logistically detailed 2-meter net traffic remained as evidence of our friends’ 3-day ordeal. For the glory…

So. Here we are, again in Eureka, in the home of Duane and Micki as if the past 5 months never happened. Only now, the last set of bike problems has been replaced by a new set, and out there on the street is the brown van with WORDY license plate — part nemesis, part convenience. We have complete freedom of choice now: there’s no compelling reason to drive south and leave from the Bay Area… nor do I feel like pedaling away from here (with 150 miles of narrow, winding, logger-infested road between Eureka and the next major town).

So maybe we’ll drive to Seattle and head east into the Canadian Rockies. Or maybe we’ll drive around and do show-n-tells for our equipment sponsors until the publisher gets my long-overdue book printed and renders all this media coverage useful. Hell, maybe we’ll rent a house and build a kinetic sculpture, surviving on odd jobs and long-distance freelancing in this land of faltering economy in our own quest for glory. Or maybe we’ll… well, who knows. I’ll tell you after we do it.

I suppose too many options are better than too few, though sometimes I envy those who don’t spend part of every day grappling with trade-offs.

Off to bed. We’re all suffering from PKSD (Post-Kinetic Stress Disorder), and all this talk of pedaling wipes me out.