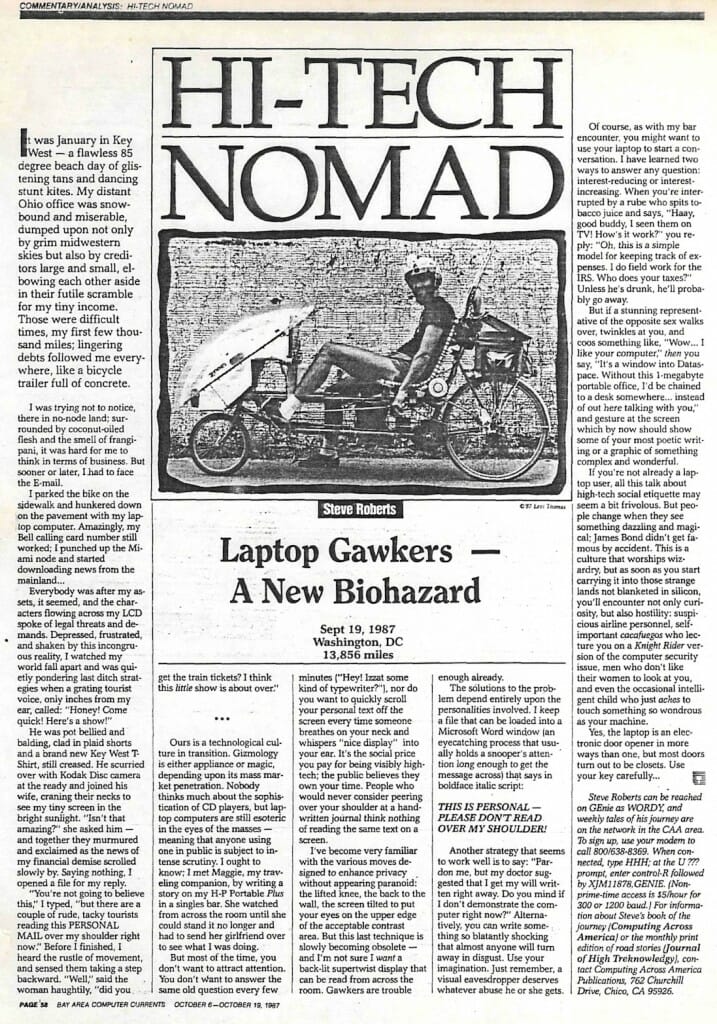 I hardly need to write an introduction to this one… I bet most people reading this have had the uncomfortable experience of being on a plane or other public place, trying to work, and realizing that a seatmate or other stranger is reading the screen. You squirm to change the angle, switch to another task, or give up entirely… anything other than confront the intruder. This is not a new problem, and back in the Old Days it was exacerbated by the sheer novelty of portable computing tools. I wrote this while bicycling down the east coast of the US in 1987… the piece was uploaded from Washington DC on September 19, with the bicycle’s odometer at 13,856 miles.

It was January 1984 in Key West — a flawless 85 degree beach day of glistening tans and dancing stunt kites. My distant Ohio office was snow-bound and miserable, dumped upon not only by grim midwestern skies but also by creditors large and small, elbowing each other aside in their futile scramble for my tiny income. Those were difficult times, my first few thousand miles; lingering debts followed me everywhere, like a bicycle trailer full of concrete.

I was trying not to notice, there in no-node land; surrounded by coconut-oiled flesh and the smell of frangipani, it was hard for me to think in terms of business. But sooner or later, I had to face the E-mail.

I parked the bike on the sidewalk and hunkered down on the pavement with my laptop computer. Amazingly, my Bell calling card number still worked; I punched up the Miami node and started downloading news from the mainland…

Everybody was after my assets, it seemed, and the characters flowing across my LCD spoke of legal threats and demands. Depressed, frustrated, and shaken by this incongruous reality, I watched my world fall apart and was quietly pondering last ditch strategies when a grating tourist voice, only inches from my ear, called: “Honey! Come quick! Here’s a show!”

He was pot bellied and balding, clad in plaid shorts and a brand new Key West T-Shirt, still creased. He scurried over with Kodak Disc camera at the ready and joined his wife, craning their necks to see my tiny screen in the bright sunlight. “Isn’t that amazing?” she asked him — and together they murmured and exclaimed as the news of my financial demise scrolled slowly by. Saying nothing, I opened a file for my reply.

“You’re not going to believe this,” I typed, “but there are a couple of rude, tacky tourists reading this PERSONAL MAIL over my shoulder right now.” Before I finished, I heard the rustle of movement, and sensed them taking a step backward. “Well,” said the woman haughtily, “did you get the train tickets? I think this little show is about over.”

Ours is a technological culture in transition. Gizmology is either appliance or magic, depending upon its mass market penetration. Nobody thinks much about the sophistication of CD players, but laptop computers are still esoteric in the eyes of the masses — meaning that anyone using one in public is subject to intense scrutiny. I ought to know; I met Maggie, my traveling companion, by writing a story on my H-P Portable Plus in a singles bar. She watched from across the room until she could stand it no longer and had to send her girlfriend over to see what I was doing.

But most of the time, you don’t want to attract attention. You don’t want to answer the same old question every few minutes (“Hey! Izzat some kind of typewriter?”), nor do you want to quickly scroll your personal text off the screen every time someone breathes on your neck and whispers “nice display” into your ear. It’s the social price you pay for being visibly high-tech; the public believes they own your time. People who would never consider peering over your shoulder at a hand-written journal think nothing of reading the same text on a screen.

I’ve become very familiar with the various moves designed to enhance privacy without appearing paranoid: the lifted knee, the back to the wall, the screen tilted to put your eyes on the upper edge of the acceptable contrast area. But this last technique is slowly becoming obsolete — and I’m not sure I want a back-lit supertwist display that can be read from across the room. Gawkers are trouble enough already. The solutions to the problem depend entirely upon the personalities involved. I keep a file that can be loaded into a Microsoft Word window (an eye-catching process that usually holds a snooper’s attention long enough to get the message across) that says in boldface italic script:

THIS IS PERSONAL —
PLEASE DON’T READ
OVER MY SHOULDER!

Another strategy that seems to work well is to say: “Pardon me, but my doctor suggested that I get my will written right away. Do you mind if I don’t demonstrate the computer right now?” Alternatively, you can write something so blatantly shocking that almost anyone will tum away in disgust. Use your imagination. Just remember, a visual eavesdropper deserves whatever abuse he or she gets.

Of course, as with my bar encounter, you might want to use your laptop to start a conversation. I have learned two ways to answer any question: interest-reducing or interest-increasing. When you’re interrupted by a rube who spits tobacco juice and says, “Haay, good buddy, I seen them on TV! How’s it work?” you reply: “Oh, this is a simple model for keeping track of expenses. I do field work for the IRS. Who does your taxes?” Unless he’s drunk, he’ll probably go away.

But if a stunning representative of the opposite sex walks over, twinkles at you, and coos something like, “Wow… I like your computer,” then you say, “It’s a window into Dataspace. Without this 1-megabyte portable office, I’d be chained to a desk somewhere… instead of out here talking with you,” and gesture at the screen which by now should show some of your most poetic writing or a graphic of something complex and wonderful.

If you’re not already a laptop user, all this talk about high-tech social etiquette may seem a bit frivolous. But people change when they see something dazzling and magical; James Bond didn’t get famous by accident. This is a culture that worships wizardry, but as soon as you start carrying it into those strange lands not blanketed in silicon, you’ll encounter not only curiosity, but also hostility: suspicious airline personnel, self-important cacafuegos who lecture you on a Knight Rider version of the computer security issue, men who don’t like their women to look at you, and even the occasional intelligent child who just aches to touch something so wondrous as your machine.

Yes, the laptop is an electronic door opener in more ways than one, but most doors turn out to be closets. Use your key carefully…