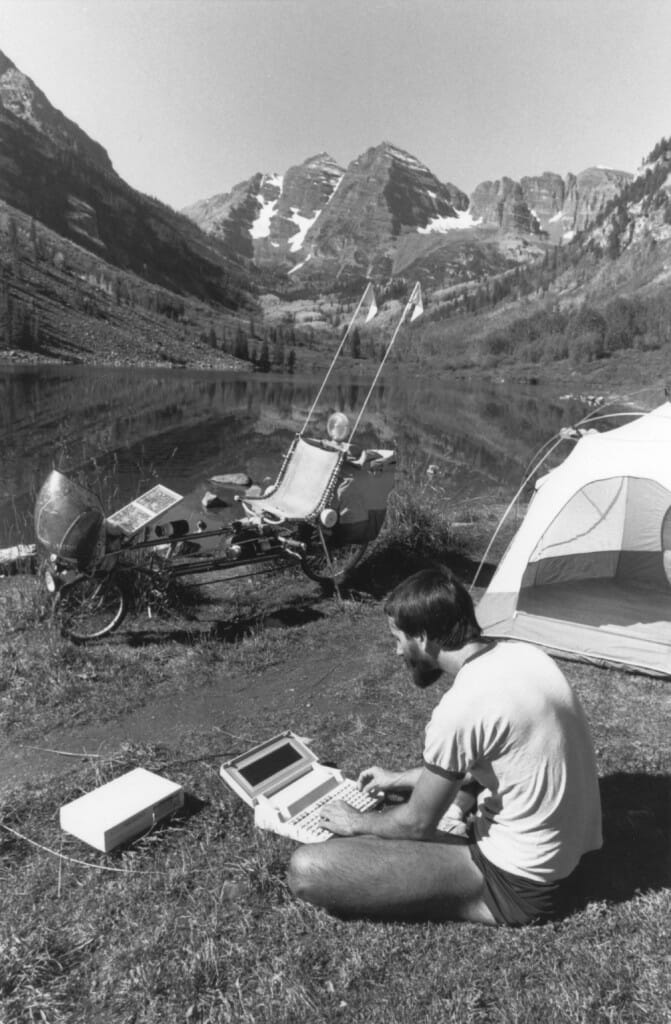 I wrote this after the first 10,000 miles but before launching the Winnebiko II project, so it’s a nice perspective on my newly minted technomadic life, more philosophical than technical. The photo above is by Jeffrey Aaronson, taken at the Maroon Bells near Aspen on September 15, 1984.

I suppose the best way to begin an irregular series of contributions (or, more accurately, a series of irregular contributions) is with a sort of introduction. You may have heard of me over the last two years: I have become mildly (in)famous as the wandering “high-tech nomad.” I live… on a bicycle.

Despite occasional bouts with weather, gravity, and loneliness, full-time life on an 8-foot-long recumbent has been amazingly successful (even profitable). This can be attributed not so much to the underlying madness of the 10,000-mile journey as to the technology that ties it all together — the same technology that keeps this magazine in business. With my Hewlett-Packard Portable PLUS nestled under a rainproof cover, I am no more out of touch in Muleshoe, Texas, than I am in Metropolis.

This adventure (dubbed “CAA” in honor of my forthcoming book: Computing Across America: The Bicycle Odyssey of a High-tech Nomad) has become a proving ground for the tools of telecommuting. Since I’m anything but wealthy, I must maintain an active freelance-writing business on the road — plying my trade from this fragile electronic cottage on wheels. Somehow, despite my general preference for play over work, it seems to work.

But it never would have happened without “online.”

Doing business in the nomadic mode involves a sharp departure from traditional methods. I have to maintain the illusion of “stability” while living full-time on a bicycle, a difficult trick even with the latest technology. The structure that evolved is based on a carefully integrated quartet of support facilities:

The combination of these four elements has allowed me to decouple from the grind. Even as a freelancer, this is a classic problem: the feeling of being chained to a desk doesn’t automatically go away just because you happen to own the desk.

Somewhere in the wilds of America a transition occurred — a change so subtle that attempting to pinpoint it is like trying to identify the exact moment of reaching adulthood. In the act of pedaling around rootless in physical space, I have become a citizen of Dataspace.

This has interesting implications. Given my computer and a modular phone jack, I have been comfortable and stimulated in some rather questionable places. The thought of unplugging from the network is now much more frightening than was ever the thought of leaving suburbia.

Of course, I have no such intentions. How could I bid farewell to my enclave of stability, my circle of electronic friends? I have grown so accustomed to “just passing through” in these last ten thousand miles that I have come to think of CompuServe as home — for this is a place that is everyplace at once, a place outside the strictures of physics. The network is a village shaped like a map of North America, a region populated by spectres and ghosts, travelers in Dataspace.

I have been living two dramatically different lives. One is visceral, sweaty, attuned to every hill and headwind. The other is ethereal, intellectual, an electronic interlocking of imagination and communication. I am at once a being of cloud and soil, satellite and bicycle. It is inevitable that after nearly two years of this, the network has come to seem every bit as real as the physical world lying beneath it. That alone is intriguing, but the long-term psychological effects are downright provocative.

First, there is the inevitable result of not being able to see my online friends: prejudices have become obsolete. When we meet online, we interact as pure intelligences, our mutual perceptions unaffected by the visual cues that bias face-to-face encounters. People who are old, ugly, crippled, blind, fat, burned, or deformed have brains like everybody else — but in typical social settings they pay a stiff penalty for their appearance. Not in Dataspace. This anonymity is sometimes abused, but it opens many a door that would otherwise remain locked.

It was months before I met my best friend in person, and naturally, I have fallen in love online.

But the most notable effect of satellite-borne socializing is a general shift of perspective from local to global, and this may be the essence of future historians’ assessment of our growing electronic society…

Global perspective. Its opposite shows up in various forms — as the naive belief that nuclear waste is someone else’s problem, as the feeling that people of other cultures are somehow less valid than we are. It seldom occurs to the average media-fed American that we’re all in this together — you, me, them, and the Russkies too. Just view the world from the standpoint of an incoming starship, and much of human behavior seems absurd indeed.

It’s an interesting effect of life online that the physical locations of friends become a mere curiosity — like their birthdays or alma maters. We’re a long way yet from having a worldwide network population, but the early effects are clear: nobody thinks it at all strange to become close to people far away.

And with this shrinking of the world there comes a sense of unity, of belonging to something bigger than a town, state, or nation. This has changed me, making the journey seem like a succession of local images viewed against the backdrop of a stable life in Dataspace. I don’t live in a human-powered motorhome at all.

I live in a computer-powered infohome.