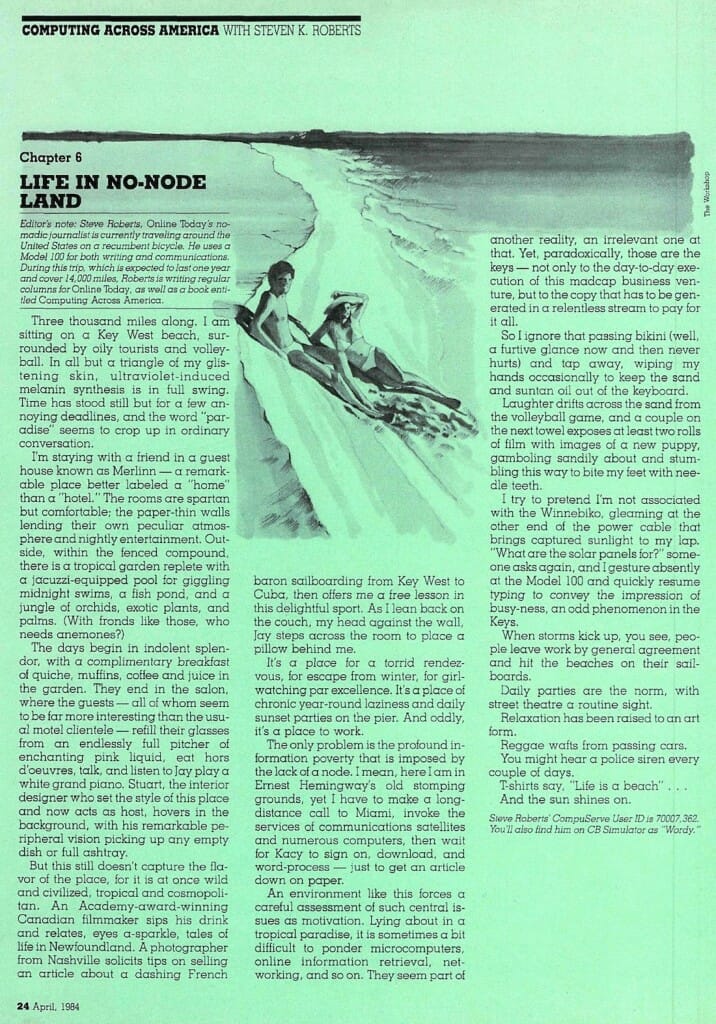 This is the print version of my online column on CompuServe (arguably, the first travel blog, though of course “blog” had no meaning yet). Here, I was blissfully immersed in Key West while my old Ohio home was freezing… the story was written on the beach in January, and references “the ultimate blind date” that was underway after first meeting online (a rarity back then). I also comment on the difficulty of getting online in paradise.

Three thousand miles along. I am sitting on a Key West beach, surrounded by oily tourists and volleyball. In all but a triangle of my glistening skin, ultraviolet-induced melanin synthesis is in full swing. Time has stood still but for a few annoying deadlines, and the word “paradise” seems to crop up in ordinary conversation.

I’m staying with a friend in a guest house known as Merlinn — a remarkable place better labeled a “home” than a “hotel.” The rooms are spartan but comfortable; the paper-thin walls lending their own peculiar atmosphere and nightly entertainment. Outside, within the fenced compound, there is a tropical garden replete with a jacuzzi-equipped pool for giggling midnight swims, a fish pond, and a jungle of orchids, exotic plants, and palms. (With fronds like those, who needs anemones?)

The days begin in indolent splendor, with a complimentary breakfast of quiche, muffins, coffee and juice in the garden. They end in the salon, where the guests — all of whom seem to be far more interesting than the usual motel clientele — refill their glasses from an endlessly full pitcher of enchanting pink liquid, eat hors d’oeuvres, talk, and listen to Jay play a white grand piano. Stuart, the interior designer who set the style of this place and now acts as host, hovers in the background, with his remarkable peripheral vision picking up any empty dish or full ashtray.

But this still doesn’t capture the flavor of the place, for it is at once wild and civilized, tropical and cosmopolitan.   An Academy-award-winning Canadian filmmaker sips his drink and relates, eyes a-sparkle, tales of life in Newfoundland. A photographer from Nashville solicits tips on selling an article about a dashing French baron sailboarding from Key West to Cuba, then offers me a free lesson in this delightful sport. As I lean back on the couch, my head against the wall, Jay steps across the room to place a pillow behind me.

It’s a place for a torrid rendezvous, for escape from winter, for girl-watching par excellence. It’s a place of chronic year-round laziness and daily sunset parties on the pier. And oddly, it’s a place to work.

The only problem is the profound information poverty that is imposed by the lack of a node. I mean, here I am in Ernest Hemingway’s old stomping grounds, yet I have to make a long-distance call to Miami, invoke the services of communications satellites and numerous computers, then wait for Kacy to sign on, download, and word-process — just to get an article down on paper.

An environment like this forces a careful assessment of such central issues as motivation. Lying about in a tropical paradise, it is sometimes a bit difficult to ponder microcomputers, online information retrieval, networking, and so on. They seem part of another reality, an irrelevant one at that. Yet, paradoxically, those are the keys — not only to the day-to-day execution of this madcap business venture, but to the copy that has to be generated in a relentless stream to pay for it all.

So I ignore that passing bikini (well, a furtive glance now and then never hurts) and tap away, wiping my hands occasionally to keep the sand and suntan oil out of the keyboard.

Laughter drifts across the sand from the volleyball game, and a couple on the next towel exposes at least two rolls of film with images of a new puppy, gamboling sandily about and stumbling this way to bite my feet with needle teeth.

I try to pretend I’m not associated with the Winnebiko, gleaming at the other end of the power cable that brings captured sunlight to my lap. “What are the solar panels for?” someone asks again, and I gesture absently at the Model 100 and quickly resume typing to convey the impression of busy-ness, an odd phenomenon in the Keys.

When storms kick up, you see, people leave work by general agreement and hit the beaches on their sailboards.

Daily parties are the norm, with street theatre a routine sight.

Relaxation has been raised to an art form.

You might hear a police siren every couple of days.

A much more detailed version of this story is Chapter 19 of Computing Across America, with full-text online here: “The Ultimate Blind Date.”