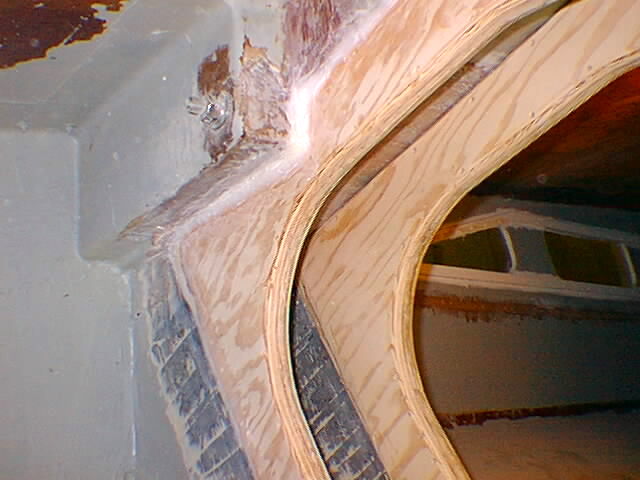 The structural bulkheads are almost done! This is one of those cases that clearly demonstrates the fundamental truth of the Roberts Law of Non-Triviality: “There is an inverse relationship between the number of words required to describe a task and the amount of time required to complete it.” Something to do with the What-How spectrum, I think…

Task: Build a couple of bulkheads with pass-through openings and glass them into the space bounded by the mast step, crossbeam, and structural vees. This was mentioned in a rather offhand manner in our last report, characterized as the minor detail required to complete the mast support structure.

Ahem. Well, I began by using a tick-stick and some recycling-bin cardboard to make a pair of templates — becoming aware in the process of the amazing lack of symmetry between sides, each other, and anything else measurable. I’ve heard that one shouldn’t get too upset about such things, however — apparently the slow side of your boat has no trouble keeping up with the fast side. So I ignored the ugliness and pressed on with design of the passageway.

Now this sounds easy, but the trick was not only to establish a gently radiused shape with adequate structure, but also to perfectly align the two openings in these parallel bulkheads (9″ apart, corresponding to the boat’s existing structural members associated with the mast and forward crossbeam). Achieving perfect angular registration between two giant holes with straight sides and party-tray radiused corners is a challenge when there is NO edge, point, centerline, or anything else to use as a reference. This translated into a lot of fiddling time, but I finally had pretty cardboard templates all duct-taped together and wedged gently into the boat… calling for a long interval of daydrea– I mean, conceptual design and visualization.

Shaking off the lethargy, I transferred the first bulkhead pattern onto a $60 sheet of 1/2″ ABX marine plywood, noting with some annoyance the fact that it was necessary to make it in two parts since the full-size version would not fit through the companionway. The bottom triangle (about 16″ tall) would have to plug into the main bulkhead using a spline joint.

In an earlier report, I may have mentioned the original plan — a single sheet of ply with “doublers” on each side (becoming triplers, I guess) around the perimeter and the door opening. This would have led to a rather ugly fiberglass layup with many transitions between levels (read: lots of filleting and radiusing), so on David Berkstresser’s suggestion I inverted the whole thing to a pair of plywood skins and a thin strip between them around door and perimeter. The result is an air-core structure that is smooth and easy to glass into the hull.

The work was time-consuming, but went well — about a dozen plywood parts for each bulkhead plus the skins (and a lesser but equivalent project for the bottom triangles). I coated all the parts with slightly thickened epoxy (microfibers) and bonded the 1.5″ sandwich in two steps, using about 75 drywall screws for temporary clamping pressure. The bulkhead’s bottom was left open to accept the spline in the triangle, with final assembly to take place just before installation inside the boat. I prettied up the doorway (and made glassing possible) by routing a .5″ radius all the way around on both sides, followed by a general sanding.

This whole assembly was then cloned for the second bulkhead, followed by the ugliest job of all — extensive disk sanding and sweaty wrestling in order to fit them into their nests. I tend to cut a wee bit large on the theory that removing material is easier than adding it, but now that I have epoxy and filler I’m questioning this long-standing philosophy…

Once all this was done, I left the two bulkheads in place and stared at them some more (deeply pleased when David wandered by, took a look, and said, “hey, that’s furniture!”). Before the final step of making them a permanent part of the ship, I’m defining the space between them:

At this writing, I have just finished all the itchy nasty evil grinding of the original fiberglass, carbon, epoxy, filler, and paint — much of which is now in my clothing, bedding, computer, food, ears, and pores. The bulkheads are ready to glass in, however, and I’ve just finished the battery bay. A whole box is about to be colored yellow on the PERT chart!

A Potpourri Of Updates

That project has been the main focus since the last report, but as usual there have been a lot of other activities and adventures of note.

First, in Tarpon/Newton news, Digital Ocean has shipped a charging base and Allpen has gotten involved in the form of ongoing help from T. Erik Browne… as well as the upcoming use of their NetHopper Newton web browser for the ship’s “Intranet.” We’re going to do all online documentation and reference material in HTML instead of the Newton Book format, which, although robust, is harder by far to update since it requires lengthy compilation. Erik spent Saturday evening here imparting a much-needed general learning curve on the Newton programming environment (which is amazingly cool), and he and Chris Burmester are now both involved in writing comm and front end tools with the intent of delivering a robust framework for easy addition of my own view designs.

Speaking of interesting people, we’ve had more technomadlings visiting the lab lately. First, we picked up Almitra (the Photo Gypsy) after my talk at the Art Center in Pasadena a couple of weeks ago, and brought her back here in the mothership. She’s a photographer and long-time traveler about to launch a solo trans-Australian adventure on foot. We helped a bit with solar, trailer, and computer issues. And our lab guest at the moment is Blase Bova, pedaling his way south from Oregon. Blase is just launching Trike Trek, a 10-year recumbent tricycle adventure around the world. His stories are well-written —

A thank-you goes to Ron of Stuart and Sons, the electrical contractor across the parking lot from NRL. Our wiring here was the haphazard legacy of previous tenants who disconnected all their special 3-phase stuff, leaving minimal 110V outlets in the places we need them most. Ron came over on a Sunday and added lots of outlets on separate circuits, eliminating my personal-best record of 13 daisy-chained outlet strips under a 24-foot string of worktables!

Other thanks this issue go to Leonard Edmondson, who donated a one-month supply of Super Blue Green Algae to see if I like it (I don’t know yet — just started today… though ANYTHING that might raise my general energy level is of strong potential interest even if it is associated with multilevel marketing). I’d also like to acknowledge my bio-mom Sylvia Nelson, who made a small cash donation to the project in memory of my biological father who passed away last month… as well as my father, Ed Roberts, who made another contribution to speed things along and get this boat on the water. We’ve also had a few individual cash donors over the past couple of years, and I’m compiling a list to post on the web site unless anonymity is requested.

Speaking of help in various forms, I’d like to ramp up the volunteer system again. As many of you know, we had a volunteer party long ago, and although we have wonderful ongoing help from a few folks, there are growing opportunities for more now that things are much better defined. If you’d like to see a list of projects and areas in which we can use volunteer help (most are best managed here on-site, but by no means all), please send me a note.

The Cyberlife piece on the Discovery Channel was quite good… and we’ve received over 100 pieces of email as a result (just what I need <grin>). Thanks to both Ed Roberts and Gary Fariss for catching it on tape for us…

In amusement news, we had a remarkable bit of fun the other day — being two of the first beta test drivers at the LBE Silicon Motor Speedway. A friend, Andrew Letton, is a mechanical engineer there, and I’ve been hearing tantalizing snippets about this system for a few months. Basically, this is a fully-immersive simulation of some wicked-fast 700 horsepower race cars: the vehicles are manipulated hydraulically to impart realistic feel, controls are tactile, and three screens fill the windshield view and quickly convince you that you’re on an oval racetrack, not in a Silicon Valley building. When another guy spins out, you see him sitting vulnerably along the wall on the banked turn; when you slam into him, both of you feel, hear, and see it (uh, yes, this is from experience). This is much more interactive and interesting than the various “rides” I’ve been on, and it’s vastly more engaging than any computer game involving screen and joystick. I half expected to be engulfed in real flames during one of my more dramatic screwups. I predict commercial success for these folks — they have some heavy technology, and obviously sufficient knowledge of racing car dynamics (and the surrounding culture) to pull off a very convincing simulation. Recommended!

At the other end of the speed spectrum, Dave Wright and I kayaked the mighty Alviso Slough last week… paddling slowly past relics of the past nestled in mud and reeds, home to sea birds and a lingering live-aboard culture. This is yachting after the apocalypse.

Finally, two comments in Issue #112 garnered responses that I’d like to pass along. First, you may recall my mention of Pen-BaseT as the name of our Newton-based control network. To this, Jim Rees of U Mich responded: “After I left your place and went to my conference in San Jose, I checked the paper for entertainment possibilities and was amused to see there was a band called 10BassT. Only in Silicon Valley!”

Jim has placed one of his photos of the Microship on his web site — you can get there via microship.com by clicking “Latest Images” under the new photo (thanks to Faun for the new front-page design). The frequent requests for more project photos have finally convinced me — we’re getting an Epson PhotoPC (Mac version) this week.

The other comment on the last issue is from Frank Sharp, captain of SV Hawkeye and all-around electronics/controls wizard: “I used so much West and filler that I took to buying it by the case, and the UPS guy planned his run to stop for morning coffee and stayed to kibitz….. you know you’ve been in the epoxy too long when you quit picking the little bits out of your hair, eyebrows, beard, etc. and just wait till you get time to trim…”

With that, I’m back to the boat… the last layup should be gelled by now and it’s time to slather on some more goo!