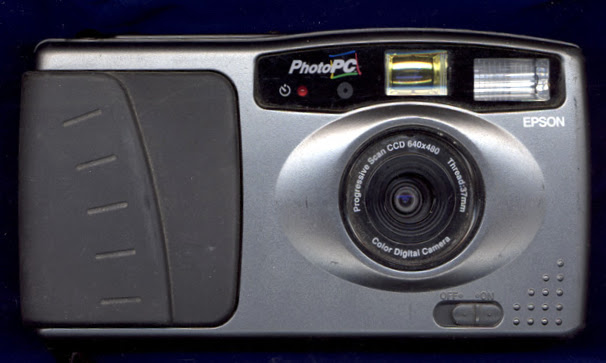 Five-year goal: Build the biggest computer in the world. One-year goal: Achieve one-fifth of the above.

In response to a growing volume of requests for images to go with these Microship updates, I finally acquired a digital camera (The Epson PhotoPC, Mac version). I already have various film cameras and a flatbed scanner, of course — but that’s too much work and not nearly immediate enough for this electronic venue. Frame grabs are easy to generate from any of the lab video sources, but NTSC lacks the image resolution needed for Web-published technical material (though my ComputerEyes/RT is a lifesaver for other applications). All this has added up to infrequent image updates on the web site, so last week I broke down and got the digital camera shown above.

From now on, each Microship Status report will contain references to a new set of four photos that will exist ONLY as long as the update remains current — we don’t have enough space on our web site to archive all of them, though the best ones will be moved to an online photo album with added captions. If you’re reading this on the Web and it is the latest update, the clickable link to the corresponding pictures is in the calling HTML document, not in the body of this file — crude, at first glance, but this allows the reports to remain straight text rather than HTML, letting me simply upload images and text to the same filenames every time without handing our overloaded webmistress yet another to-do!

So, I hope you enjoy the images. I’ll try to capture a mix of close-up technical detail, general boat and lab shots, interesting people, and hints of the adventure that awaits. If you have any specific requests, please let me know.

Incidentally, the PhotoPC camera is pretty cool. It’s bigger and clunkier than the Casio and lacks the nifty on-board color LCD and video RF output, but the final image quality is much better. The base version will store 16 24-bit color images at 640×480, or 32 at 320×240… and add-in “PhotoSpan” RAM cards are available to crank these numbers way up (to a max of 80/160 images of hi/low resolution). Interface to the Mac (or a PC) is trivial via a serial cable, and the camera can be manipulated directly by the computer for better control over close-ups and special effects (standard 37mm accessories fit the camera body). The EasyPhoto software that comes with the unit allows photos to be grouped intuitively into “galleries,” displayed as slide shows, or subjected to manipulation via the Workshop. My only complaint so far is that the Workshop software seems fragile — the Mac has crashed three times when loading and saving images, and neither Epson nor Storm Software tech support have answered my email. Fortunately, raw image transport from the camera seems quite stable and the JPEGs can be manipulated with PhotoShop if necessary.

I’m opting for a general update this time, partly because no major subsystem takes center stage and partly because I spent much of last week capturing the entire project in a rather intimidating 25-page outline.

The physical work completed since Issue #113 is still in the bulkhead department — incredibly time-consuming, but now almost done. In the last report, I mentioned that “the bulkheads are ready to glass in.” Well, there was one minor detail between shoving the wood assemblies into place and actually laying down uni, X-mat, and 10-oz cloth. For the fiberglass to lay well, a fillet of thickened epoxy was necessary all the way around both sides of both bulkheads (for Microship trivia buffs, that’s a total of 52 feet of filleting, requiring some 60 pumps of epoxy and most of a 6 oz container of lung-destroying ultralight colloidal silica). This tedious project included considerable mixing, shaping, sanding, and cleanup — all in small doses to allow previous work to cure. The days passed.

But at last it’s time to lay down some fibers! At this writing, I’ve just roughed up the surfaces with 80-grit to give the epoxy a bit more tooth (by default, this ended up being a 2-step process depending on mechanical bond rather than a 1-step chemical bonding — the new layup is tied into 13-year-old carbon fiber!). I’m now cutting strips of unidirectional S-glass and chunks of X-mat, and will spend tomorrow encapsulating the bulkheads into the structure of the ship.

As I mentioned, I spent quite a bit of time on the mega-outline — initially motivated by the quagmire of subsystem-specific TO-DO lists, random notebooks reflecting scattered brainstorming sessions, and countless Post-it notes marking articles of interest. The PERT charts on the wall still provide a high-level overview, but the thousands of gritty details needed to be collected into one easily-managed file.

Using Word’s outliner, therefore, I did just that — and the result has already helped by unambiguously demonstrating just how much has to be crammed into the 413 days remaining in our lease. About 2 things a day have to get crossed off the list, assuming no new ones get added (yeah, right), and some of those things — like fiberglass and software projects — tend to drag on for weeks.

So now that it’s somewhat better defined, I’m issuing a specific invitation to all present and wanna-be volunteers to step forward and get your name emblazoned on the Development Team plaque. (I’m not a great manager, but I’ll do my best to find something for you to do!) We also welcome donations of espresso beans, food, boat parts, excess employee time, cash, and any item on the growing equipment list — if you’d like to contribute on this level, please let us know and we’ll work with you any way we can.

Olympic racer and Sobstad sailmaker Mark Reynolds dropped by enroute back to San Diego from a regatta in the Bay, parking his Star boat in the lab all snuggled up to the Microship — an amusing juxtaposition. Rev. Mark Grant wandered by the lab on the final leg of his round-the-world journey — the technomads list has frequently benefited from his postings about cybercafes abroad and various nomadic connectivity issues. Jeff Alholm, president of Digital Ocean, spent a couple of hours here yesterday in a grand exchange of wireless networking insights and applications ideas. It was a pleasure to demo Chris Burmester’s initial Microship Tarpon application to the sponsor of the unit. Toshihiro Wakita (of Toyota’s Central Labs near Tokyo) and Kentaro Oguchi (also affiliated with Toyota, currently a Visiting Scholar at Stanford’s Knowledge Systems Lab) came by to see BEHEMOTH, talk about human-computer interaction in moving vehicles, and chuckle politely at my beginner-level Japanese. Joe Tyner, with whom I stayed long ago when traveling around Lake Michigan on BEHEMOTH, flew to the Bay Area from Minnesota in search of a suitable employer for his considerable networking talents, joining us for a lab dinner while collecting on some karmic hospitality debt. And Eric Blackburn, who left Canada on a solo voyage aboard the Chickadee (Spirit of the Kootenays), dropped in along with Mark Cenac, a Sausalito-based marine systems wizard. Eric is just beginning a grand adventure, linking schools around the world via his “Kids Care Project.”

A most interesting bunch of visitors!

Finally, one of the ongoing motivations that keeps these technomadic adventures moving is the allure of interesting new gizmology, as well as the melange of ideas about amusing ways to interconnect things that rarely appear together in the normal world of vertical markets.

One such project is the hydroponic garden, the computer-controlled mini-jungle that we’re planning for the forepeak (across the infamous bulkheads from the main cabin). The idea here is to instrument the enclosure microclimate and nutrient-pumping system, allowing the plant transpiration model designed by Peter Fynn to run in a FORTH node and issue precisely metered squirts whenever the plants are in need. This minimizes power wasted in excess pumping, while maximizing the efficiency of the plants. The biggest questions involve the availability of adequate light, the practicality of such a small “canopy” in meeting dietary needs beyond condiments, the impact on the meager weight budget, and the actual work involved in maintaining all this.

But as always, we’re pressing ahead on the strength of technopassion, and the data-collection front end just arrived — donated by Shiva Environmental Systems of Keene, NH. Basically, this is a three-channel analog front end that will be directly connected to A/D channels on the hydroponic control node. It includes sensors and corresponding amplifiers that yield a 0-5V output range for three essential measurements:

The entire unit is enclosed in a gasketed polycarbonate box about 6.7″ x 2.5″ x 2.2″, including the sensor head. It will be mounted on a pod somewhere amidst the plants, and should give us lots of interesting data with which to manipulate the parameters of the VTC (Vegetable Torture Chamber).

We will also need to monitor the level and pH of the nutrient solution, and are looking for compact and easily maintained instruments to do just that. Bob Ellingson of Halted recently donated a Corning laboratory-grade pH meter for use during system development, but we still need to find something tiny and reliable for the ship. Mark Moorcroft has been watching his nutrient pH, and reports wild fluctuations during plant growth spurts. This calls for active management of acid & base additives as well as occasional refresh of the nutrients themselves and attention to liquid level.

Hey, we need a hobby. Too much time on our hands…

Finally, in the potential new toy category, I gave a talk last week at the Pacificon ham radio convention in Concord, CA (without the bike — just a slide show), and that gave me the opportunity to catch up on new developments in ham gear. I’ll keep you posted on details as they emerge, but we may have some excellent new HF and dual-band equipment coming, as well as both standard and custom antennas…

And now, I can put it off no longer. Time to glass in those bulkheads and get the blasted things off the list!!!