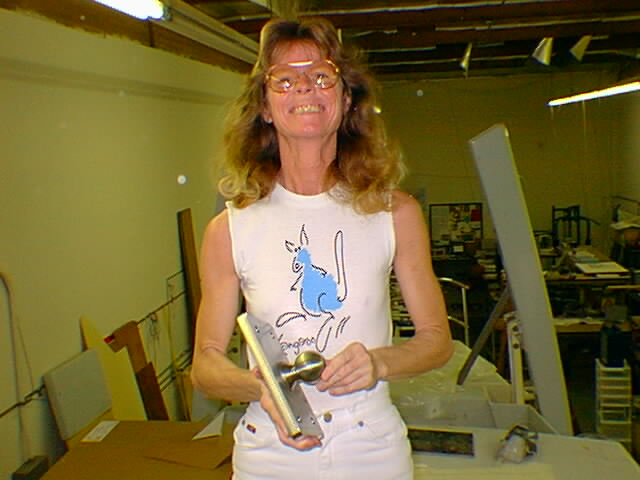 Arggggh! You called it a SINK! You have sealed your doom.

David Berkstresser, referring to my foolish error in Issue #117 in describing the place where I’ll wash the dishes. One must never refer to a “sink” in a boat. We have heat dissipators, not heat sinks; loads, not current sinks. And that stainless thing with a drain is a WASH BASIN.

Changes In The Air…

OK, it’s time. With due thanks to the freelance deadline-enforcement agents out there who have been nudging me with inquiries about our continued existence (“are you still alive?”), I am pleased to offer, after a 7-week hiatus, a Microship update. I have just returned from a 5-day visit to Jeffersontown, Kentucky, for my dad’s 84th birthday… and the break from Silicon Valley overload gave me the perspective to create this special issue.

But before I get into that: this has a been a strange time, with the distractions of relationship change slowing progress even as activity accelerated in other areas. I’ll spare you the personal details, but basically, the big news is that Faun is gone. This is an event rife with ironies which will doubtless appear amusing one day as I gaze back with the subjective editing of reminiscence; at the moment, it’s the blend of relief and agony one would expect to find at the end of an intense 2.7-year association. Our friendship continues, however, and Faun not only plans to maintain the Microship web site but also participate in the 10-person nanoship flotilla project. She’s cranking up her Decktop Publishing business, living on a rented monohull in a Redwood City marina, taking off for Antigua Race Week, and still working at West Marine although I’ve lost access to that lovely employee discount (parse that however you like)… the final days of the Epoch of Faun were marked by, among other things, a major shopping marathon.

I would be going quite mad were it not for a contemporaneous twist in my own life. The Internet contains the Answers to All Questions, as you know, and one Saturday in early February I was sipping latte and musing about the tattered remnants of romance, naturally concluding that a bit of research was in order. I found my way to one of the online crew-list web pages (San Diego), and immediately noted an intriguing ad from one Suzy O’Keefe:

Hm, sounds familiar… seen her pix in Latitude 38. I sent email, and within about 15 minutes there began a spirited correspondence that segued into telephone calls… JPEG attachments… hastily snail-mailed show ‘n tell packets… changes of plans… and a one-way plane ticket. 12 days and a half-megabyte of email later she was here!

I’ve had many a blind date in my time, and even a few blind affairs… but this is my first blind relationship.

In the 3 exploratory weeks since her arrival, Suzy has completed an actual-size cardboard mockup of the entire cabin interior including a very detailed galley model , participated in specifying the suite of Ronstan deck hardware, survived 4 days of grueling booth duty at the ACM97 conference where we exhibited BEHEMOTH, reorganized the office, caught up with NRL accounting, done heroic battle against Accumulated Lab Entropy, and begun arranging sailing adventures through her extensive database of nautical contacts including the other 150 men who responded to her ad. I think she’s motivated to get on the water!

About all this, Suzy writes, in part:

Who is this strange person who has come into Steve’s life and lab??? Someone as hooked on the adventures of life as is he. Someone who found sailing and couldn’t envision doing anything else. Someone whose passions drove the mechanism when all reason said it was crazy to continue, but here I am…

I bring to Microship my own addiction to ham radio (KE6ZNX), my knowledge of living aboard a cruising sailboat, my network of extended family cruising friends, my motivation, and a longing to share my sunsets. This is a labor of love for me in so many ways…I hope that my contributions are worthy of a project such as this.

Where to from here… who knows? Welcome, Suzy!

The Association of Computing Machinery held a remarkable event last week, a conference exploring the next 50 years of computing. I was initially skeptical of this theme when asked to exhibit, but “the future” wasn’t a superficial trade show motif at all; conference speakers were luminaries from across the whole spectrum of computing, and the exhibition was more a grown-up science fair than a rectilinear array of garishly competing booths. There were haptic input systems, 3D displays, new CAD tools, awesome graphics, and lots of things hastily cobbled into demos from deep within research labs… giving the whole affair an exploratory flavor enhanced by overall design representing an archeological dig with low lights, massive rocks, ancient computers, and organic layout. My compliments to ACM and the show organizers, as well as to those whose comments were collected in the book, Beyond Calculation. And I want to welcome the 162 new subscribers I met at the show!

First, we have 2 new sponsors to thank. Dantz has donated a copy of Retrospect Remote, a robust backup system for a network of Macintosh computers. We’ll be using this in the lab and onboard ship, and I further thank Vinnie Moscaritolo of Apple for making the connection.

I’m also delighted to welcome Marinco to our sponsor roster — they not only provided our 50-foot, 30-amp shore power cord and related fixtures but also three solar vents from the recently-acquired Nicro ventilation line. Great stuff indeed! Their web site is in development; I’ll give you a pointer when it’s online.

The mast step mentioned in #117 has been completed by Mon-Tek… a beautiful piece of stainless steel machining and welding, far too pretty to embed in the deck. But that’s what we’re going to do…

Mixed news from Apple: we now have more computers, I’m delighted to say, but we’ve also lost some of our lab funding as a result of restructuring. This is causing a mild panic, as you might imagine… stay tuned for updates. I’m still one of the hard-core Macintosh faithful, however, and just bought more Apple stock.

Finally, I was going to do a whole section about this, but maybe next time: I mounted the LP tank in the starboard lazarette and glassed in a foam-core compartment bulkhead. This is typical of the minor items on the massive TO-DO list that translate into dozens of hours of work… but it’s done.

OK, it has become very clear that we need a lot of help to roll this baby cruise-ready into the water, and more still to get her communicating and blinking merrily (and even meaningfully) inside that pressurized console. I’ve been pretty bad at “managing” the help that has been so kindly offered over the past years, though some projects have progressed well regardless. Upon reflection, I realized that the key is a project TEAM approach, rather than various volunteers whom I never think to call despite enticing offers of essential skills. The Newton team has been an excellent example of this effectiveness, as were some of the student teams at UCSD.

So here’s the deal. This is a formal, urgent call for participation in all aspects of the project, detailed below. About 50 of you responded to a general volunteer call last year, but many have not heard from me since. If you’re interested in helping create this technomadic machine, please reply with a pointer to the team(s) that interest you, and remind me if I already have an earlier letter from you on file.

What are the perks? Lots! Microship Development Team T-shirts and personalized mugs, of course, as well as food, espresso, and other essential beverages that go well with mugs. We still offer our “geek’s vacation” package, with free spartan room and board to anyone who wants to move in for a while and get a lot accomplished (as did Bill Vodall, Ken Glaeser, and Steve Prior). All volunteers will be on a rotation list for test-sail guest crew slots. Your name will be in lights via these postings, the web site, hardcopy publications, and the anticipated laser graphics display. You can play with cool toys and network with a lot of interesting people, pick up occasional lab hand-me-downs for free or cheap, participate in joint-venture spinoff projects as appropriate, and basically have a lot of fun while being creatively involved in an exciting project. And, of course, there will be a handsome certificate or other token of recognition when this is all over and we finally throw the Big Party.

Team membership is subject to selection based on skills, location, personal style, persuasiveness, our current needs, whim, and chance. Sex, race, age, and educational background are obviously not a factor; local folks are preferred in general, but some projects can work fine via the Net, so ask even if you are far away. Also, of course, if you’d like to help us but have more money than time… well, no problem… we gratefully accept donations as well! 😉

The remainder of this report is a list of the project teams that are either forming now or will crystallize from our current loose association of 30 or so volunteers. Space doesn’t permit much detail here… so if something catches your eye and you want to know more before committing to spend time, just ask! As groups get established, we’ll have meetings and establish a rhythm; there will also be a small listserv for each group to simplify communication…

I’m looking forward to working with you!