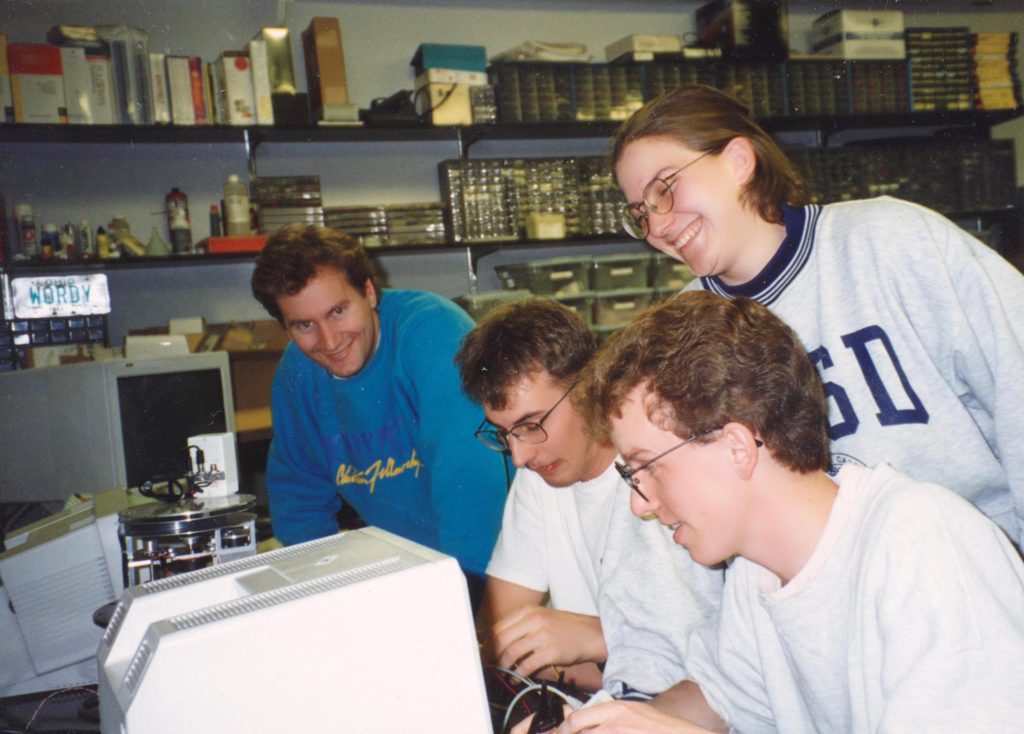 The once-philosophical nature of the Microship project, filled primarily with grand dreams of future boats, has been radically transformed by the presence of a 30-foot folding trimaran into something different… something of substance. Even the Fulmar epoch, exciting as it was, never felt REAL: staring at a kayak-scale boat while imagining years of open-ended wandering seemed more an adventure fantasy than a solid plan. This ship, on the other hand, looms in my vision as a TO-DO list of epic proportions, a future home, and a serious substrate for everything I’ve been writing about for three years.

In other words, the project is solidly underway.

The first step, long before installing a dozen FORTH nodes or tiling the tramps with a photovoltaic kilowatt, is to get the ship rigged and on the water. We need to experience conditions various, find out where bodies need to move and toes tend to stub, get a sense of performance and feel, learn the flavor of the ship under sail, reserve deck space for rigging before adding antennas and other gizmology, and so on. Even as we press ahead in the lab with renewed energy, our highest priorities are standing and running rigging, sails, deck layout, ground tackle, and increased trailer robustness. Only after we get the ship sailable will we press on with cabin layout, galley design, the electric outboard, and a lab full of control and communications systems.

Rigging is a complex issue, and is one of those areas where you can find roughly the same number of opinions as experts. Still, there are some out there who have extensive experience with multihull rig designs, and after nosing around a bit I have made contact with some key players. We’ll be meeting Gino Morrelli here next week, and yesterday we spent an hour or so at Corsair Marine… where we spoke with the guy who built my boat. If we can take advantage of standard F-boat rigging, there’s a good chance of picking up surplus hardware at Corsair.

In the meantime, our nautical education is accelerating. We went to Minney’s last week, a supermarket of used and surplus nautical gear in Newport Beach, and also had a delightful day sail in San Diego Bay with Lonnie Gamble on his Catalina 27. We spent a day kayaking with Len Wanger on Mission Bay, poking around marinas and paying particular attention to trimaran rigs. And my growing nautical bookshelf is yielding more and more relevant information as the questions become clearer.

Meanwhile, I’ve been working on control system packaging — now that I know the dimensions of the on-board lab where everything will be mounted, it’s easier to make decisions about node clustering and cabling. The first project was the Audio/Video subsystem, consisting of the audio crossbar, video crossbar, and 8 software-switched power channels for each.

Students in this quarter’s project team are working on the switch design and the interfaces with the Sony 8mm VCR and the D-7 DAT recorder, but to get them started I mounted a perfboard adjacent to the two FORTH nodes and added a Phoenix contact block for screw-terminal I/O. The most tedious task was the video junction module — 24 RCA jacks on an aluminum panel, wired with teflon-jacketed coax cable to a 96-pin Eurocard connector. Painful, but it’s done. This is mounted with the audio crossbar such that we have a single junction area for A/V signal routing: 32 audio sources 32 audio sinks 16 video sources 8 video sinks with up to 8 live connections available at any given time for each medium.

My only regret in this is that the audio and video crossbars were developed as separate student projects last year and thus occupy two of the New Micros FORTH boards. This is a bit redundant — one could easily handle both, and I’m tempted to move audio control to the video board (which already contains 4 Mitel 88V32s) and merge the software packages. Since these processors have little to do other than control the crosspoint matrices, switch 16 power-control bits, run watchdog and status tasks, and periodically report to the Hub, this might be a good hardware-minimization step.

While we’re on the subject of video, I should mention the rest of the system. Nathan and Alex have been back a couple of times to help close up the turret project (the penalty for doing such good work as they did is that I insist on it being finished, instead of just writing off an ill-defined collection of hardware and unstable code as someone’s educational experience). We’re almost there — with the exception of one mysterious bug that shorts the Power Trends regulator when camera B is commanded on, it works. They deftly left the ship-referenced angle calculations to me, so full 2-camera implementation will involve some clever HyperTalk, but the speed, pointing, and scanning operations are all fully debugged. We also did the internal and external cabling via waterproof connector to allow the turret to be physically closed, and one more evening should allow reasonably permanent packaging.

At the moment, the turret carries two cameras — the .05 lux black & white unit from GBC, and the micro color unit from Sharp. The latter is not at all fond of direct sunlight, so it’s only there for our initial testing whereupon it will move to the cabin or lab — I’m looking for a color turret camera that has remote zoom control and wider latitude, yet still fits.

The most immediate application for this is a demo we need to have working by mid-May, affecting our possible involvement in a new wireless research lab and concomitant lab space. The goal is to allow a Web client on a Mac PowerBook to connect to our MacHTTP server via wireless AppleTalk, command the turret to any angle by clicking on an image map, then automatically receive a picture of the lab when the camera has been pointed in the specified direction. Lots of pieces are in place — Faun has been working steadily on the HTML and AppleScript components, and we’ve had first-class help from Roy Lovejoy of Adept Solutions who wrote a scriptable frame-grabbing and serial-interface app for us.

The solar design has changed — and stabilized, thanks to the actual dimensions available from the ship. We’ll use 1,080 watts of Solarex modules — 36 of the 30-watt ultralight units packaged in groups of 6, each of which is a tri-fold unit we call a “triplet.” Three of these 180-watt units will mount on each of the polypropylene mesh tramps, held down by “velcro” straps. (Thanks to Rip ‘n Grip for about 80 feet of 1.5″ sew-on hook and loop material!) The modules themselves will be bonded to approximately 2×4-foot panels of 1″ Divinycell, vacuum-bagged with a fiberglass skin and hinged like a spiral notebook with their neighbors. The mechanical engineering project team, Stephanie Griffin and Adrian Cordova, is working on the specification and design of this lightweight, folding system.

There have been a few changes since my last comments on the power system. While this is not yet fully defined, it appears that we’ll be running the main battery bank at 48 volts, with the potentially fatal 120-volt open-circuit array voltage defined by SERIES connection of the six 30-watt modules in each triplet. These six high-voltage lines will each have a dedicated peak-power tracker, which optimizes the I-V curve of each cluster to maximize extracted wattage as shading, temperature, and solar incidence angles vary.

The high-voltage battery array is optimized for low-loss propulsion using a Ray electric outboard, but that still leaves us with the need for a stable 12-volt system for everything else. The most reliable way to handle this is with a separate Group 27 battery charged by a dedicated DC-to-DC converter from the HV system, with reconfigurability of the entire array possible from the solar panel connections at the hull, on into the battery junction panel itself. This would give us something like 80 amps of 12 volts if everything were reconnected in parallel.

The only down side of all this is that batteries are HEAVY, and we could be looking at eight 6-volt batteries totaling some 400 pounds. The good news is that we are going to do without a fuel-burning engine entirely, so there are corresponding savings in that department. The addition of a flexible generator for wind charging in any mode (air or water driven) should complete an effective propulsion system, roughly equivalent to a 10 horsepower outboard with unlimited free fuel and enough stored energy for many hours of medium-power cruising — as well as nearly 200 pounds of thrust when needed.

Finally, since I need to get ready to leave tomorrow for a speaking gig in San Francisco (with BEHEMOTH), I want to close with a few quickie updates.

Paul Picot (our friend in Canada who visited recently and helped rescue the Microship from L.A.) is now working on the pressure-control system — a non-trivial and absolutely essential component. Based on early work by Gerken, Scheer, and Whitney, he has mapped out the suite of components necessary, scaled the space and power requirements, and identified the reliability trade-offs of various approaches. Much more on this as it develops…

Dan Yang is starting the design of a catamaran system for the kayaks, allowing us to link them together for more flexible dinghy applications and potential sailing ability. This will involve deck fixtures molded to the boats, and carbon-fiber crossbeams with a net strung between them (the tramps for the ship are over $1,000 — hopefully we can find some scrap material for this!). The kayak fixtures will also be used to lock them securely to their cradles on the amas.

Finally, monographs 402 and 403 are finished and ready to ship — $5 each gets you hardcopy of the first year of these reports, along with additional commentary and many photos. Each publication, lovingly laid out in PageMaker by Faun, is about 43 pages…

Cheers from the Microship lab!