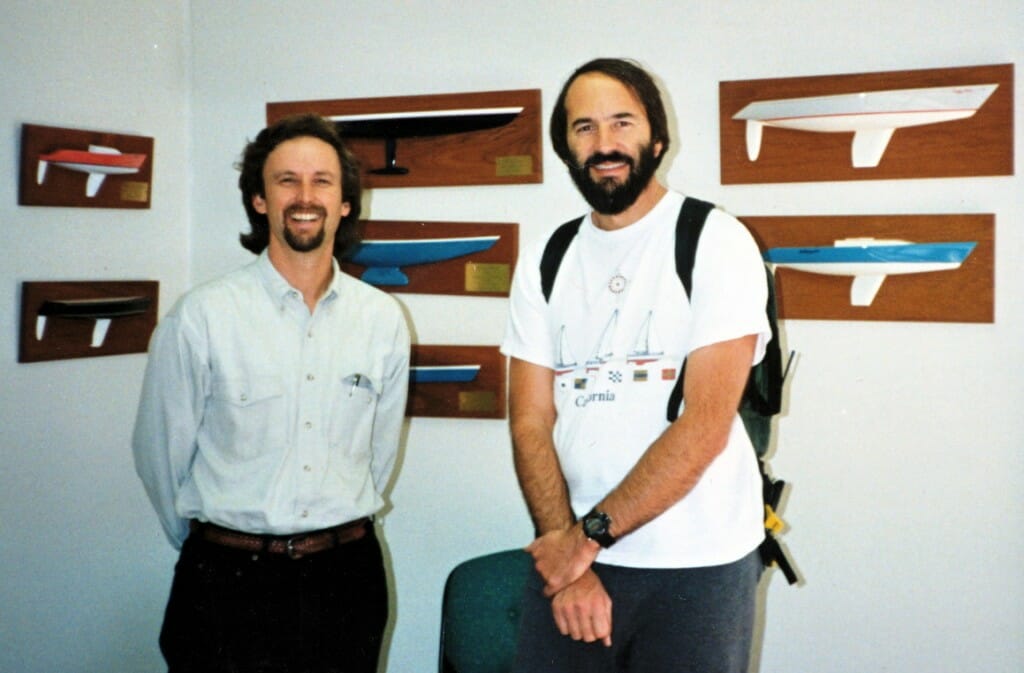 This article appeared near the beginning of the Microship project, a few months after setting up the initial lab at UCSD. I had my first few students, working on the project for credit, and was at the time convinced that we would build a custom center hull with deployable double kayaks as outriggers. That concept was doomed, but we were making good headway on the multidrop network of multitasking FORTH nodes. An earlier piece in this same publication covered the Nomadness journal that I published for a while. The photo above is from this approximate time, and shows me with Robb Walker (on left) at Nelson Marek Yacht Design.

Roberts, who gained fame by pedaling a bicycle across America loaded with a Radio Shack Model 100, and later expanded his efforts into a 350-pound, electronics-loaded recumbent bike called Behemoth, is now aiming to take mobile computing to the inland water ways of America.

But that will demand more of his electronics and that delicate balance among weight, power, and reliability that all mobile computing users must deal with everyday. The current “visiting scholar” at UC San Diego begins with an appropriate quotation from an anonymous sailor. “You know how to simulate sailing? Stand in a cold shower and tear up $100 bills.”

Taking advantage of more than 40 volunteers from the university, Roberts has remodeled the Microship from a kayak into a kayacht — “a 30-foot center hull 4 feet wide at the waterline, 18- foot overall beam, and 1.5-ton estimated weight.”

Retained are outriggers which are “detachable pedal- and paddle-powered double kayaks based on Current Designs Libra hulls.” “The center hull is being designed by Nelson/Marek, the San Diego yacht design firm that created the Stars & Stripes catamaran as well as a number of custom yachts and racers,” he writes. “It’s not fully defined yet, but we’re dealing with a number of odd concepts that may make this the Behemoth of multihulls.”

Behemoth turned into a powerful electronic machine which was very hard to pedal up-hill. But change could come quickly.

“None of this exists yet, but we’ve been working on design concepts, gathering composite materials information, working on frame stress analysis, and learning boatbuilding techniques. No doubt there are surprises in store, but that’s part of the appeal… think how boring it would be to just go out and buy a yacht!” he said.

“Incidentally, as we study multihull design, an interesting parallel is becoming apparent: multihulls are to monohulls as recumbent bicycles are to diamond frames. They’re faster, more interesting, annoying to old-timers, and cover a wide quality range from exquisite to garbage.

They both attract wizards and nutcases, leading to odd alliances against old methods; they’ve both been banned from traditional sanctioned races after blowing everyone else off the course. And they are both so undefined that designs have not converged upon a few established standards, but instead show up in ever more radical configurations as designers are drawn inevitably to the challenge of pushing the envelope. In short, both are where the action is,” he added.

But what about the electronics? Roberts is planning to link a dozen or so FORTH 68HC11 processors using a multidrop networking system into a network hosted by a single circuit board as a hub. “This whole network requires so little power that it can stay on most of the time, and the hub’s low-level user interface is a simple 2-line LCD and keypad,” he writes.

“Atop that, however, will be a very robust PC,” based on an Intel chip and Ampro’s PC/104 design. “The net effect here is a single integrated environment for all shipboard electronics, data collection, power control, navigation, charting, software development, control network graphic user interface, and so on, he said.”

On the same Ethernet will be a pair of Macintoshes and a PowerBook Roberts can walk away with, “linked via RF AppleTalk from Digital Ocean. This will be the work environment for writing, email, video production, database, and all those things that I use my PowerBook for right now.” The Mac and PC will share a single waterproof keyboard and pointing device.

“Of course, the Internet connection is critical, and we have put a Tadpole SPARCbook on the Net here at UCSD with the intent of using it as a central file server on the Microship and repository for all the UNIX networking tools.” Roberts adds. Some of the Behemoth technology, like the audio crossbar assembly, will also be used.

If you want to help Roberts on his way, he’s still taking equipment donations, and money to buy equipment. But he’s also taking cash contributions to defray out-of-pocket expenses. A plaque or other display on the finished Microship will commemorate your donation, and you’ll get a special T-shirt, still being designed.