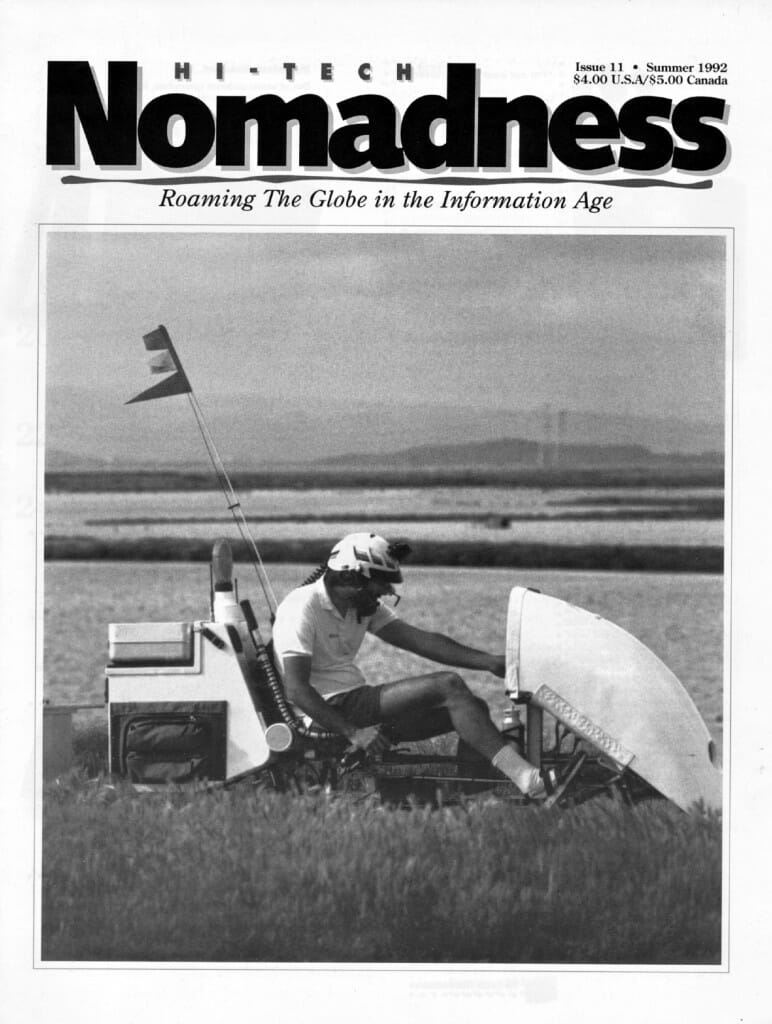 This piece reminds me of one of my Great Regrets… ceasing publication of the Nomadness print publication just as it was taking off. The bicycle adventure itself had bogged down; after 16,000 miles on previous versions, the monstrously heavy BEHEMOTH started to feel like just too much work to pedal… and the rhythms of the road way too familiar. I did 1,000 miles on the new bike, and then took it on a speaking tour that lasted nearly 2 years.

After a startlingly intense kayaking epiphany in the Adirondacks, my life became defined by a deliciously mad fantasy of aquatic adventure… a full-scale technomadic overlay onto a tiny nautical substrate, elegant and swift.  Kayaks filled my head, and before long I had acquired my own boat — complete with an overhead stowage nest across from BEHEMOTH in the Mothership, the 20-foot mobile lab and diesel truck in which I plied the Interstates while schlepping my geeky toys into hamfests, trade shows, user group meetings, and corporate brown-bag luncheons. The more I talked about the bike, the more I thought about the boat… and the less about the Journal.

The subsequent boatbuilding decade is all described here, but meanwhile, I had a new partner in the publishing business and a sense of deadlines zipping by. With Tower Books carrying the magazine and growing interest in the field, I wimped out, much to his disappointment. The issue shown above was beautifully produced; I cranked out one more, just a simple newsletter with primitive layout, then only published stories online thereafter. If you’d like a few copies, I have some sets of four back issues (7-10) in my eBay store. I wish I had continued… this was way ahead of the curve in nomadic connectivity.

Imagine yourself riding a bicycle down a road in the Colorado Rockies using a helmet-mounted mouse to control a Macintosh computer. You write about your experience and then transmit the article through a satellite to your home office, where it is included in a quarterly newsletter. This is the story of Steve Roberts.

From the luxury of his own bicycle, from anywhere in the United States, he writes stories for his newsletter and sends them via e-mail to a partner in Cupertino, who lays out and prints the publication. Roberts, 40, likes to call himself a High-Tech Nomad, and titles his newsletter Hi-Tech Nomadness, Roaming the Globe in the Information Age.

The $15-a-year newsletter, which was launched three years ago, has a circulation of 2500. It includes black-and-white photographs, personal tales from Roberts, “How-to” articles, answers to the 20 most-asked questions about Roberts and his bicycle, articles from freelance writers, and reports on his own research. Issues are usually 24 to 28 pages long.

“I write about the technologies that make this possible,” Roberts says, “living this full-time nomadic lifestyle.”

Doug Brightwell, his partner, writes in their newsletter, “We think [Hi-Tech Nomadnes] should provide a window on an emerging new world, documenting how information-age technologies are giving people more options regarding where they live, work, and play.” In addition to being co-editor of the newsletter, Brightwell is a full-time video producer at Sun Microsystems in Palo Alto.

Roberts’ bicycle is a far cry from what you might find in a typical bicycle shop. It is eight feet long, weighs a quarter-of-a-ton, and is worth about $1 million. He calls it the “Behemoth” (Big Electronic Human-Energized Machine…Only Too Heavy).

The Behemoth is equipped with a Qualcomm satellite dish and receiver, Macintosh portable computer with two megabytes of RAM and a 40-megabyte hard disk, a PowerBook 170 8/80, a Sun SPARCstation UNIX computer with a 414-megabyte hard drive, a 9600 baud cellular modem, a CB radio, personal necessities, and more.

A “Private Eye,” manufactured by Reflection Technology, projects an image of a full-size computer screen that Roberts can view with his right eye when he looks down. His helmet features ultrasonic transducers that turn it into a “head mouse.” As he moves his head in different directions, the cursor moves accordingly on the Mac screen.

“Just imagine wandering around full-time on a high-tech million dollar machine,” Roberts says. “It’s opened a lot of doors for me. It’s been a gateway to all kinds of intriguing social encounters. People should pursue their passions. We finally have the tools with the advent of the laptop, cellular modems and networks.”

Roberts has traveled all over the country; but he doesn’t like to pin down any of his favorite areas. “I never found a single favorite area, but I love the mountains of Colorado and the beaches of Southern California.” he says.

A self-described “Yuppie Hobo,” Roberts began his cross-country trip in 1983. He was writing books, consulting on microprocessors, and living in suburbia. “I found myself in a position of doing things I didn’t enjoy,” he says. “I wanted to construct a lifestyle based on my passions, which are travel and adventure, networking, computers, romance, tinkering with electronics, bicycles, and boats. The obvious solution was to trash my lifestyle, move to a computerized bicycle, and live in a computer network while traveling full-time.”

Roberts writes his stories on his bike, at someone’s house, or at a location off the side of the road. “He could generate a story while he’s riding down the road if he wants to,” Brightwell says. Once the stories are transmitted to him, Brightwell uses PageMaker on a Macintosh II to produce the newsletter. Photos are scanned in on a flatbed scanner.

Now, after many miles on the bicycle, Roberts is ready to take to the sea. He is in the process of building an amphibious sea kayak called the “Microship” to take off in the Spring of 1994. “I’m tired of the asphalt,” he says, “One must evolve.” Until he embarks, he keeps busy with various speaking engagements across the country.

To subscribe to Roberts’ newsletter or for information about his books, write to NRL (contact info redacted).