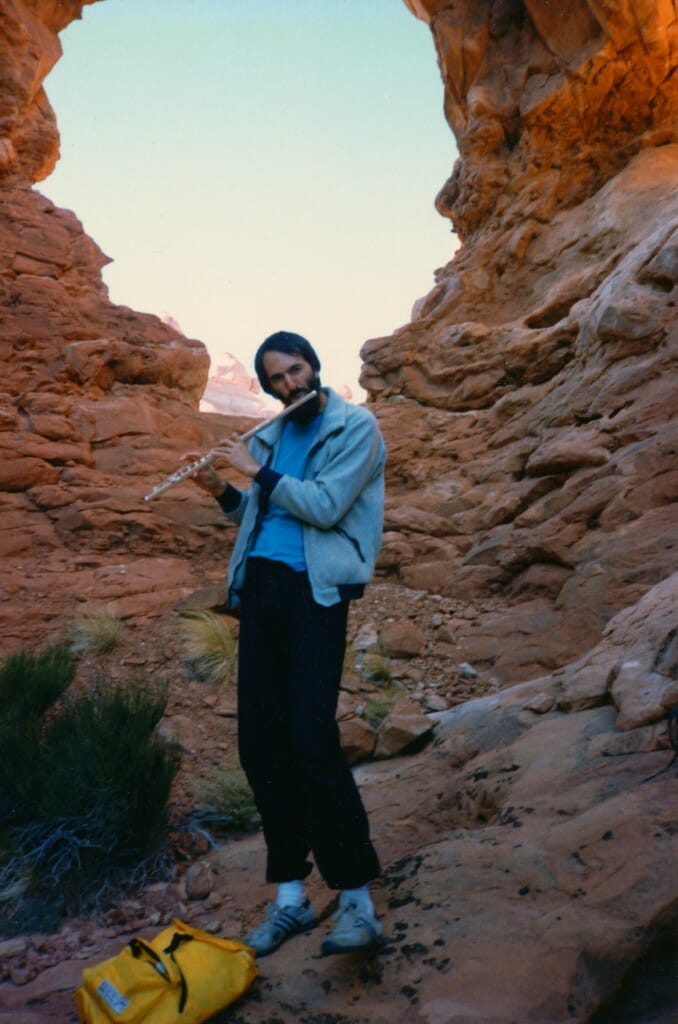 You have to be the reader’s mushroom.

Arches National Park is a playground of the eye, a geologic absurdity, an impossibly eccentric piece of eastern Utah.  It’s a place for the toppling of old notions, a place that inspires the erosion of rigid thinking.  Clamber around Arches, and soon the wind will whistle through new openings in your mind and turn all your office buildings into castles.

I stood, electric, at the focus of a great inward-curving wall of red stone, an acoustical wonder that gathered the vibrations of my every whisper and flung them back like a sibilant shout.

Reaching over my shoulder as an archer to his quiver, I extracted the flute from my pack.  Silently, stealthily, I raised it to my lips; quickly, precisely, I let fly a single G-sharp.  It flashed briefly in the sun, struck the rock, and shattered — returning a fusillade of flying fragments that filled the air and stung my flesh.  They skittered across the ground, whispered through the sage, spooked the darting whiptails, and bounced along a boulder-strewn draw to rest at last in the myriad crevices of alien vegetation.

One note!  That wasn’t an arrow, it was a musical bazooka.

I launched another.  Then another.  Then I fired off a barrage from C to shining C and tried to dive for cover — but I was too slow, much too slow.  My body was riddled with crystalline shrapnel, one musical sliver per goosebump.  Ooohhh…

I began playing, standing in the lee of a two-story boulder sandy red in the sun, the flute alive with its own silver energy.  Judith sat quietly some distance off, her eyes closed, her tan body and that of the rock curved together like lovers spooning.

Every note yielded a rippling cascade of echoes, and it took but a moment to discover that I was no longer a soloist but the leader of an infinitely responsive ensemble.  I could play chords with myself, set up tinkling arpeggios that seemed to wet the parched rock like a misty waterfall, or loose a lush chorus upon the sky.  By moving about, I could change the texture — from a single soft strand to a complex fabric, interwoven with threads of all colors and dimensions.

My vision soared; the shackles fell.  I played with a smooth complexity unmatched before or since, toying with echoes, flirting with wind, seeking and quickly finding that precise balance between too much and too little attention.  I became a focused listener, absorbed in the sound without fully realizing that I was the one making it, guiding it gently with humor and expectation.  Everything in music must be at once surprising and expected, and I was stunned to observe that something pouring from my own spirit could indeed be both.

Yeah… my spirit.  Not my intellect.  That was the key!  I was listening, not playing — the flutist was someone else:  a musician reacting to my fantasies, a psychic puppet, a built-in minstrel subject to my every whim.  I was aware of Judith’s soft presence, but knew not the self-consciousness of “performance.”

The subtlety grew; the sound became an impressionistic image of the land around me — a synesthesia made tangible.  It had no idiom, no key, no tonic.  Little tensions appeared and then resolved themselves like micro-sonatas, but the music was less that than a documentation of magic, a moment-to-moment realization of the possibilities contained in consciousness.

This was not composition… it was breath.

Suddenly there was a disturbance in the periphery of my vision.  I faltered for a moment like a distracted acrobat, the high-wire vibrating under me as unthinking grace was invaded by control.  I scanned the land and saw a deer, tawny and curious, gazing at me with gentle brown eyes.  Relaxed again, I played softly, watching my watcher, touching her with sound that was more an audible stroking than a “come-hither.”  She picked her way carefully through the sage and the rocks, never dropping her gaze, circling, wary but fascinated, instinct fighting instinct in a confusion of ancient urges.

I twittered an acknowledgment, the musical equivalent of fingernails lightly brushing her spine.

The deer did a little scamper.

I turned slightly to shower my lady with silver darts.  She ducked and the deer giggled; I took a little step and soared out over the valley… weightless… unfettered inside and out… whistling through openings in rock and mind — like the wind, like the sound, like the growing wonder of my life.

“Now all I have to do is remember this,” I thought, lifting Judith’s hair with a wingtip and releasing it to flow down her bare back.  I poured myself into her kiss, and the music turned liquid, sensual, musky — little curled notes tickling my nose while the delicious melody danced to the flutter of my embouchure.

Perhaps it was a sob, perhaps a laugh, perhaps an endless hungry cry of the ecstasy that should never, never stop.  Her smile was inviting and vertical.

My flute flashed bright in the sun and then slowly disappeared.