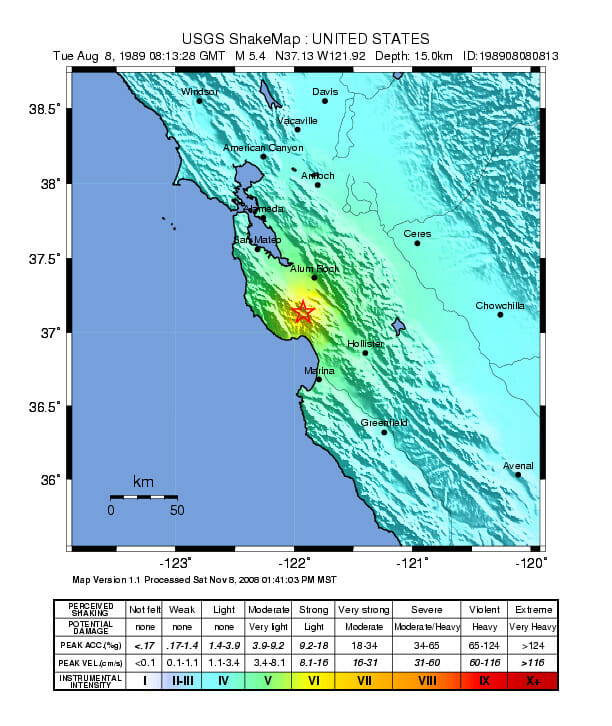 This little snippet from my Miles with Maggie series (#52) took place two months before the 1989 Loma Prieta earthquake that shattered our newfound Santa Cruz complacency. The foreshock impressionistically recorded here was but a teaser… yet deeply intimate somehow, coming as it did on the edge of sleep. The impact on the psyche was intense, and came to symbolize the realization that the things we habitually trust… family, peace, the “ground reference” of earth itself… are transitory. The tale below is a chapter in the High-Tech Nomad book, and took place during the BEHEMOTH development epoch.

I had been writing until 1 A.M., crystallizing dreams and worries into one of those passionate maundering documents too personal to publish, pumping space music into my head and thinking of night. Tired. I crept to the bedroom, found fragrant Maggie, curled against her. Automatically, with reflexes born of 1,328 consecutive bedtimes, she turned on her side as I slipped my left arm under her neck and draped my right across her, hands tangling just so. Ah, warm flesh, so familiar: I kissed her shoulder and she wiggled a bit, everything correctly in place. Just like every night, her hair tickled my nose and we executed a perfectly choreographed series of moves to tuck it under her head.

Lying there in the familiar nest I unconsciously invoked the nightly summary/backup task, the day’s events gliding by, loose ends noted, delights relived, problems put in context. Maggie’s breath rasped softly. I began to catch myself slipping; a foot twitching far away… the inhabitants of night country awakening to romp in my head… lingering awareness of skin and hair.

The windows began rumbling. First flickering thought: the housemates are making love two rooms away at a critical node in the framing structure, imparting a resonant response that manifests itself in our room. My hypnagogic brain sketched a glowing fluorescent engineering textbook illustration captioned “every couple has its moment,” briefly rendered a flawed analogy to dipole antenna theory, and probed the soundspace for corroborating moans. There were none… and the rumbling grew more intense.

I turned my head to open both ears, increasing receptor gain while adding sonic location capability. In the cloud-diffused moonlight, I could see movement: a bolus of adrenaline shot into my bloodstream and I sat up wide-eyed.

The whole room was rocking, a cacophony of rattling objects from throughout the house adding a shrill edge of panic to an already unsettling loss of stability. Christy screamed from the TV room, and something rolled off the desk. But the movement! The floor, which I usually consider to be a solid and reliable outgrowth of an equally dependable earth, was moving to and fro, rolling and bucking like a flat, tame version of those hydraulic broncos catering to pre-lawsuit urban cowboys in the singles bars of yesteryear. I wasn’t about to try standing up on the thing‚ I just sat, empty of analysis, gripping the bedding as Maggie followed suit and leapt abruptly from the safety of sleep.

The earthquake lasted about ten seconds. It was a 5.2, they later concluded, centered on the San Andreas fault in the Santa Cruz mountains up near the Lupin Naturist Camp past Lexington Reservoir. Energizing, exciting, terrifying… the movement of earth is one of those graphic demonstrations that things aren’t always as solid as they seem‚ that life ends, continents move, stars collapse, businesses die, disks crash, revolutions fail. In the middle of an earthquake, all your assumptions fall away like pretensions on a nude beach, and you are bare human, surviving at the mercy of chance and the elements. Tomorrow is not guaranteed. Your house might fall down or blow away. Someday all this will change as much as it already has, and your legacy will be as vaporous as your last campfire… beautiful and poetic in life, a subtle charring of rock a year later.

Good stuff, earthquakes. When it passed, we gathered around the stereo and listened to AM for the first time in a year, nodding and commenting on the diverse tales of talk-show callers from Monterey to Sonoma. The whole Bay Area was wide awake, reminded of life’s precious fragility, frightened at this tiny hint of what the Big One will be like, drawn together in a rare moment of common interest. I realized again that what the world needs most is a visit from a few aliens or a cosmic disturbance of some sort… there’s a refreshing feeling in “pulling together” that recalls that dimly remembered, oversimplified, fictional past of small-town unity and childlike simplicity.

There were two smaller aftershocks, and the papers are full of nervous speculation about the odds of a 6.0 hitting us in the next few days. Apparently the ocean floor out here moves north about .2 inch per year, and the strain has been building up for nearly a century. Something will give eventually, everything will fall down, and it’s going to be one hell of a show.

Conclusion: Go on working for tomorrow, but don’t forget to live for today.