I have mixed feelings about this, but there’s really no choice. The old marine “networking” standard (NMEA 0183) was little more than glorified 4800 baud serial datacomm, with various vendors producing their own variants to jockey for competitive advantage. That’s not very interoperable.

NMEA 2000, the new stuff, is based on the well-established industrial CAN (Controller Area Network), and is technically far superior to the vintage 0183 protocol. There can be lots of talkers, it’s faster, it’s electrically robust, it carries power to all but the thirstiest loads, and it can even be hot-plugged. All the latest marine equipment is designed to work with this, though some vendors still insist on forcing people to buy their own connectors and cables (going so far as to give their flavor of the standard a distinctive name to discourage shopping around). This is annoying, but easy to fix once you know the game.

What is more frustrating is that it is not really an open standard (as are the various layers that make up the Internet), so the cost of entry is high and there are substantial legal disincentives to hack, reverse engineer, productize, or even publish without paying to be in the club. This discourages hobbyists, and even those who do come up with something clever at the network level are prevented from going public. For an old geek like me, this seems self-serving in a very destructive sense, but there’s enough momentum in the industry that it will stick anyway. Besides, as I said, it really is good stuff, and there is much to be said for standardization and interoperability without a long shake-out period (remember S-100?)

So with all that out of the way, and recognizing the handwriting on the wall, it is time to move forward with the ship systems. One of my best educational resources for N2K and marine electronics in general has been Panbo.

I’m basically thinking of this in two major zones. The first is off-the-shelf NMEA 2000 equipment (hereinafter called N2K) that is interconnected by a Maretron backbone, and available to the server via a USB interface. Scattered around the ship are sensors, instrument displays, chartplotters, an autopilot, engine interface, and even a two-layer gateway that lets the ancient B&G; network sensors get translated to NMEA 0183 and thence to N2K. The Simrad autopilot uses “Simnet,” which is really N2K, so interfacing that is just a matter of wire cutters and field-attachable connectors.

The second zone is my own stuff… also hanging off USB, but taking the form of direct I/O and other interfaces to incorporate system configuration tools, power management, security, and a variety of environmental sensors. The server (probably a Mac Mini, since I gave up on Damn Small Linux… though maybe an embedded ITX or Asus if power considerations overcome the hassles of KVM switching) will then turn all this into a database-backed website, accessible on or off the boat.

But that fancy tinkering is for later. The immediate project, now underway, is getting the essential navigation tools all playing nice on the network: two Furuno NavNet 3D multifunction displays, the wind/speed/depth sensors, GPS and compass, autopilot and its wireless remote, rudder angle sensor, instrument displays, engine and fuel consumption data, tank levels, and so on. Here’s how it all fits together (revised Jun 19, 2008): 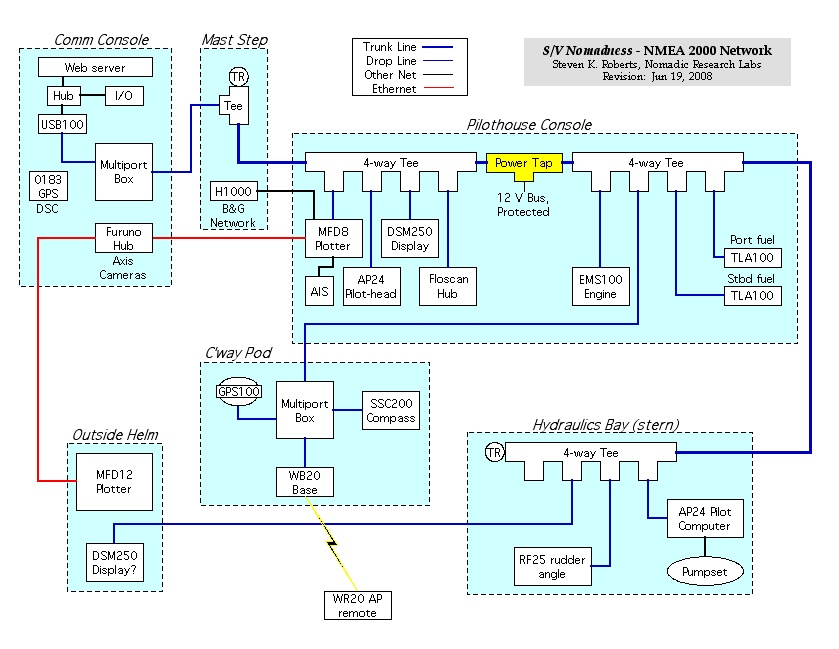 The blue sections are physical regions of the boat, and they are linked by the N2K network. Because there are alternatives to the simple “tee” in the form of 4-port tees and multiport boxes at the end of drop cables, I have tried to minimize the cabling (and cost) by grouping things as efficiently as possible. And the terminating resistor at the mast step, which seems like a strange place to end the backbone since the Comm Console is not so far away, is to set myself up for the future transition from legacy masthead instruments to their N2K counterparts… with the network termination moving 60 feet up in the sky.

The bulk of the activity is behind the nav and power consoles in the pilothouse, where all the lower helm controls, engine and tank monitoring, and circuit breakers are located. This is also the location of the autopilot control box, which communicates over the network with the pilot itself back in the hydraulics bay. Further down the line, at the binnacle (the outside helm), there is a base station for a wireless autopilot control… putting the Bluetooth RF link entirely outside the steel hull. This is the sort of thing that highlights the value of the N2K network – not only does it let sensors talk to instruments, but it eliminates (in many cases) the need to run a bunch of parallel cables. The exception is the red line… ethernet between the Furuno multifunction displays that also handle IP video, chart downloads, and other bandwidth-intensive stuff (note that only one of the Furuno rigs can be connected to the N2K backbone; the high-speed network between them carries the data and also supports power synchronization).

(Incidentally, the ethernet LAN will probably be slightly confusing at some point, as one of those plotters wants to play DHCP server. I already have DHCP in the form of the boat’s wireless router with upstream EVDO, so I guess those will end up on separate IP spaces. Not sure how all that will shake out when/if I want to start playing with more interesting applications at the Mac end.)

Anyway, current status on the hardware side of all this is that the network wiring is on board and I’m starting to run cable. The boxes themselves are piling up, awaiting installation.

In other news, the 10′ Navigator dinghy is now lightly dangling from the stern davits, and I’m awaiting the stainless ratchet straps that will let it be attached snugly enough to withstand a bit of bouncing (just a bit; offshore it will be lashed on the foredeck). I only mention this to give a well-deserved plug to the Hitchcraft RopeTie – one of those “why didn’t I think of that?” gadgets that is now always in my rigging kit. These come in two sizes, and let you create a stable tie under tension (like a trucker’s hitch, but much easier). Here’s one of mine, temporarily holding up the stern of the dinghy until I manage to get horn cleats screwed to the underside of the radar arch: 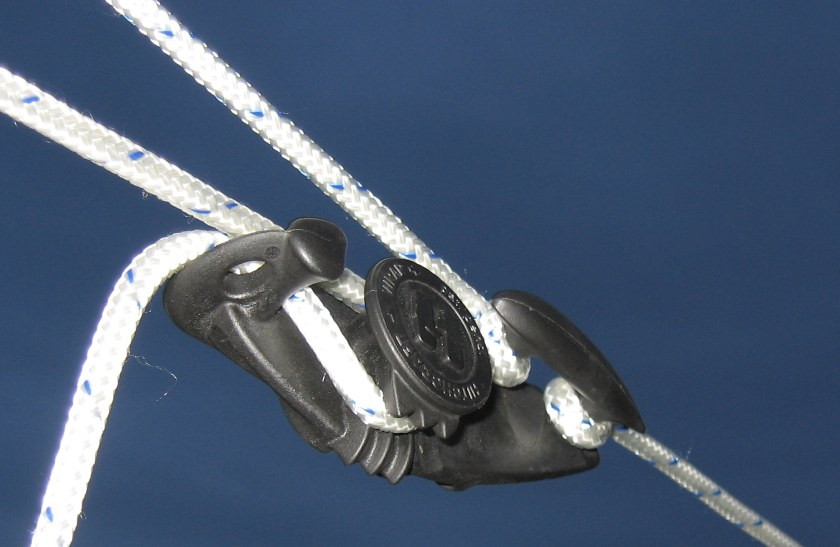 There’s a lifting bridle at each bulkhead of the dink, hanging from the davits… I fabricated these with Nicopress terminals and jacketed stainless cable, as well as Ronstan blocks and carabiners: 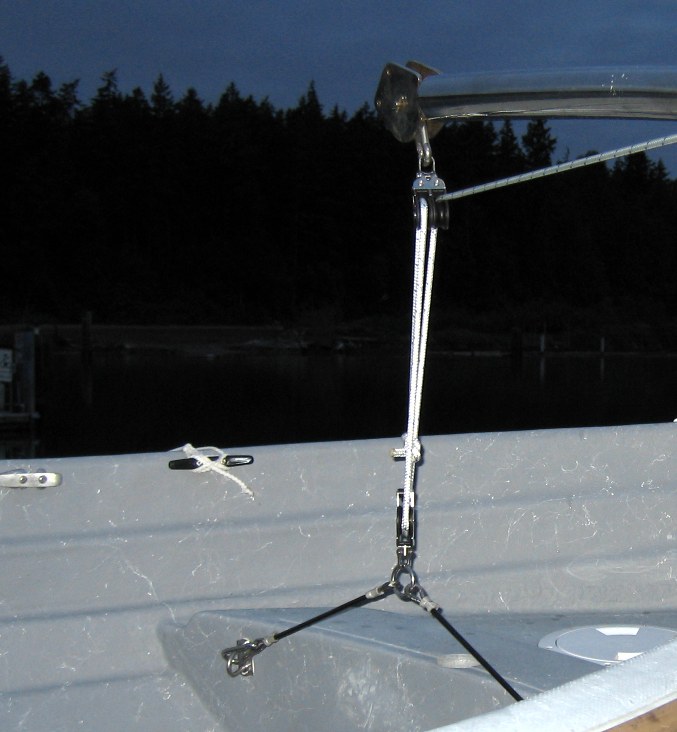 So, there is tangible progress on a couple of fronts… and the plumbing hardware is now on order. Sky’s kayak (Skyak, of course) arrived today, and there seems to be hope for sunshine sometime soon. Time on water? Could it be true?