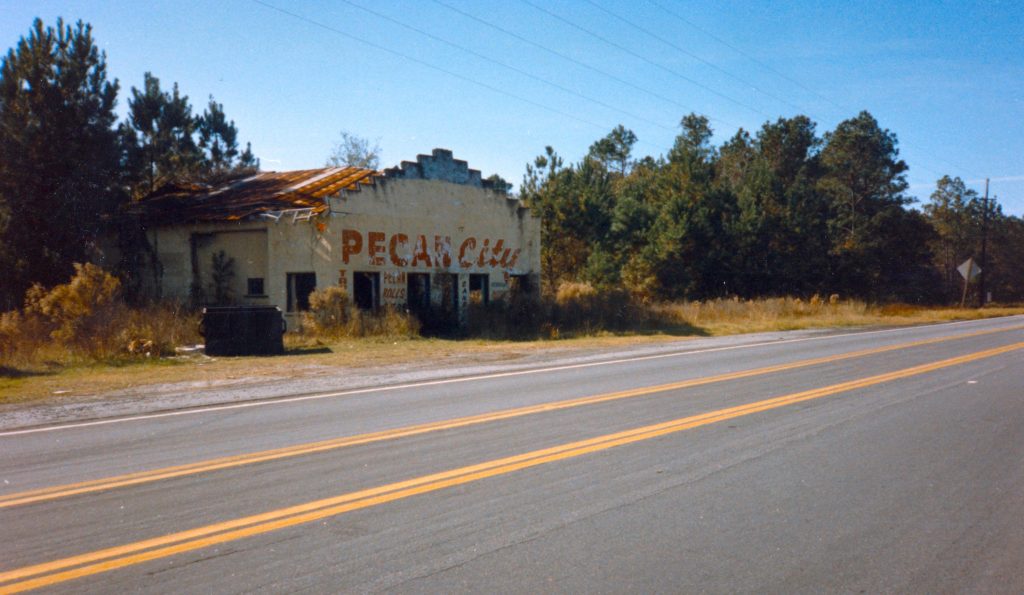 The fickleness of the women I love is only equalled by the infernal constancy of the women who love me.
–— George Bernard Shaw

The first one came at Shepherd College, a small place situated about as far east as you can get on the hitchhiking thumb of West Virginia. Fresh from towpath solitude I showered and went for a stroll, parking myself at last in the student union to gaze in lustful appreciation at the young women. They had all dressed for the evening in alluring innocence, and carefully avoided my hungry eye.

Another campus, another dining hall. This time, it was Mary Washington College in Fredericksburg, Virginia — originally an all-girls’ school, now coed. The women outnumber the men by a four-to-one margin, but the guys still complain bitterly about their fading status as hot property. I wandered around in awe, at last meeting a pretty girl in a Corvette who took me to a party… at her boyfriend’s house.

In Richmond, where Tina/Dave struts in glittering compudrag, I stayed in lavish southern hospitality with Jim Frye and his family. During a consulting job a year before, he had mentioned a potential liaison between his daughter and me. I arrived, sodden from an all-day rain ride, eager to meet the famed offspring of this tobacco-industry lobbyist. She was beautiful, graceful, and as elegant as southern architecture. Ann-Harper took my hand with a faint 1980’s remnant of the curtsy and, in a voice wafting like a whiff of magnolia from the pages of Gone with the Wind, introduced her fiancee.

I arrived at the historic College of William and Mary as the Sony filled my head with the flagrantly teasing song “I’m a Nasty Girl.” My student hosts took me to a party where three activities divided the crowd: playing “quarters” in the kitchen (see how drunk you can get), dancing in the living room (see how sweaty you can get), and flirting everywhere (see how laid you can get). Pleasantly outnumbered again, I floated through a fragrant sea of blonde hair and got slightly drunk, very sweaty, and not at all laid.

The pangs continued, and became more intense, more frequent. I felt a pattern emerging: the chronic loneliness of just passing through. The shapely legs of the East remained closed to my investigations, for I was an on-the-road unknown with a bicycle for a home — at best an eccentric traveler, a friendly curiosity. Just passing through. One-night stands are as rare as big bands in this disease-ravaged land of ours, and people rolling around the country with sleeping bags are too hard to pin down.

Yes, the loneliness was creeping into me, but I did find satisfaction in the miles. Red lines inched through my atlas, threading memories into pages, stitching the towns together as I treadled my days away. I cherished the journey and was unwilling to blame it for the scarcity of willing flesh — it was off-season, that’s all. I looked to the slowly nearing sunshine state with all the chest-pounding anticipation of a hot date.

Florida… The word dripped with promise like a well-kissed woman, and I ached to probe her salty shores in search of Beauty.

But she was still far, far away — much farther than the network world of friendship and fantasy that lay in wait behind every telephone. A close but dispersed community spanned the North American continent, and even in a lonely Virginia Beach motel room I could reach out to my online lover, my invisible high-tech bombshell, the Philly phantasy who had shattered my credit with Ohio Bell. Stephanie…. O sweet Stephanie.

Electronic romance is a strange and flawless thing. Built largely on fantasy, it possesses a sort of perfection — lovers matched precisely to each other’s needs. It’s unhampered by the morning breath and unwashed dishes of face-to-face reality, yet it is vastly more satisfying than the pent-up postal passions of pen pals. It is immediate, yet still permits careful sculpting of the well-turned phrase (unlike the compressed urgency of a long-distance phone call). Miles mean nothing. And there’s a bonus: the endearing words can leave a permanent record that lingers long after warm fingers have stopped their typing and stretched lazily back to the on-off switch.

Of course, this kind of loving does lack a key element or two. When Stephanie materialized in a swirl of teasing letters on my computer screen, I yearned for a touch, a taste, a smell, a stain, a forgotten earring — something. Anything. But there was only one person in that generic motel room — me. Me and my computer and a steamy fantasy that sizzled through the network right alongside stock-market reports and airline reservations.

Our lust, compressed into little spurts of data, was processed through an X.25 packet-switched network and routed to a time-sharing host system in Columbus. When Stephanie touched her delicate ENTER key with a moist fingertip, a shudder passed through the very fabric of America’s information society and came to roost in my heart.

Yeah, yeah, I know. I’ve heard the question before: How can I get so excited about a bunch of words on a screen?

Screen! What screen? Do you think I noticed the computer that night, an 80C85 microprocessor dutifully executing a terminal program? Did I care that a 300-baud modem was inhaling and exhaling high-pitched tones that bore in their shrill warblings the distillation of our desire? Did I marvel at the character generator that converted a data stream of pillow-talk into something I could read on a liquid-crystal display? Hardly. The computer was no more in the spotlight than a telephone, and the passionate love-bytes passing through the Model 100 left little wet spots to soften its cold machinehood.

It was a good session, there in that Virginia Beach motel. For nearly two hours our fingers danced across keyboards and bodies alike as we made love via the computer network. Stephanie was entirely a projection of my imagination and may have actually weighed in at three hundred pounds, but I doubted it. A nude Godiva-haired goddess had risen from the pages of Penthouse to please me.

We began on the beach, where I traced the outline of her left ear with a suntan-oiled finger. This quickly evolved into a massage, described in exquisite detail: “I pick up your left foot… kneading it gently, singling out your toes one by one for swirling, stretching strokes. A finger down the sole makes you jerk — I squeeze softly until you relax…”

We nibbled and talked, kissed and touched, our hands soon delivering sparks instead of the deep relaxation of massage. Electrified, we pressed on, delighting in the exploration, the sensual touches, the tastes. None of this seemed at all odd. We each came alive for the other in a profoundly erotic fantasy, genuinely in love. At last we lay sprawled along the eastern seaboard in a glistening cuddle, hair splayed across pillows 265 miles apart, uttering soft little electronic whimpers of exhaustion. I fetched her a glass of water and stood a moment in the doorway to contemplate the gently heaving body of my spent tigress. It was perfect, of course. In many ways, this was better than reality. We kissed goodnight with a long, satisfied sigh, then signed off with a reluctant control-P.

But on open channel later that night, I was called to /talk by a west-coast programmer calling himself HAL-9K. “Are you one of the legions who are in love with Stephanie?” he asked. With a quailing gut I told him yes, yes I was, and why the hell did he ask?

“Well, you’re not alone,” he said, sadly raising an imagined glass in transcontinental toast. He named five others, including himself and Allegro, and speculated that perhaps we’d been had. The entire social life of this self-described petite blonde beauty was apparently taking place online, and no single mortal male with other things to do could ever be enough for a world-class network nympho.

“Maybe she works for CompuServe,” I offered, taking an angle-bracketed sip of compu-booze. “She certainly does her part to increase online revenues.” I was trying to soften the impact of his news, and could still sense her complex fragrance in the room: a heady blend of woman, perfume, and coconut suntan oil.

It was time to make a few calls. But as I reached for the phone, it rang. Eh? Nobody knew I was here. I paused with my hand on the instrument, letting it ring a second time before picking it up. “Hello?”

“Mr. Roberts? Could you report to the office please?”

“Just come to the office.” I listened to the sudden dial tone with a small red flash of rage.

A few minutes later, dressed and smelling of coconut, I appeared at the front desk. The sergeant looked up sternly and jabbed my Master Card ticket. “You have been denied credit!” he barked. “What do you plan to do about it?” I remembered the impotent frustration of my time in the Air Force, driven by circumstances to respect the very men who least deserved my attention.

“Let’s give VISA a try,” I suggested weakly.

He tore the paper in half with a dramatic gesture of contempt. Already worrying about where I would end up spending the night, I handed him the other piece of plastic — which he made a big show of scrutinizing under a desk lamp. “Hmm. There’s only one way to find out. Let’s just see how the company feels about this.”

As he was reading my numbers to some unseen presence, I waited uncomfortably for the verdict. Electronic mail from Kacy had been reminding me of unpaid bills, calls from the bank, late notices, and so on. We were having cash-flow problems, big ones. But I was high on the journey, living the low-cost lifestyle of campuses and couches (this was my first motel: accommodation costs since Columbus had so far totaled a mere $8.25). Now some pompous retired sergeant was hot on the trail of credit-card fraud, adding considerable spice to his otherwise boring evening.

Suddenly his shoulders slumped. “Oh,” he said into the phone, then turned to me with obvious disappointment. “Well, your VISA seems to be OK.” Now I felt guilty about that.

Back in the room, smarting from the embarrassment of bad credit, I stared at the computer. It seemed a window into another world — a world of passion and intrigue, information and technology. In that world I could flit freely from fantasy to fantasy; in this, I could be humiliated by a sneering motel clerk. The choice was clear.

I signed back on and prowled Dataspace until sunrise.

Online Culture: Here, decades later, it is difficult to express just how radical a social transformation was taking place… well beneath the radar of the general public. When people met and fell in love via computer network, it was a rarity, and the first known marriage of non-local people who met online occurred in 1983… about the same time I was pedaling south and shifting my sense of home to this thing I called “Dataspace.” The kinds of steamy scenes I have described were a sort of open secret among online denizens (and embarrassing to the network companies, though undoubtedly profitable at $5-6/hour!).