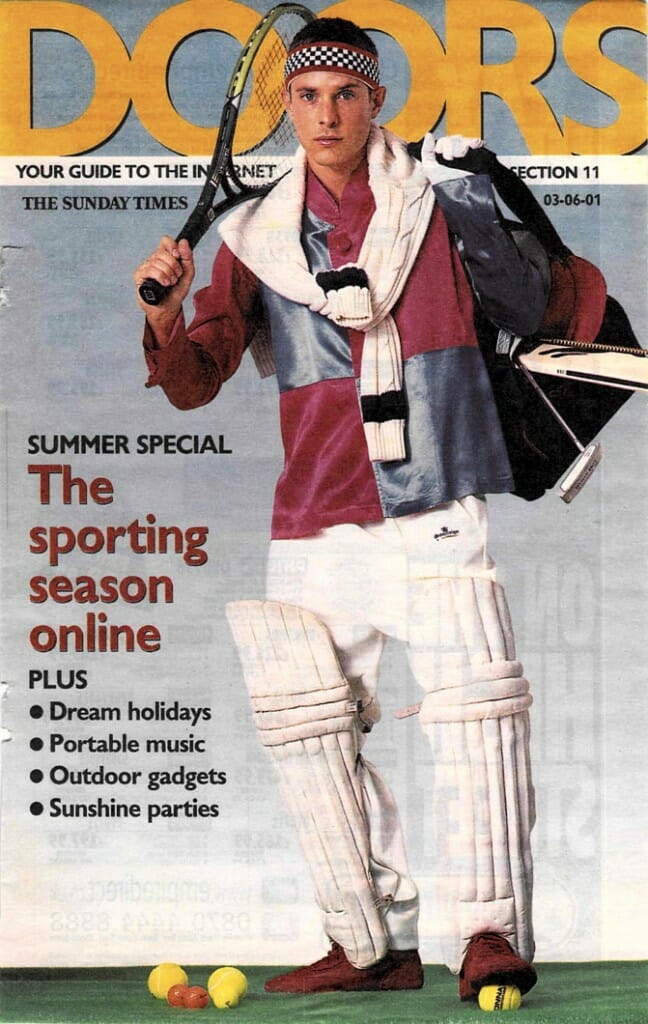 One of the phenomena that figured prominently in my ongoing media coverage was the very simple fact that I was in the same business. It was not uncommon to go into an interview with a reporter smirking at the bearded eccentric on a bicycle, then watch the dawning realization as we conversed: “Damn… this guy is doing what I do, but he gets to have FUN at the same time!”

I can’t speak for Danny, as we have unfortunately never met, but I get the impression from the tone of this back-page piece that there was much more to it than a simple technology story. This appeared just as the Microship project was nearing its too-brief climax. It makes me feel a little wistful…

Friends, I know, look on with concern when I scrabble around for an internet connection on holiday. I have ducked into cybercafes in Marrakesh, scouted for possible internet service providers in the Basque country, and pinged home pages in Madagascar. “Can’t you leave the net at home?” they wonder. “Can’t you, just this once, put that modem down? Or at least stop hitting me with it?”

It is not what you think. I am not, as a platoon of ex-employers will unhappily confirm, a workaholic. I can, despite what one might guess reading these columns, turn off the net for more than 45 seconds (okay, 40). Most vitally, I do not hate holidays. No: ever since I was seven, I have hated holidays ending.

I do not want to get away from it all this summer. I want to stay away from it all. That is why I spend all my time checking out how the net works in foreign countries. Because if I fall in love with an exotic holiday location, and it has decent connectivity, I do not need to go home at all. If I can get online, I can work. And if I can work where I holiday, why holiday at all? 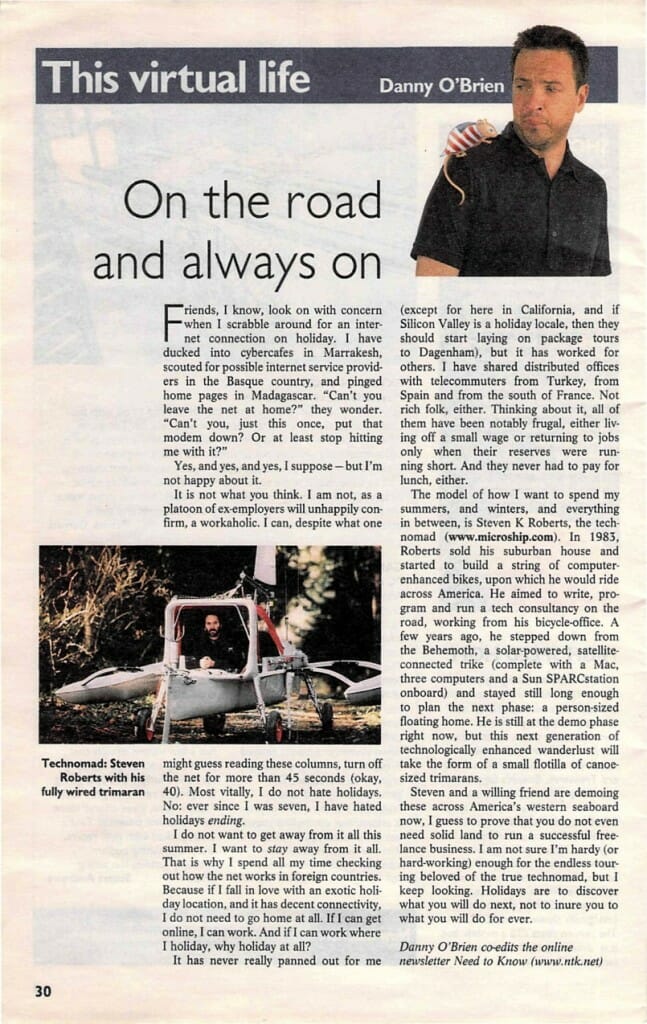 It has never really panned out for me (except for here in California, and if Silicon Valley is a holiday locale, then they should start laying on package tours to Dagenham), but it has worked for others. I have shared distributed offices with telecommuters from Turkey, from Spain and from the south of France. Not rich folk, either. Thinking about it, all of them have been notably frugal, either living off a small wage or returning to jobs only when their reserves were running short. And they never had to pay for lunch, either.

The model of how I want to spend my summers, and winters, and everything in between, is Steven K Roberts, the technomad (microship.com). In 1983, Roberts sold his suburban house and started to build a string of computer-enhanced bikes, upon which he would ride across America. He aimed to write, program and run a tech consultancy on the road, working from his bicycle-office. A few years ago, he stepped down from the Behemoth, a solar-powered, satellite-connected bike (complete with a Mac, three computers and a Sun SPARCstation onboard) and stayed still long enough to plan the next phase: a person-sized floating home. He is still at the demo phase right now, but this next generation of technologically enhanced wanderlust will take the form of a small flotilla of canoe-sized trimarans.

Steven and a willing friend are demoing these across America’s western seaboard now, I guess to prove that you do not even need solid land to run a successful freelance business. I am not sure I’m hardy (or hard-working) enough for the endless touring beloved of the true technomad, but I keep looking. Holidays are to discover what you will do next, not to inure you to what you will do for ever.