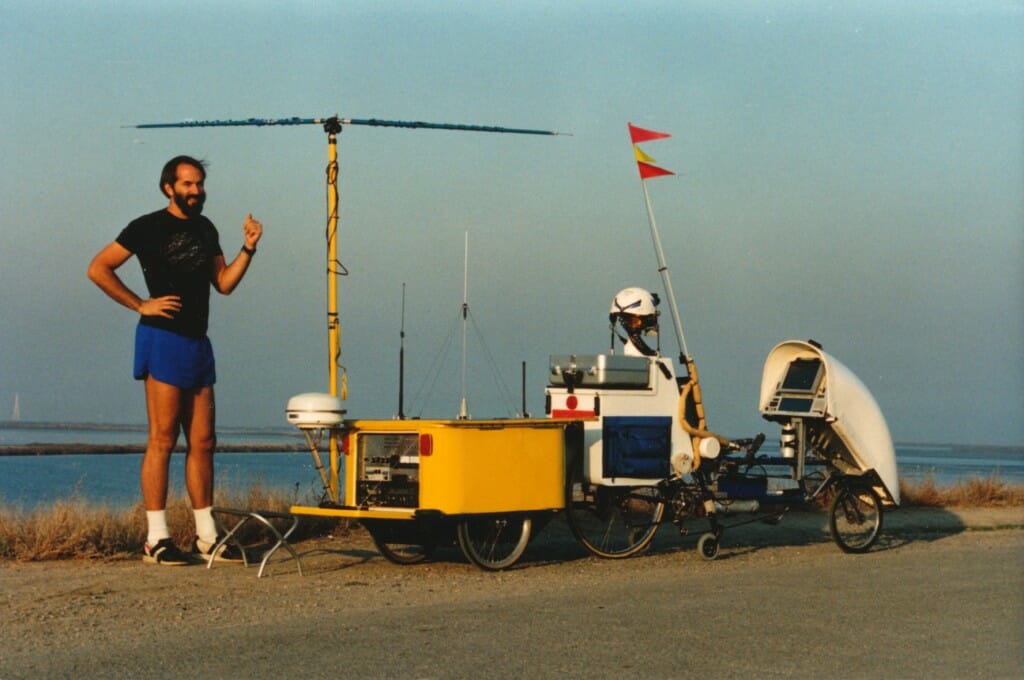 This posting in the Bikelab series featured a speculative tale of technomadic adventure that helped crystallize the vision of the bike systems. Even with specific references to long-obsolete products, it holds up nearly a quarter-century later as a compelling geek fantasy. (The original post also announced my weekly open-house for Sun engineers, as well as the urgent quest for a home base and office manager before my scheduled departure only 26 weeks away.)

The mysteries of the Road seem abstract when I’m so deeply immersed in the technical side of the project that actually having to pedal it seems like a design flaw.  If you want to know why I am doing this, relax and put yourself into this scene:

Hot sweat steams inside layers of polypropylene. The road, winding and narrow, is a relentless 9% grade stretching before you into the clouds. An occasional logging truck splashes past with a roar and the smell of chopped fir. Sounds: rain ticking ripstop, your own rhythmic panting, the soft clatter of chain and derailleur, an occasional muted birdsong, your mate’s voice breathless in your ear via 2-meter ham radio, the soft whir of a pump pushing coolant through the helmet heat exchanger, the bike’s speech synthesizer piping up to announce system events or incoming calls.

The heads-up display shows a shimmering red scrolling map of Shasta County, your own location a centered blinking arrow derived from the GPS satnav system, tonight’s campsite a slowly nearing tent icon. You zoom out, and 32 miles ahead is a house; you double-click it with the thumb mouse and a window opens, showing the database record of an online friend you’ve never met. Too far… maybe tomorrow night.

The console in front of you carries both Mac and DOS environments, with the former able to open under Multifinder an X session to the SPARCstation (file server and CDROM mapping workstation) behind the seat. The main display is a HyperCard graphic user interface to the FORTH embedded control systems, and you see at a glance that the battery is at 68% with 23.4 hours to discharge predicted at present sliding-average rate… no solar power today. You touch a thumb button to engage the head mouse, and with a subtle nod,  you click on the ham radio icon. A virtual front panel pops up, looking remarkably like the Icom HF transceiver back in the trailer — with a click of another button it comes to life, while below your awareness a trio of FORTH processors in the bike’s major nodes set bits in their audio crosspoint switch matrices to establish a bidirectional audio link between radio and helmet. Your Ohio friend is still chatting away on 20 meters… you break in at a polite moment and let him know you’ll be on from the campground after dinner: will he have time to check some documentation for you? There’s a databook you never got around to adding to the bike’s microfiche library, and as Murphy would have it, that’s the one you need.

That issue shelved, you open a text window and add a few thoughts to your article about this remarkable mountain range, typing flute-like on the binary handlebar keyboard with barely perceptible movements of your fingertips. You are actually keying in macros, which are interpreted by PRD+ running in the background on the T1000 that occupies the lower third of the console. “otr” you key, and “on the road” appears on the screen; continuing in this fashion, you appear to the system as a 100+ word-per-minute typist, blazing away through a FORTH-controlled matrix that masquerades as a standard Macintosh keyboard.

A synthesized voice in your ear: “Satellite pass complete; you have mail.” Speaking distinctly, you say “read it” into the boom microphone; the Covox interprets the command and the Audapter immediately reads you a friendly note from a woman in Australia, ported from Internet via a gateway in Silicon Valley.

Another logging truck, too close! You touch a red thumb button and the air horns blast — the driver swerves and toots back. Grr. The road levels, the rain finally stops, and it’s a downhill coast all the way to camp. Occasionally you squeeze the brakes, but never quite enough to engage the hydraulics — the bicycle control processor senses the pressure rise in the system and directs the regenerative braking controller to draw a proportional amount of power from the variable-reluctance front wheel hub. This satisfies your braking requests, and dumps a couple hundred watts into the power bus. Today it recharges the batteries… on a sunny day, the excess power would be passed to the solid-state refrigerator that cools the thermal mass of drinking water… providing a heat sink for your helmet cooler. It feels good to conserve scarce resources.

An hour later you are camping, smells from the stove intoxicating, the sweet buzz of healthy tired muscles retreating in the glow of firelight, Grand Marnier, and a smooth CD on the stereo. In its own tent, the bike waits, security system alert and watching for movement. You can’t relax yet, though — you have to consult an OrCAD file prior to the sked with the ham in Ohio… you climb into your tent, and under candlelight open an aluminum suitcase, flip up a small antenna, touch a key to awaken the laptop, and sign on to the bike via UHF business band packet datacomm. A few quick commands, and you hear the Ampro PC’s hard drive quietly spin up off in the trees — then the file enters your local system RAMdisk in short 4800-baud bursts. Ain’t technology wonderful? While munching linguini with clam sauce, you peruse the schematic and make a few notes.

Once you get the pinout data from Ohio and finish the changes to the CAD file, it’s time to ship it to your partner on the design project. The final version will go out machine readable direct to the printed-circuit fab house, of course, but this one is for comments… you extend the fiberglass BYP (big yellow pole) mounted on the back of the trailer, aim a 6-element 900-MHz yagi antenna in the general direction of Redding, and via the laptop RF link direct the system to check for clear cellular phone service. That established, you pass a print capture of the schematic file to the fax software and let the bike handle the details of sending it to a fax machine in Boston.

While the cellular antenna is set up, you rlogin to your base SPARC to send a long-overdue column to the alias and browse a couple of newsgroups, then kick back for a relaxed evening of staring into the fire and chatting with your sweetie. Ah, the outdoor life…

(Are you still wondering why I do this?)