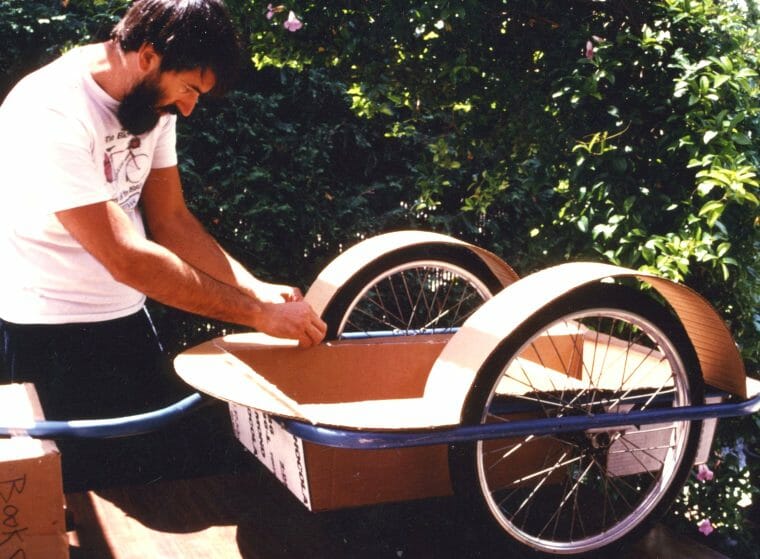 The cardboard-core fiberglass packaging technique discussed here, originally suggested by David Berkstresser, has been such a popular subject that it long ago landed on its own page… even though it was originally part of this Bikelab Report. I’ll leave it over there for now and devote this post to the actual implementation of that space, which was one of the three major equipment bays on BEHEMOTH.

RUMP packaging is something everybody thinks about at one time or another in their lives, and overweight BEHEMOTH is no exception. The RUMP is a cellulose-core, silicon-matrix, polyester-filled composite (CSPC) enclosure mounted to the Blackburn rack on the bike’s rear — occupying the entire space a long-distance cyclist normally devotes to panniers and various lashed-on packs. But all the usual touring gear lives in the trailer; the RUMP is the middle of three major electronics bays.

A quick overview is in order:

The port RUMP-bay is a utility pack space for quick-access items on the road. The starboard bay was intended to be a refrigerator, a thermally-insulated space pumped by a pair of Melcor Peltier-effect modules — taking advantage of excess solar or regenerative braking energy to cool my drinking water and, via a fluid loop, my head.

(Note: I never finished this active refrigeration system, instead using a 7-liter tank to hold crushed ice and water, circulated via a peristaltic pump through the Life Support Systems helmet liner… an elegant and efficient solution to the body-overheating problem.)

This enclosure (an integral part of the whole RUMP, but effectively a sealed space) carries the stereo amps and a pair of Blaupunkt speakers pointing at my head, the RUMP control processor, taillight controller, all major security system components including microwave sensor and UNGO box, paging system, the base unit of the Swintek full-duplex wireless intercom, an Ampro core-module stack for Private Eye control (on a LAN to the console), and the FORTH 6HC11 RUMP control processor to hold it all together and handle local audio and serial crosspoint matrices (replicated in console and trailer and linked by general purpose long-line buses).

This whole unit is notched out to accommodate a Zero Halliburton case with solar lid, containing the SPARCstation IPC, along with its color LCD screen and added SBUS controller, 210 meg hard disk, CDROM drive, and associated interfaces (CellBlazer and local network).

Now you see why the RUMP packaging is such an issue. Here we have what essentially amounts to a fiberglass composite box on the back of a bicycle, subjected to rain, shock, direct sunlight, wrecks, sweat, and other forms of abuse that would give an industrial-control system designer bad dreams. Yet it has to protect things as delicate as hard disks and CDROM drives. (In case you’re wondering, by the way, the Sony audio CD player and related stereo gear will live under the seat in its own enclosure for easy access… the NEC CDR-35 dual-function CD turned out to be too sensitive for mobile audio use without extensive cushioning.)

The floor of the main RUMP-bay is fiberglass-covered plywood, and it is bolted with stainless 1/4-20’s down into an aluminum plate TIG-welded to the Blackburn rack. A baseplate of .062 angle-stiffened aluminum sheet is mounted to the floor via four shockmounts from Lord Manufacturing. This is slowly becoming loaded with equipment, including one of the bike’s three main Sonnenschein batteries (12 pounds) to allow uninterrupted system operation when on local rides without the trailer.

But the internal stuff is pretty easy. The hard part is keeping the water out, minimizing road noise amplification, and allowing at least a minor accident without having to do nasty fiberglass surgery. Everything is gasketed, of course, a non-trivial problem in itself — usually with EPDM rubber strips glued into all critical closures. Gasket compression on the lid is achieved with Southco soft latches, lovely rubber assemblies that allow all sorts of imprecision while still looking clean and professional. These are mounted with careful attention to the dangers of point-loads in fiberglass, and I machined in some adjustability slots with the aid of trusty Cecil (the milling machine).

The manpack mounting introduces special problems of its own. The idea here is to be able to grab it in a single quick motion whenever I leave the bike, and have with me a complete communication link back to the server, cellular gateway, security system, audio monitors, speech I/O, and so on. This will let me turn my back on BEHEMOTH now and then to think about something else… but still be in touch. (NOTE: this was originally intended to be the briefcase for general personal items, but it was much too heavy and mechanical… I put the SPARC here instead, since I wanted to ride a unixcycle, and tossed a soft laptop pack in the trailer.)

Two of the original Zero aluminum feet (which are noisy and rough on surfaces anyway) have been replaced by rubber ones, and the other two by little Z-shaped brackets cushioned with Permatex Color-Guard (a rubber dip coating often used for tool handles). These are inserted into slots in the assemblies that make up half the RUMP-lid mounting system, the case is dropped onto its foam nest, and a single soft draw latch is used to cinch it down.

The port and starboard RUMP-bay doors are a real problem, not yet entirely solved. The original plan was for flush fiberglass doors, but the hardware overhead required to achieve reliable gasket compression was absurd. The current plan is to mount a fabric bulkhead with riveted aluminum strips, with a hooded zipper providing flip-down access to the internals. This also allows addition of a pannier-style outer pocket, which will help absorb shock in accidents. Fiberglass ALWAYS loses in an encounter with concrete.

Finally, there is the problem of cables… entering the RUMP just behind my shoulders and leaving it down by the trailer hitch is the bike’s cable harness, a rather bulky affair of various wire types all terminated by LEMO environmentally sealed connectors. Again because of point-loading problems, these headers will be aluminum panels gasketed over large cutouts in the fiberglass. Other fixtures that don’t impart significant stress — like speakers, the taillight, and so on — require no special attention beyond sealing.

Back at the beginning of this article, I mentioned that the RUMP is a cellulose-core, silicon-matrix, polyester-filled composite enclosure. If you wondered what on earth I meant by that, it is well-described over here. Basically, the underlying structure is assembled with corrugated cardboard and a hot-glue gun, then the outside corners are softened with a knife, inside ones are filleted with thickened goo, and the whole thing is covered with fiberglass cloth arranged where possible to take sharp corners on the bias. Additional fiber is built up at stress points, and the core is filled wherever there will be compressive load from fasteners.

After the layup, the weave texture is faired out with a filler made of microballoons, sanded smooth, then it’s off to the paint shop to be made beautiful (this was done with Imron).  I scanned three photos of the early steps in the process… all can be clicked for somewhat larger versions: