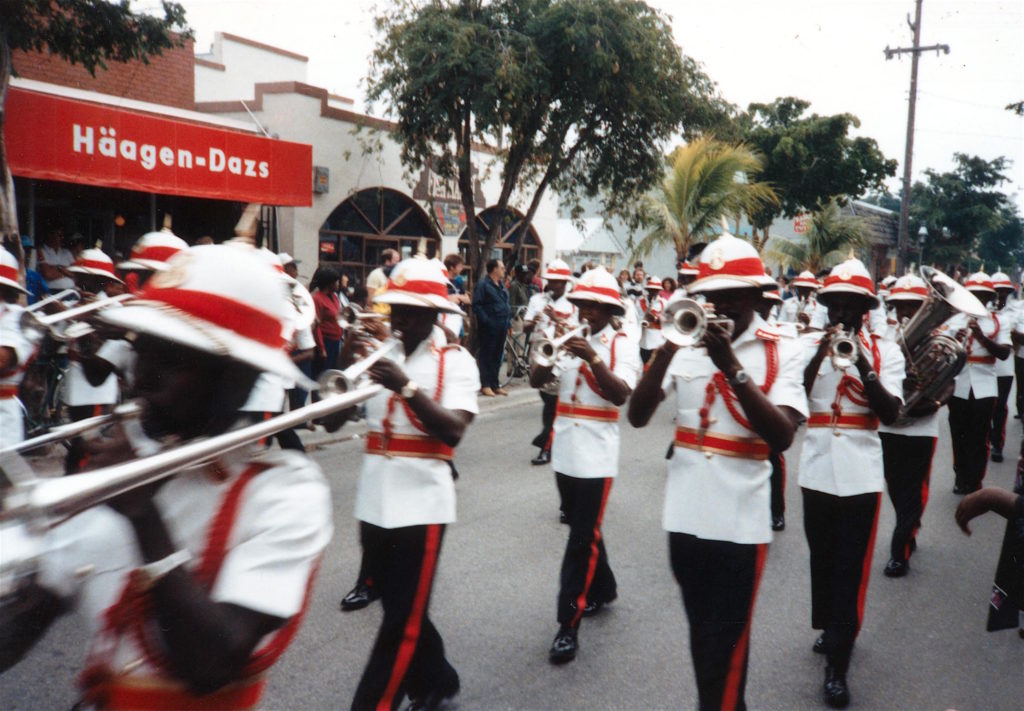 It’s better to burn out than fade away.
— Neil Young

Nothing had changed, but everything was different. I rode the familiar streets, taking a serpentine route to where I supposed the action was. I didn’t have the money to stay on at the Merlinn, and I wasn’t ready for the dormitory environment of the hostel.

Oily people laughed and baked on the palm-strewn municipal beach. I paused to watch bikini-clad women play volleyball, a sight that would normally have enchanted me. It failed. I saw a young couple expose two rolls of film with images of a young puppy, a furry brown beast that gamboled sandily over to bite my feet with needle teeth. Another couple lay kissing, aroused, squirming against each other; a few feet from them a beauty of dark Moroccan features dozed in the sun, glistening and <pang> topless.

I stopped at the public restroom where a gray old bum stood brushing his teeth and looking at me hopefully. I nodded a neutral hello. He spat and tossed his toothbrush back into the rumpled paper bag that held all his worldly possessions, then straggled out the door.

Duly inspired, I brushed my teeth, then emerged squinting in the sun, climbed onto the bike that held all my worldly possessions, and straggled down the street. Hmm.

Needing a change, I pedaled slowly inland — as inland as I could get on this one-by-four mile island — and gazed at the houses. The architecture ranged from gaudy painted shacks to lavish mansions obscured by wrought-iron fencing and fragrant foliage barricades. The mansions held all their owners’ worldly possessions, as well. I guess we’re all bums on some level… or perhaps all wealthy.

I tried hard to think “wealthy” as I continued my aimless trek around town, but it wasn’t convincing. Things were grim. Lumbotech was making serious legal threats and my other creditors were grumbling, some of them loudly. The last message from snowbound Kacy had blown a cold wind over my beach fantasy with this closing wish: “I sure hope you have a couple of aces up your sleeve.” It seemed an absurd thought there in paradise, but my trip was in jeopardy.

In ostrich-like denial of the mounting crisis, I rode around, chatting with people and collecting invitations. It didn’t take long to discover that accommodations would be easy to find with the eight-foot-long door-opener sparkling beneath me, and by mid-afternoon I had stopped worrying about places to sleep. With tentative plans for the evening, I continued my work-avoidance trek around the colorful streets, promising myself that I would go somewhere and write a Popular Science article as soon as I made one last loop through town.

A woman in a Toyota passed, waving and flashing me a grin. I smiled back. She drove on, looking over her shoulder at me and ignoring the road ahead. With a sudden pounding heart, I realized she was drifting to the right and heading for a parked telephone service truck. I shouted and tried to wave her over, but she interpreted my gesture as a friendly greeting and gave a jaunty one in return. LOOKOUT, DAMN IT!! I pointed urgently and she got the message — too late.

I parked and ran over to her, shaking and filled with concern. The front of her freshly washed yellow car was crumpled against the dirty black bumper of the truck, and she was slumped over the steering wheel with a trickle of blood on her chin. A lineman was scurrying down a telephone pole, and two elderly pedestrians had stopped to gawk. I leaned through the window and touched her shoulder. “Hey, are you OK?”

She looked up at me, her face contorted in rage. “God damn you! Look what you made me do!” Her nose was bleeding, tears streamed down her cheeks, and she was mightily pissed — and not in the British sense.

“Bullshit! If you didn’t have that stupid weird bike, this never would have happened. You’ll be hearing from my attorney you… you… son of a bitch!” She fumbled in her purse with shaking hands and produced a pen and notebook. “What’s your name!”

I shrugged and handed her a business card, asked if there was anything I could do, and then moved on, more depressed than ever. Yesterday someone in Key West loved me; now someone hated me.

I returned to the beach intending to get some work done, parking the bike on the sand and spreading out a towel a few feet away. I opened a text file for the Popular Science piece and stared dully at the little screen. The words did not come.

Days passed as deadlines loomed… and yet on the surface it was all sparkly: perfect sunny days in January, the bike a constant attention magnet on the street, beach flirtation landing me in a playful interlude that makes me sigh and wince in retrospect. I grappled internally with the awkward juxtaposition of loves real and virtual, the boundaries between them no longer so clear. I was frolicking my days and nights away, while the whole adventure threatened to collapse around me.

I sent Barb electronic mail about all this, and she wrote back: “Go for it, my love! I thought long and hard about us and I know that trying to hold you is like trying to hold running water by plunging my hand into it and making a fist.”

But it wasn’t that simple. By the next afternoon everything made me want to leave Key West. Everything. It was time to go: I was conched out, Key Wasted. My new friends, Monique and Sara, left in a farewell flurry of fragrant hugs, their tropical vacation over — and within minutes a cold front moved in, chilling me inside and out.

I found my way to a pay phone on Duval Street and signed on to CompuServe to receive more bad financial news, trying all the while to ignore a pair of tacky tourists reading the screen over my shoulder. (“Honey, come quick! Here’s a show!”) Lumbotech laid it on the line as they watched:

“I have conferred with our lawyers about the possibility of taking a secured position on your Dublin property, but due to other liens we have decided against this idea. I will remain patient no longer. If the remaining balance of $8,192.47 is not retired within seven days, we shall have no alternative but to initiate legal action.”

I slapped the computer into submission. God damn it.

I camped that night on Stock Island, dining in my tent on guava cheese danish and apple beer. Both were horrible. I felt like a transient, a drifter — stopping at pay phones, ogling the women, hoarding stale bread and oily bits of cheese in a paper bag bungeed to my packs. High-tech notwithstanding, I was broke. Without cash, I was forced to use over-limit credit cards to buy food, eating extravagantly when I could least afford it.

And worst of all, the loneliness was back — an awkward sense of having wasted opportunity. I re-read EMAIL from Barbara that was still stored in the computer. Love. I drifted around, unsure of myself, meeting people but not connecting. It was a mixture of itchy tires and the need for love; restlessness versus the nest.

“Sylphide?” I whispered into a yacht club pay phone.

“Mary works at the library.” She was barely understandable. “Uh, she’s worked there for a while, hasn’t she?”

“Why does it upset you?”

Sudden anger. “Yes! She’s fine, damn it! In libraries they have newspapers. From all over. Including Key West.”

Oops. The “Love at First Byte” story had not only gushed about my trip, but also included such comments as: “They are talking about the possibility of someday hooking up two computers and two bicycles…” and “For the week that Steven Roberts and Barbara Newlin spend their ‘beach fantasy’ in Key West, writing books is their last concern. But their computers are probably working overtime.” Throughout, the piece stressed our romance.

“Uh, Sylph, the reporter got a little carried away…”

“So do I, but I think any old hug would be fine with you.”

I winced and told her I was on my way. I wanted to stop the trip for a while — sometimes it’s not easy to get what you always wanted.

Yes, it was time to leave this island and get serious: the success of the journey depended on it. Oh yes, I thought, pushing hard against the pedals, now I’d really produce — magazine articles, columns, online stories, book proposals. The party was over. I mentally cataloged all the potential projects and added up the dollars. Hey, no problem!

Gotta get off this island first, though.

But doing anything that deliberate is difficult in this place of mañana, and the attempt was further complicated by a kind of “trip morality.” Riding back up Highway 1 through the land of red guitars would be acceptable, but a waste — I’d earn no red atlas-lines for a backtrack. Accepting a proffered van ride to Fort Meyers was out of the question. What I really needed was a boat trip to the mainland.

“Found that boat ride yet?” someone asked one afternoon.

“Working on it,” I lazily replied from my towel on the beach. “Any shrimpers head out of here for the Naples area?”

“Not that I know of. Checked around the docks?”

And there the matter rested for two more days. Really, I had to rationalize, what was the hurry? It was eighty-five degrees in mid-January, and the rest of the country was freezing. And I was sensing a sort of fear, masking that moment of motivation: I was afraid to leave. Key West was isolated, warm, quiet, friendly — a land without a network node, a land of languor.

To hell with the rest of the world. I bounced around the couch circuit for another week, staying in a different place every night, living the life of a drifter, dreading the eventual return to that crazy American mainland of traffic and creditors.