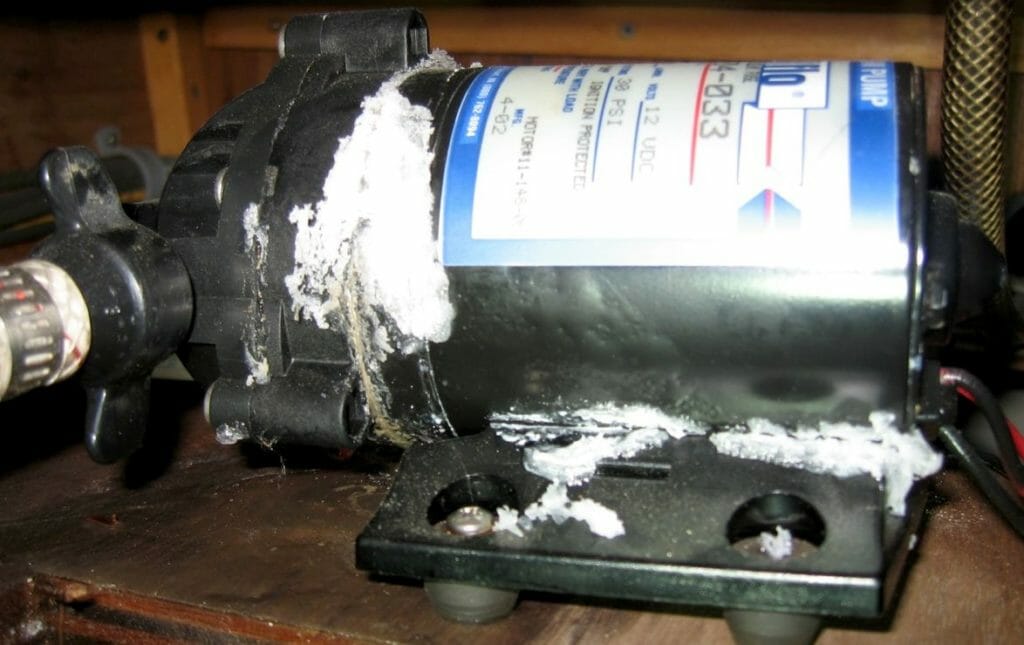 It is often said that cruising is the art of fixing your boat in exotic ports, and indeed, a large percentage of the epic to-do list is about repairs and maintenance… not shiny new things. That’s the curse of a used boat.

A few months ago I was alarmed to discover salt water in the bilge region under the galley, and went on a quest to find the source. Fortunately it was not any of the nearby thru-hulls… but sure enough, tucked impossibly away under the big drop-in fridge, I found the pump in the photo above.

That salt-encrusted monster was the seawater circulation pump for the AC refrigeration system, which allows it to dump heat more effectively than into the fairly dead airspace under the galley sink. When running, it was dripping about three drops a second, and had obviously been doing so for a while.

I was surprised to discover that the installer had just used a Shurflo pump made for pressurized fresh water systems, complete with a series-wired pressure switch. This is not rated for salt water, but a guy at Shurflo said it would be fine to use the same model. I wasn’t comfortable with this and posted a question in Cruisers Forum, leading to lively discussion about how much flow is really necessary (not much). I was looking at using a little 1 gallon-per-minute wobble plate unit that I have in stock, but that was starting to look like false economy.

My friend Al Thomason visited the boat a few weeks ago and this came up in conversation… and he pointed me to his favorite pump vendor (http://depcopump.com). Analysis of their catalog and a chat with one of their people got me down to two options: a hard core March centrifugal (#893-04) or the proper variant of the diaphragm type above (2095-273-200). The latter was about $70 cheaper but draws more current… though it can run dry without damage and self-prime. The more efficient March would have to be installed in the engine room to stay reliably below waterline, but even then would require special attention after a haulout since those will self-destruct if run dry.

Easy choice. With the warmer days of Spring starting to arrive and the fridge working harder with the backup air heat exchanger, it was time. The Shurflo arrived last week, and I went into contortionist mode (laughable, in my case… working under the stove with left hand only stretched over my head, using improvised tools in the narrow space). It was awful, but the result is a delight and doesn’t even leak:

(See that little horizontal spot through the window in the plywood at right? That’s where the old one had been. Just getting the screws out was a bit of a nightmare…)

By the way, that duct-taped black hose leaning randomly against a vented loop is an important thing that caused all sorts of head-scratching until it was located… it is the capped-off vent for the tanks in the automatic oil changing system. The flexy air duct is a repurposed engine vent fan that now pulls a slight vacuum in the cat box compartment… that will get switched by the local controller node and left on for 15 minutes or so after any occurrence of motion detected by a passive IR sensor.