It happens every year. Suddenly the sun is sparkling on the water, I realize another orbit has passed, and I peer critically at the epic project list with an eye toward culling non-essentials.

One of my favorite kinds of progress involves getting new gizmology off the shelf and into actual use; it’s easy to get bogged down in endless repairs and rewiring, but important to remember the geeky underpinnings of this project and savor the shiny things. Let’s devote this post to four new toys that have made the cut and found their way aboard.

Nomadness is about combining passions into a lifestyle, and despite some daunting packaging challenges, a piano is a key component. My beloved Roland RD-700SX (along with related studio gear) now has a wonderful new home on Camano Island, and I bought the Casio PX-5S that was released in early 2013. This is already getting a cult-like following and has a surprising depth of capabilities, though I have barely gotten past the level-1 learning curve. A huge win for me, though, is that it only weighs 25 pounds and is no wider than it needs to be. Another excellent feature is that an engineer on the development team is very active in the piano forums…

In the photo above, it is shown with the CAD system (Cardboard-Aided Design)… the trio of 12U equipment racks with cutouts representing the objects that will be mounted in 19″ aluminum panels Real Soon Now. The key dimensions of this region are part of this plan; the angular placement of the cabinets matches the 52″ length and 12″ depth of the piano, though the seat has to be raised about 5″ whenever I want to play music instead of hunch over the desktop to do geeky things or peer into radio dials. 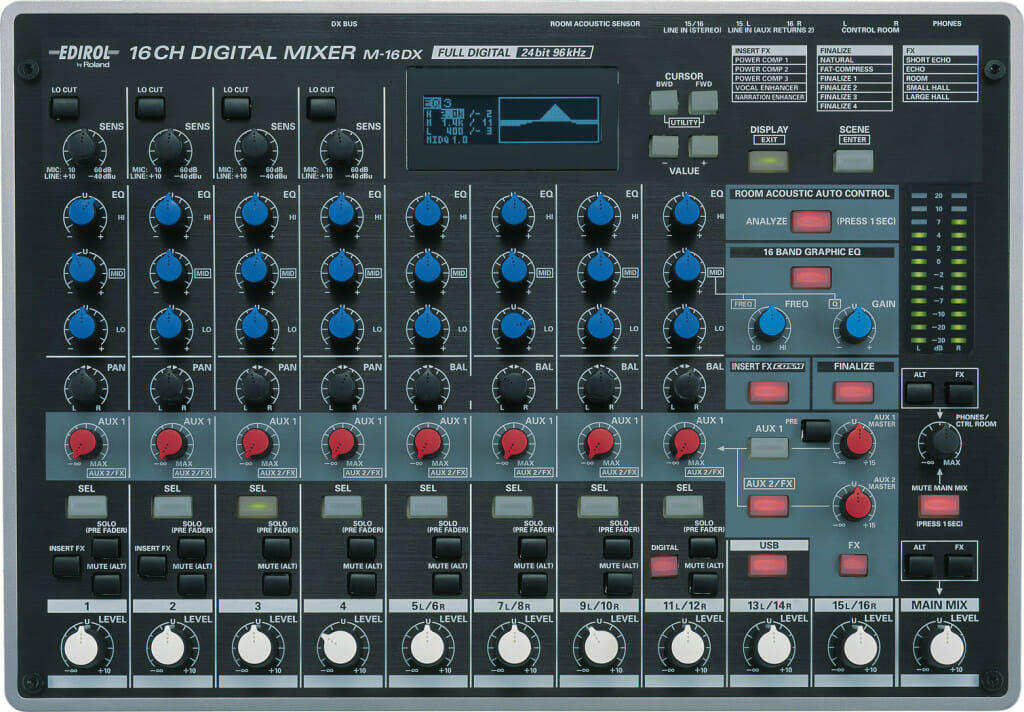 Integration of this has three components, the first of which is electronic and pretty standard: connection to the mixer that will live in the left-most rackspace (or the Sennheiser HD598 cans). I chose this mixer (sadly, now a “legacy product”) because the control surface is separate from the box bristling with connectors and is thus more realistically panel-mountable.

The second problem is what do do with the piano when not playing, and that will involve a full-length drawer that stows it well under the desktop… this needs to be fabricated soon, because I want my workspace back!

And the third challenge is seating, which had to be solved anyway… but now it requires significant height adjustment and easy removal of arms. This has been the subject of a ridiculous amount of research here, and I’ve chased everything from marine pedestal seats to hacked Aerons. The solution (which I hope is correct!) is a chair from SoundSeat, a small shop in North Carolina that is much loved by drummers for their robust and comfortable thrones. We will locally fabricate a socket for the gas lift, including a quick-release hinging system to make room for my galumphing body to awkwardly squirm under there when I need to pull cable or clean the cat box.

In the photo above, by the way, you can see the music stand… elevated 5 inches above the desktop. This ended up being a fabrication project, which is described in detail here.

I look forward to posting a recording and more about the PX-5S itself in a future post!

One of the essentials of daily life in this gizmological extravaganza is coffee, and not just functional drip. I’ve been an espresso junkie for a quarter century now, but for a long time have been putting up with sanely scaled minimalist solutions (the Aeropress, fiddly but reliable… along with the often-annoying Hario mini mill grinder and a klunky microwave-whisk method for heating and frothing the milk). But this is a bootstrapping problem… after doing battle with evil sleep demons, the level of competence needed to manually conjure coffee can be daunting. I am not smart enough to make latte until I’ve had latte. 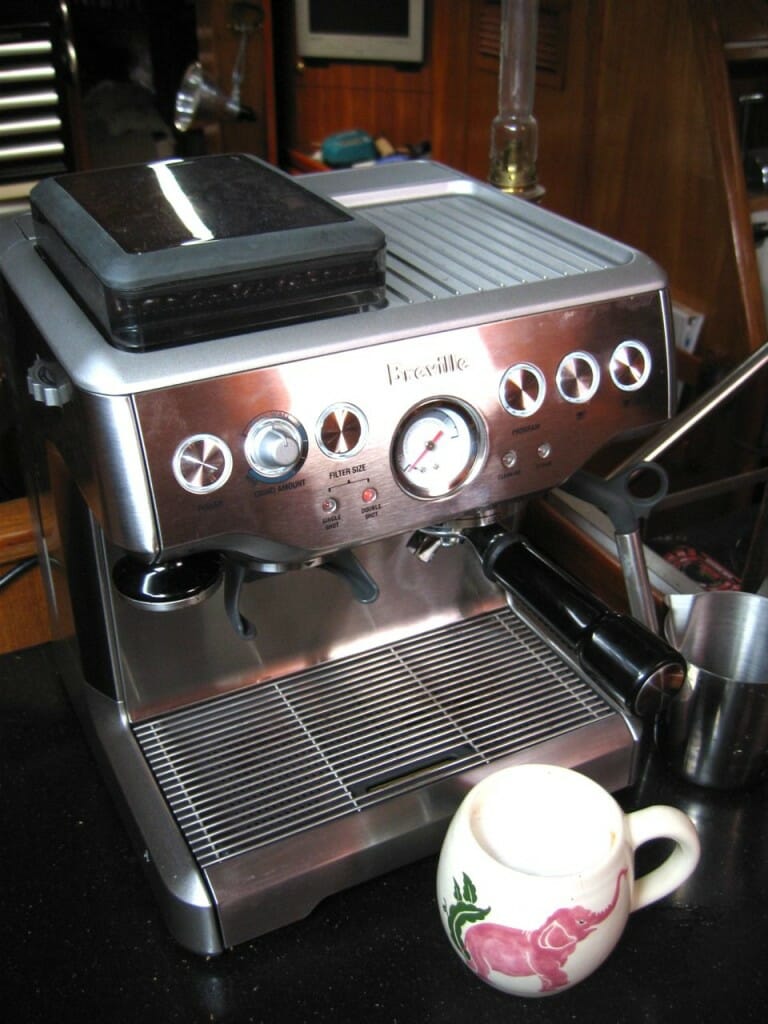 Yet, as I once wrote a coffee limerick that expresses my love for the bean:

I suck down my trimethylxanthine;
By the dregs, I am hyper and panting.
Whether drip, brew, or latté
(you see, I’m not snotté),
It gives me the buzz to keep ranting.
– Steven K. Roberts

Obviously I had to put some energy into finding a suitable system, and that launched another one of my obsessive research quests… revealing that the world of espresso machines is a rich one of religious fervor, brand-faithful fans, and deeply analytical reviews.

Whittling the choices down to all-in-one units of vaguely boatable scale, and happily discovering a good deal on refurbished units, I found the Breville BES860XL Barista Express exactly six months ago (link is to newest model, to which I upgraded in 2015). I wanted to wait a while before posting about it, just to be sure it was reliable enough to earn a recommendation. I’m happy to report that I love it, and have made approximately 400 cups… amortizing out at about a buck apiece, given the refurb deal that was available at the time. If I had bought all those at the tourist joint in town, it would have cost three times as much.

I did worry about the AC power requirement, but metered it with a Kill-a-Watt and was relieved to see that it was not too bad at about 75 watt-hours per mug (including warm-up, grinding, espresso extraction, steaming, and letting it sit powered on in anticipation of the second cup). I can live with that, and still carry the other tools for times when power is a scarce resource. Still on the to-do list: bolt it to a little fixture that will hold it in place, since I would really not want this flying around the cabin when things get feisty out there.

The machine is largely stainless, easy-to-use, and makes excellent espresso. (If you get one, by the way, you don’t need to buy proprietary cleaning tablets; these are a fraction of the price for the same thing.)

That ceramic mug in the photo was made by my mother before I was born. It’s nice to have a few old family relics in daily use aboard after decades of sitting on a Kentucky shelf.

OK, now I’m really going to gag a few sailing traditionalists. I have a fondness for fresh veggies, and those are expensive on this island. One of my long-range plans for the boat is a hydroponic cabin with LumiGrow lighting and relocatable networked modules… but there are a few projects that need to get done first, and that’s not going to happen this season.  I looked at scattering buckets of dirt around, but ehhh, that’s messy. 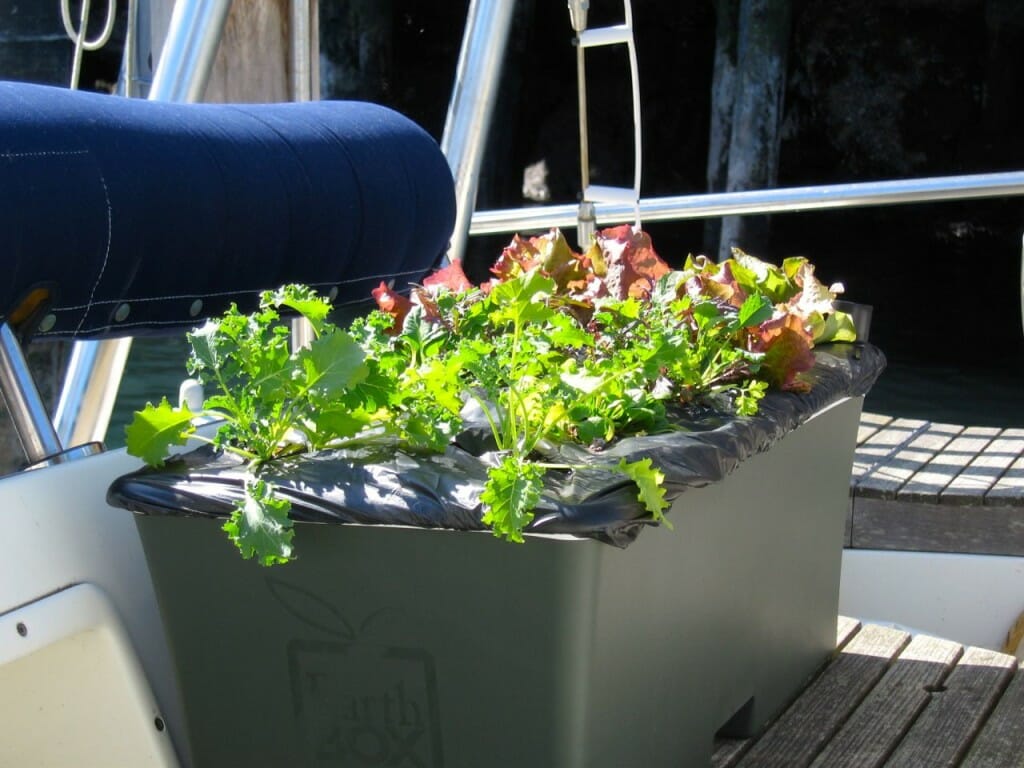 There’s a gadget called the EarthBox that has a very active online community, and it’s basically a self-watering system with a 3-gallon reservoir below a plastic grid. Above that is organic potting mix with added fertilizer and dolomite, and two enclosed columns in the corners provide a wicking path. A watering tube pokes out of one corner, and the whole thing is enclosed by a fitted plastic cover. To use it, you cut holes in the cover for the plants, then water it every day or so until it runs out an overflow port (at this stage, I give mine about one yogurt pot of water a day, at about the same time I’m fueling myself with espresso).

There’s a spot over the pilothouse where this can be out of the way, though it would have to be leveled and fixtured in place, and I have no illusions about it surviving any kind of truly heavy conditions. For the moment, it’s just sitting in the cockpit, and will probably be parked on the dock during local day sails (it’s about 80 pounds and 29″ long, and would interfere with sail handling unless moved to the topside mounting location… I want to test it before doing that much work).

A pencil? Seriously? This probably sounds like gratuitous Amazon affiliate click-bait, but honestly… it’s cool. I had the Pentel Kerry sitting in my “saved for later” shopping cart for about 3 years (after reading about it on BoingBoing, I think), then decided during a wild caffeine buzz to make the $12 purchase.

I didn’t really expect much other than, well, a mechanical pencil, but it’s actually amazing… and I suppose I should not have been surprised to discover that the world of such contraptions includes yet another obsessive community that analyzes them in exhaustive detail. This one has a very good review on Dave’s Mechanical Pencil blog, which pretty well reinforces my own observations.

The best thing I can say about this is that unlike every other writing implement (except for my beloved retractable-point Sharpie), this actually has a special spot in my tool cabinet… along with a stash of .5mm lead and erasers. When I get it out and snick the cap into writing mode, something changes and I draw better. When I’m done, I actually put it away. I’m not really sure how, but they did something right to make this a tool instead of just a pencil. Not bad for twelve bucks!

Cheers from the Nomadhouse,
Steve