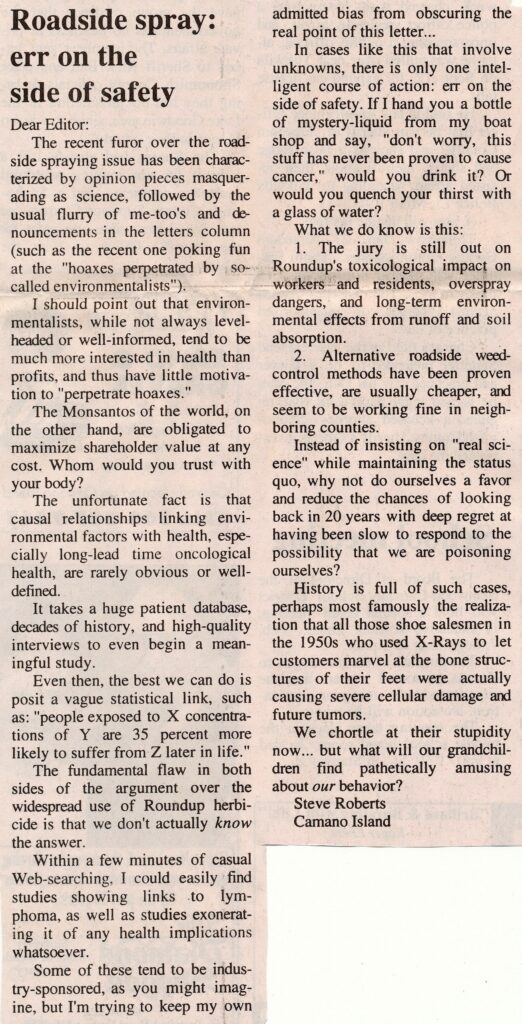 During the 12 years I spent in the woods of Camano Island, I took on a few essential battles. The one about roadside spraying was fiendish, and this letter was an attempt to depolarize a bit and get people to approach the subject with caution regardless of their political affiliation.

The recent furor over the roadside spraying issue has been characterized by opinion pieces masquerading as science, followed by the usual flurry of me-too’s and denouncements in the letters column (such as the recent one poking fun at the “hoaxes perpetrated by so-called environmentalists”).

I should point out that environmentalists, while not always level headed or well-informed, tend to be much more interested in health than profits, and thus have little motivation to “perpetrate hoaxes.”

The Monsantos of the world, on the other hand, are obligated to maximize shareholder value at any cost. Whom would you trust with your body?

The unfortunate fact is that causal relationships linking environmental factors with health, especially long-lead time oncological health, are rarely obvious or well-defined. It takes a huge patient database, decades of history, and high-quality interviews to even begin a meaningful study.

Even then, the best we can do is posit a vague statistical link, such as: “people exposed to X concentrations of Y are 35 percent more likely to suffer from Z later in life.” The fundamental flaw in both sides of the argument over the widespread use of Roundup herbicide is that we don’t actually know the answer.

Within a few minutes of casual web-searching, I could easily find studies showing links to lymphoma, as well as studies exonerating it of any health implications whatsoever.

Some of these tend to be industry-sponsored, as you might imagine, but I’m trying to keep my own admitted bias from obscuring the real point of this letter…

In cases like this that involve unknowns, there is only one intelligent course of action: err on the side of safety. If I hand you a bottle of mystery-liquid from my boat shop and say, “don’t worry, this stuff has never been proven to cause cancer,” would you drink it? Or would you quench your thirst with a glass of water?

What we do know is this:

Instead of insisting on “real science” while maintaining the status quo, why not do ourselves a favor and reduce the chances of looking back in 20 years with deep regret at having been slow to respond to the possibility that we are poisoning ourselves?

History is full of such cases, perhaps most famously the realization that all those shoe salesmen in the 1950s who used X-Rays to let customers marvel at the bone structures of their feet were actually causing severe cellular damage and future tumors.

We chortle at their stupidity now… but what will our grandchildren find pathetically amusing about our behavior?