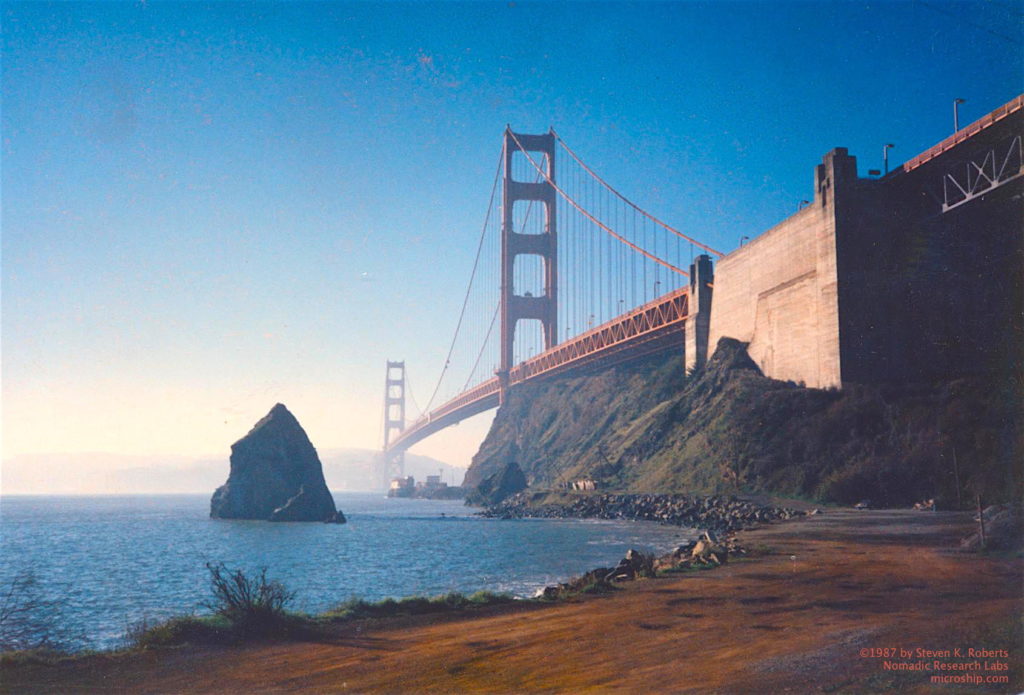 It was a crisp morning, foggy enough to romantically mute the distant San Francisco skyline, cool enough to make the ride exhilarating, early enough to eliminate any sense of hurry. Perfect conditions for a float across the bay and the long trek to Silicon Valley. We arrived at the Sausalito ferry terminal in the thick of the commuting throng, and wrestled our machines up the ramp and onto this small pedestrians-only boat. Ah… made it, just in time. I nodded pleasantly around at the startled crowd and reached over to switch off the bike’s control system.

“Park over there,” ordered a brusque crewman. “This is the passenger area.” He pointed down a narrow aisle.

“Will we be disembarking through that same door?”

“No, you get off from the upper deck. The stairs are around the corner.” He busied himself with preparations for launch — as the rumbling beneath our feet rose to a low growl and the steel ramp, our only escape, grated as it began to slide on the dock.

“Wait!” I shouted. I sprinted around the small vessel, quickly determining that the stairs were absolutely impassable. “We have to get off!” The mooring lines were already dangling in the water, but I began backing my machine toward the door as one of the commuters helpfully grabbed my antennae to keep them from snagging on the low ceiling.

Somehow the commotion reached the captain, and the boat stood impatiently as we backed down the narrow gangway. The moment Maggie’s front wheel hit the dock, they roared off to San Francisco — leaving us standing breathless in the mist. This hadn’t been the plan at all. Ah well, there’s still the Golden Gate Bridge…

After grappling with another minor obstacle (someone had chained the gate behind us on the loading ramp), we consulted our handy “Marin County Bikeways” map. Following it carefully, we found our way through Sausalito and Fort Baker, down to the waterline, and then panted furiously up, up to the west sidewalk’s bicycle entrance. Padlocked.

Grr. We kept climbing and soon reached the main gate. It was locked too, of course. The sidewalk was under construction, and the traffic separating us from the east side was an angry, fuming blur of bumper-to-bumper commuters — quite impassable.

Up a hill. Down a hill. Under 101 and up a hill, through a few hundred yards of glass-strewn gravel, and into the tourist area. Ah, bike route signs… I started down the ramp and was immediately stuck again — in a turn too tight for my 8-foot machine. Grumbling my sudden empathy for people in wheelchairs, I lifted the rear end around and made it onto the east sidewalk at last… yielding a smooth, delightful cruise all the way across the Bay.

This 50-year-old bridge is pure poetry: technology on a scale that mystifies, grace that belies the violence of its construction. Far below, seagulls sideslipped across the rippled water as from the waves towered this sculpture of steel, this thing rooted solidly in the sea yet soaring high above it like a skyscraper-based web spun through an inter-species joint venture of spider and engineer.

Onward. San Francisco was easy: Lincoln Boulevard, the Presidio, Golden Gate Park, the spray of surf, the oceanfront loiterers in their cars eating, reading, staring… Past it all we went, dodging glass, cracked pavement blurring under skinny wheels, the City’s periphery gliding by like the beginning of a movie.

Near Lake Merced, I half-noticed a woman staring at me as she passed in her nondescript green Oldsmobile. Intersection, red light. The little blue car, poised between lanes while waiting to turn left, didn’t have a chance. In slow-motion I watched it happen: the woman’s shocked recognition of unavoidable collision, the retired couple’s panic in that last moment before impact, the flying debris, the ruthless crunch of destruction, the small car lifting onto two wheels and then dropping again as the gray heads jerk right, then left. The woman getting out, ashen, frightened; the old couple, emerging more slowly, taking inventory. The slow boil of anger… hot words… gawkers in other lanes slowing, risking another accident in their urgent desire to see some property damage — or hey, maybe even blood!

I stopped and scanned the 2-meter band for an active repeater. “This is KA8OVA, bicycle mobile. I’ve just witnessed a 2-car accident on 35 at John Muir, and I need to make a police call.” Once that was taken care of, I sat out of the way and waited.

The Oldsmobile woman walked over to me and attempted, in halting English, to explain. “No insurance,” she said. It’s OK, I said, the police are coming. She backed off, wide-eyed, then jumped in her car and gunned the engine — squealing a U-turn northbound and almost causing another accident in the process. I quickly recorded her license number.

The old couple walked over. Helluva way to start a vacation. They were fresh from Philadelphia, and had just rented this car at the airport half an hour ago to take the 49-mile scenic drive. Now it sat with a flat tire, shattered rear door, crushed fender, various parts in the street getting tiddlywinked this way and that by passing traffic. “I don’t think that woman even had a driver’s license,” the lady said. “I couldn’t get her to show me anything.” I told her the tag number, sold her a book, and then kept them company until a bored cop finally arrived a half-hour later.

Onward again. Skyline Drive, Route 35, uphill through the cookie-cutter tackiness of Daly City where thousands of identical houses offer picture-window vistas down through brown smog at thousands of identical houses. Onward. But as the road narrowed, an alternative emerged: a bike path. It began normally, petered out for a while, then suddenly became the stunning Sawyer Camp Road — a miniature highway, a bonanza just for us, a route scaled so perfectly to bicycles that I had the recurring illusion of being a highballing 18-wheeler. Dreamlike, it went on for miles, lazily curving through the woods and along the thirsty reservoir, offering vistas of water, wood, and joggers as it brought us ever closer to Silicon Valley. “Someday,” I mused, “I’m going to run for President, dismantle the entire defense establishment, and build a network of bicycle paths around the country, just like this…”

The end of that day signaled the beginning of a new phase. A layover now begins, based in the Palo Alto area — a chance to do major bike surgery, create a speaking business, write a few things, do a Computing Across America video, start a magazine, and, er, relax occasionally. First stop, Mountain View, home of network friends Tom and Barb.

It’s hard to write about real people, especially close friends. What will they think? How can I adequately capture their subtlety and intelligence without taping every conversation? Barb’s keen punny rhyming wit, Tom’s finely honed and brutally honest insights. Barb’s online wizardry, Tom’s business analysis. They are a close part of my electronic family…

Barbara and I met on CompuServe during my first trip — when she was doing online searching in Berkeley and I was pedaling through Florida. Within days, we developed a sizzling relationship, inevitably escalating into a rendezvous. It’s all described in the book… our romance escalating into a beach fantasy in Key West, the “ultimate blind date.”

But she went back to reality and I went back to the road, and it was only a matter of time before I was up to my old tricks and she was falling in love with someone more tangible — Tom. He and I began exchanging electronic mail during the slow gestation of my book, and soon our correspondence quite outstripped the one that had started it all. He critiqued every chapter, urged me through the rough spots, rewarded the odd moments of brilliance, and became firmly established as my best friend long before we met.

Since then, the two of them have shared in my every activity, following me over to GEnie when I moved from CompuServe and helping with the psychological management of the strange ad-hocracy that is this nomadic business. It’s always a major treat to see them in person, of course, and we’ve been here a week.

Lively minds. Barbara now designs operator interfaces for a living, but her latest passion is writing musicals. She treated us to a recital of two weeks’ work: 13 songs, each uniquely flavored, woven into a revue slated for performance sometime this spring. “Rhyming is one of the human mind’s highest aspirations,” she said in response to lavish praise.

“I think, therefore iamb,” I replied.

Tom’s business is corporate intelligence, a marriage of old-fashioned sleuthing and the latest in information science. His career has been one of generalism, encompassing everything from social research to electronic product design, and the resulting “street wisdom” makes him a formidable force. I’m glad he’s on my side. It’s been a week of strategy sessions, brainstorms, punfests, and epicurean delights.

(We’re passing around a $25 Cognac Leyrat and lacing it with Mandarine Napoleon. I remark on the extravagance. “You gotta belch something,” he says.)

There have been a few excursions this week, of course, for we’re in a Mecca of technology. Thinking to touch it’s very headwaters, I cruised Stanford — a campus familiar from years of Artificial Intelligence conferences, a place that attracts me as much with its reputation as with its legions of beautiful women. It was a sunny Sunday, and they lay about everywhere in blatant repudiation of February.

But something was strange, something I noticed a year (but not ten years) before. Few people smiled. There were frisbees and volleyballs afloat here and there, but the normal Winnebiko-spawned grins were notably absent. A few stares. A couple of nods. No spoken greetings, no requests to stop, no questions, no curiosity. In a place known for its research wizardry, this is a bit confusing. They can’t all be jaded.

Subsequent discussion yielded a theory. These are yuppies-in-training, learning to live with heavy stress on a daily basis. Undergraduate tuition and board costs over $16,000 a year here, and Stanford students fully expect to graduate up to their assets in debt. This is not a relaxed bastion of intellectual exploration, it’s a place of fierce competition, unrelenting pressure, and heavy parental expectations. By the time most students graduate, they are well-conditioned to the intense life of fast-track corporate America. Relax? On Sunday?

Otherwise things are shaping up just fine, which is the whole point of this layover. We’ll be moving this week to a place with lots of workspace, building some horizontal surfaces, and attacking all projects at once — from new bike gizmology to new ways of doing business that are designed to render cash flow a bit less random. For despite all the glory, fun, media, and new friends, there is still that basic problem…

Posted in Miles with Maggie
← Sonomarin SnapshotsTaking Care of Business →