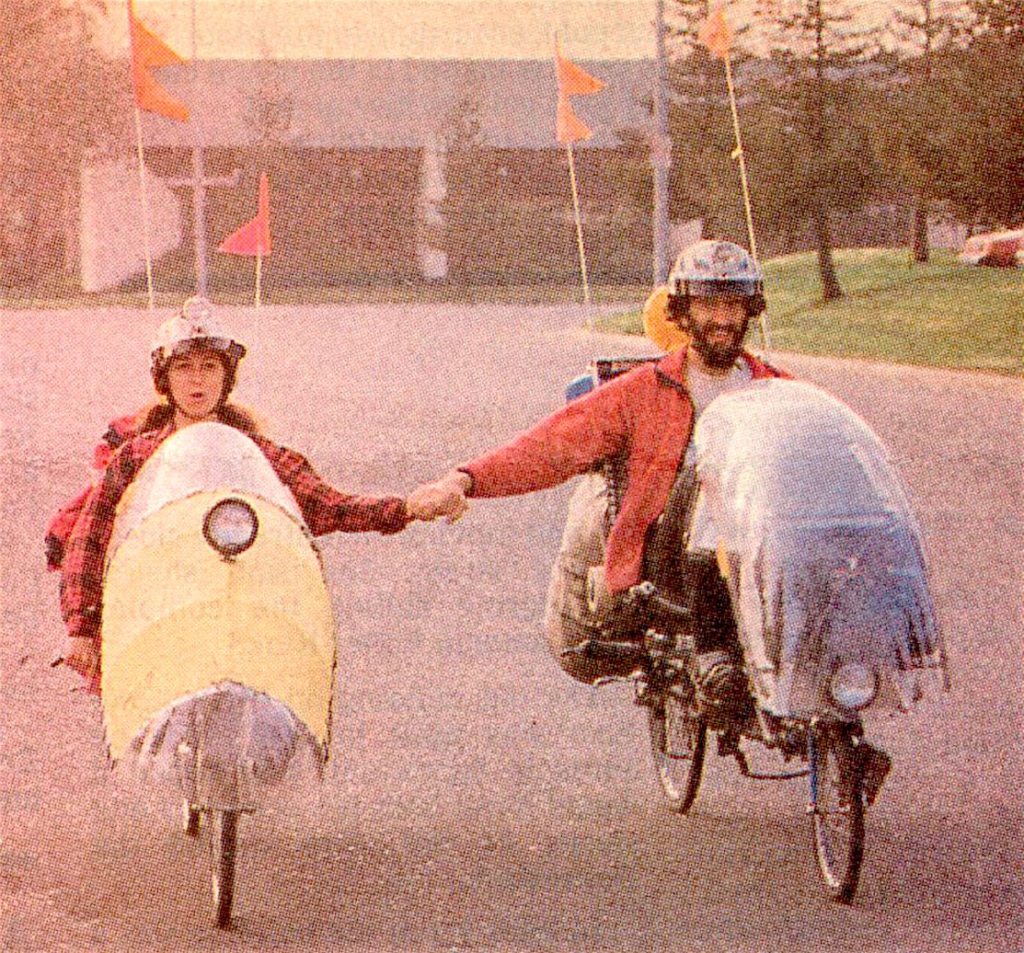 Suddenly there begins another mad macrophase. The changes struck with our last wild descent, an abrupt transition at the dusky end of an exhausting 50-mile day. BMW’s and solar-heated redwood hot tubs. Vanity plates and chocolatiers. Evidence everywhere of treats turned de rigueur, of expensive toys, of the Good Life. We’re in (where else?) Marin County.

As I write in this wooded suburban oasis, a dog named Stony goes mad with frustration (her tennis ball is imprisoned beneath my Birkenstocks). Two little girls, flawless, frolic about their two-story playhouse, intent on adult-simulation. Birds chirp in gentle cacophony, the coffee smells exotic, and a distant murmur from Sir Francis Drake is the only clue that I’m not really far out in some idealized image of “country.” We’ve been living a sweet laziness for the last week: plenty of space, good food, redwood sauna, separate phone line, bright kids, music, foamy fragrant margaritas, and yet another new circle of friends.

My foot healed, more or less, in Healdsburg. I still gimp about on my nifty collapsible aluminum cane, but I can ride OK — and it took three pedaling days to make it to the beginning of our Bay Area adventure.

First: a flat, easy trek to Santa Rosa. I visited Lemo, one of my equipment sponsors (they make ultra-high-quality water-resistant connectors), and now have a 12-pin medical-grade interconnect on my brain interface unit. While there, we did the obligatory interviews, yielding a nice full-color story in the Press-Democrat and a mediocre TV spot. But the article, in this New-York-Times-owned paper, triggered a succession of radio mini- features across the country — significantly simplifying my recent quest for more sponsors. (This is such a strange business.)

Second: a mildly hilly, picturesque cruise to Sebastopol, on a day so beautiful that we almost pressed on past our new host and into the rural hills. But we stopped, yielding a delightful afternoon of bike work and bike talk at the world headquarters of Ibis Cycles. Quality stuff here: these folks build TIG-welded Chrome-Moly mountain and “trials” bikes, having discovered that the temperatures reached through traditional brazing lead to eventual frame failures in the brutal off-road environment that attracts the fat-tire set. We hung around for a day, watching their new house get built, risking my ankle trying to balance a trials bike, and making the obligatory pizza run.

Third: a big one. 50 miles of up and down — up to the sky and down to Petaluma, then back up, past countless Arabian ranches, down past the reservoir, past Nicasio, and finally up over one last hill to the sudden profusion of rush hour imports and the unmistakable signs of City instead of Town. Through it all, climb after climb, the ankle grumbled and complained, never quite disabling but always very much there. Robbed of my natural rhythm and doing most of the work with my right leg, I tired easily — arriving almost delirious at the home of our Kentfield host.

San Francisco, the City, the traffic, the frenzy of the next phase… all are very close. No hurry. This home, complete with 6-and 9-year-old girls, has been a place to gather strength, play telephone tag, play tickle-monster, and line up business meetings. We babysat, dogsat, and sat around. We have planned grand video productions and rapped into the night. We have thrown the tennis ball for Stony, gotten our host onto GEnie, and taken lazy afternoon saunas. And, most recently, we rode over to the girls’ school and presented ourselves as the ultimate show-n-tell to about 300 kids, grades K-5.

They filed in orderly and agape, floor-sitting in rows on the other side of a masking tape boundary. I spoke of travel and freedom, letting the bike’s synthesizer speak for itself. “I tried growing up,” I concluded, “but it wasn’t any fun at all. Why not enjoy your whole life? Are there any questions?”

A hundred hands shot up. I chose randomly.

“Name some of the people you’ve met,” said one little girl. Um… Jim, Laura, Jackie, Jerry, Dave, Duane, Ken, Michael, and Dave. And Rosie. And another Dave. And…

“Where do you keep your toothbrush? How many clothes do you have? Where’s your money? How do you two get along?” (Fine, we met on Valentine’s Day.) Giggles.

“What if you come to a river and there isn’t any bridge? What happens if it falls in the river? How many hours does it take to go across the United States?”

“Where did you get all the stuff to make that? Does it play video games? Is your stereo a Sony? Do you ever not know what state you’re in?”

And this one, from a third-grader whose parents are divorcing: “How long would it take a dad and a boy to build one of those together?”

Every time I moved the bike — or opened the console to display the circuitry — the room erupted in a chorus of ooooohhhh! One young fellow, clearly in a state of rapture, stretched across the masking tape line and gazed at the expanse of chips and cabling. Eyes wide, he cried, “Wow, it looks like… the whole world!”

When it was over and most were on their way back to a more traditional education, someone had an idea. “Um, can I have your autograph?” asked the small voice from somewhere below a proffered scrap of paper and a chewed #2. “Sure,” I said expansively, not realizing what I was getting into. Within minutes the room was breezy with the flutter of old library catalog cards, notebook pages, and paper scraps — all waving urgently in my face in a total abandonment of the order that had prevailed a moment before. I haven’t signed my name so much since buying that house in suburbia, way back in those dark years…

Lifestyle sampler. We clambered about Mount Tamalpais with 6-year-old Shannon, holding her hands, collecting manzanita berries and bits of serpentine, feeling very much like parents. That night, we tucked her and Corey in, telling them stories until eyelids grew heavy. Life has become a multidimensional catalog of realities, a wish book of cultural options.

That oughta keep me busy for a while.