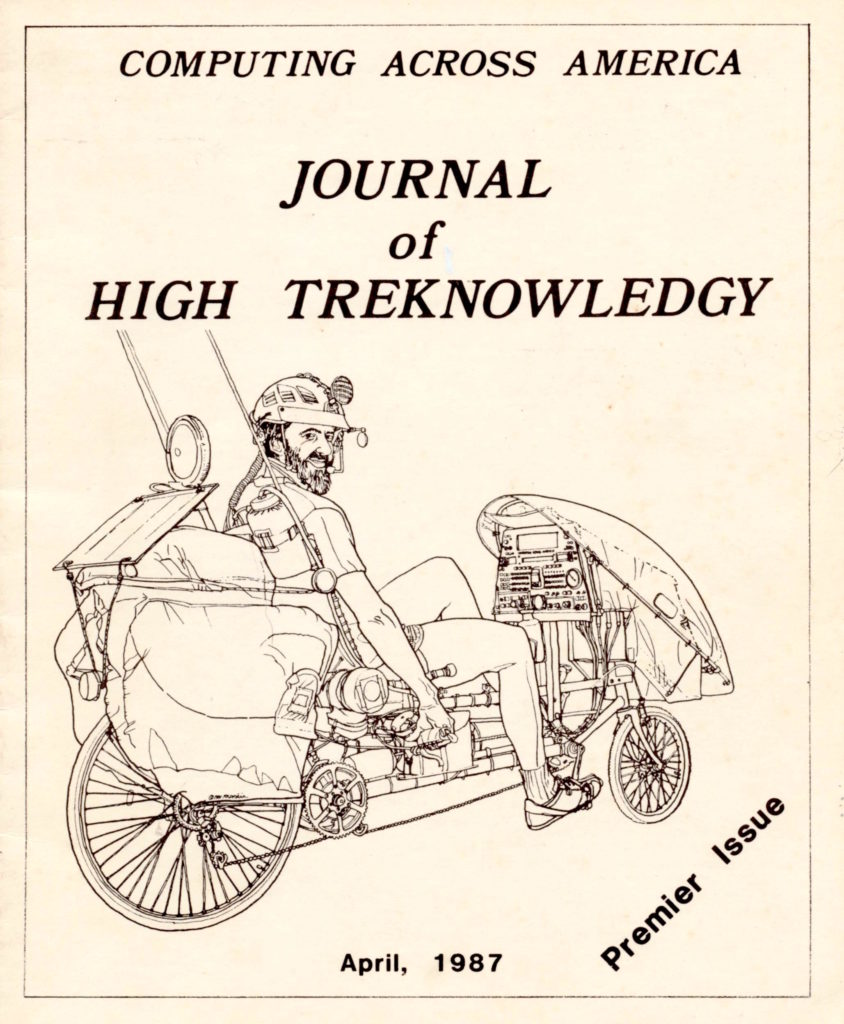 Sitting at a desk in a cluttered room on a sunny California day is not unlike being chronically married and walking past a nude beach. Through this wide suburban window the sky is blue, the trees are green, and the shadows are crisp. It’s breezy and warm. People are strolling by in shorts, fer chrissake, and some even torture me by whizzing past on sleek 18-speeds — their buns shaped by lycra tights, calves standing proud in that fine sheen of early-season sweat. Sigh.

I suppose I always have the option; I could just pedal away. No court restraining order has confined me to this Palo Alto house at the hormone-happy onset of virtual springtime. But I’m trapped: the list of things to do is so overwhelming that I spend most of my time poring over it, abstracting it into categories and priorities. Suddenly the journey is project instead of lifestyle — I’m spread over three desks trying to start a mini-magazine, script a video, kick off a new column, finish (well, um, start) some overdue articles, and dramatically enhance the bike communication and control system. That’s the plan anyway.

But Time, as always, slips through my grasp, teasing me with its touch, taunting me and torturing me as it dances just out of reach. (Yes… you’re not the only one.) No matter how much I plan, it tricks me: darkness before the afternoon, sleepytime before night, interruptions from self, friends, or cosmos whenever a moment’s concentration threatens to yield progress.

Procrastination followed by despair, that’s the freelance life. The list, that great overblown impresario of personal time management, is at once refuge and tyrant, comforter and accuser. I add to it with satisfaction, peruse it with nervousness, and cross things out with malicious glee. (Sometimes, er, I even add items for that purpose alone: Saturday I sent a card to Emily, then wrote “card to Emily” on the TO-DO list, switched pens, marked it off, and took a well-deserved break with a smug air of self-congratulation.)

This is highly pathological behavior, even for a high technomad.

It has been an interesting week, all the overhead of getting pseudo-settled aside. Ray Rolls was here yesterday from Chico, bearing an armload of Vacaville nut breads and urging me past the muddle of startup on the magazine project. This publication-to-be, in short, is a print version of these weekly tales for all those poor unfortunates out there who don’t have online access. Tentatively called The Journal of High Treknowledgy, it will be a monthly compilation of CAA highlights, feature articles, guest editorials, and, for all I know, recipes and cartoons. You can now turn your offline friends on to my ramblings by buying them gift subscriptions.

But hey. This trip isn’t all adrenaline, torn ligaments, logging trucks, whimsical host analysis, rubber-band wars, and loony street people. It’s work, too, hard work — and I might as well share the reality behind the fantasy. (After all, you might otherwise think I play for a living.)

So. This and the journal are only part of it. I’m starting another “profit center” that fits in perfectly: The Computing Across America Traveling Circuits. That’s right — a road show. After a few years of observing the near-obsessive fascination that my techno-bike spawns across the land, it finally sunk in. Of course — charge admission! All I have to do is show up in a strange town, roll the bike onto stage, tell a few funny stories about life Out There, and answer questions. Sounds easy… though the difficulties include timing, advance arrangement of venue, advertising, and so on.

And there’s more (isn’t bicycle touring fun?). I’m trying to make a regular column out of the myriad lessons of doing business on the road (“Breaking the Chains”), and am still hustling random freelance articles. And yes, I’m still grappling with a world-class publishing nightmare on the book — oh, didn’t I tell you? No? Well, if you’re not already cynical about the publishing industry, prepare to become so…

The Computing Across America book, written about my first 10K miles, was begun back in 1984. It was a major event: the contract with my publisher had carried a hefty advance, far and away my biggest ever. But I got caught up in a whirlwind of editorial musical chairs reminiscent of Westlake’s A Likely Story: Editor One, after 3 exuberant months of long phone conversations and dreams, jumped ship to join an investment banking firm. I missed her. Editor Two didn’t seem to know much about anything, but it didn’t matter — he disappeared soon into another division of the company. Editor Three, a man with solid industry experience, hung in there long enough to receive my manuscript.

“I love it!” he said. Releasing the third quarter of the advance, he requested a general tightening of flabby passages and added, “It’s going to be terrific!” Considering this tantamount to acceptance, I went gleefully to work… while he left to join a new publishing company.

Editor Four received the manuscript and sat on it for two months. One day in the summer of 1985, I called him. “Uh, Steve Roberts? Let’s see… hmm… that’s the bicycle book, right? Ah, gee, Steve, I’m probably not the best editor for this. I’m not really into travel books.” A panicked phone survey revealed that there had been a complete turnover since the original contract, and that nobody at the big New York house knew (or cared) who I was. They soon invoked the ubiquitous “unsuitability clause,” a particularly nasty trick of publisher-designed legalese that allows them, in effect, to unilaterally kill a project anytime up to the moment of formal acceptance. For no reason at all.

Oh, where was my agent through all this? Quiet and in the background, that’s where. He didn’t want to make any enemies over there, since there were several “important” projects of his under consideration. He even chewed me out for making waves.

I fired the agent and licked my wounds — staring with increasing dismay at the finished 620-page manuscript on my desk, the product of some 2,200 hours’ work.

Months passed. The book remained an irritant, a frequent source of helpless rage. I began hearing other publishing industry horror stories, but they failed to make me feel better. Finally, in desperation, I turned to a small publisher in New Jersey with which I had done some business over the years (articles and speeches). Ahhh, now we’re talking: a company on a human scale. Within a month I had a verbal agreement, a new and delightful editor, and a much healthier outlook on life.

That was well over a year ago. The new typesetting machine took a few months to arrive and a few more months to get working, other projects take up most of their time, and there’s still no written contract. The editing was fine and the book will actually happen (in June, they tell me, only 8 months after their original predictions), but in the meantime I’m out here doing a high-profile media tour for no reason other than that it’s just… what I do.

The lesson in all this? No publishing venture is straightforward and predictable.

This could go on all day, but you probably didn’t come in here for a lesson in nomadic business survival. I can hardly invent adventure, however, when this week’s real story has more to do with the architecture of the whole loony enterprise. So where are we now? In a house in Palo Alto, owned by a wizard in ultrasonic transducer design and signal analysis who also shares space with a pretty blonde artist and a black lab named Maggie. We’re actually “tenants,” bartering some carefully targeted marketing copy for space, good music, and an occasional splash in the hot tub.

Oh yes, I did have one adventure this week — an intriguing glimpse into another layer of Dataspace.

I entered through Portal, a new host system based in Cupertino. The first delight was the cursor control: I cranked up the VT100 emulator in my HP Portable PLUS and the whole experience of being online changed completely. Screens were cleanly formatted, with minor changes in menus and directories happening in a blink. I poked about happily, forgetting I was on a dial-up service. Nothing like speed…

The system supports electronic mail and conferencing, with no services like CAA or Reversi or Easy Saabre. But the architecture is elegant in the extreme, including a sort of personalized electronic clipping service that lets a user tailor the system to specific interests.

The real magic, though, comes from the gateways. Portal is one of thousands of systems on the Internet — a global network designed to link diverse “domains” into a dynamically mapped, standardized meta-network. In other words, you can send mail all over the place: into corporate or academic email systems, defense establishments, private systems across the sea, and so on. Naturally, this extends to conferencing, and the dialogues in progress on the network are interesting enough for me to add this complex environment to my growing Dataspace neighborhood.

What we need to do now <conspiratorial wink> is get Portal and GEnie linked through a gateway. CompuServe made headlines with their recent MCI hookup… here’s a chance to one-up the competition and bring the world another step closer to the truly useful objective of universally linked networks. The present condition — isolated communities on competing monolithic systems — should eventually give way to complete network freedom, wherein any modem owner could communicate with any other. The various major hosts would continue to thrive, of course, offering competing services with different features and flavors… but mail could go anywhere.

Push for it, friends — lest we end up with just as much electronic nationalism as that of the geophysical variety. (It’s already starting, you know.)