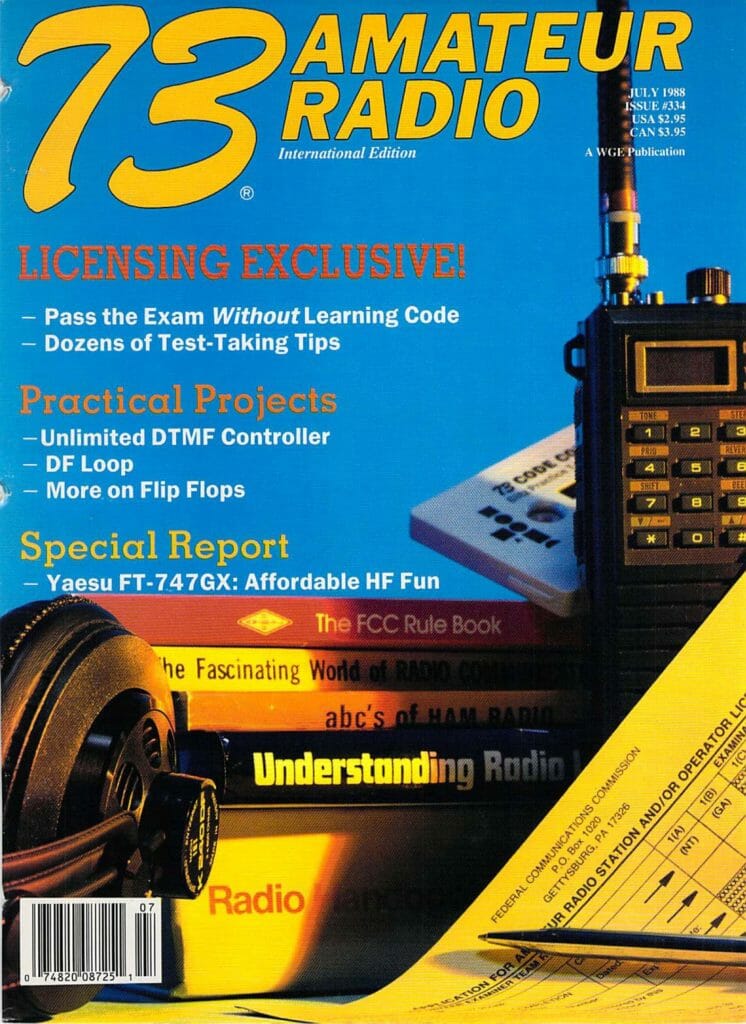 Part 6 in the Tech Nomad series

Sometimes I have no choice: I must turn my back on the Winnebiko and trust the public to leave it alone. And yes — to answer a frequent question — it usually makes me nervous. For as somebody wrote in a bicycle magazine once, “The best lock is the human eye.”

Those who drive around with thousands of dollars in ham radio equipment know exactly what I mean: you go downtown, park, have a flash of paranoia, then either stuff everything of value into a suitcase or get a hotel room with a view of the parking lot… probably spending the night in half-sleep, jumping up at every sound to see if some criminal is about to become an unlicensed ham.

My problem is even worse. The bike not only has no locks (except for a cable, which is essentially useless), but it also attracts curious people the way a pussycat in heat lures cruising toms. So far. I’ve been lucky. A few drunks have sat on it and a few kids have flipped console switches, but nobody has actually tried to STEAL it. Perhaps those so inclined have been stopped by the vague realization that they’d never get very far. The average thief would either fall over at the first traffic light or be so overwhelmed by questions from onlookers that he’d give up and go back to anonymous purse-snatching. 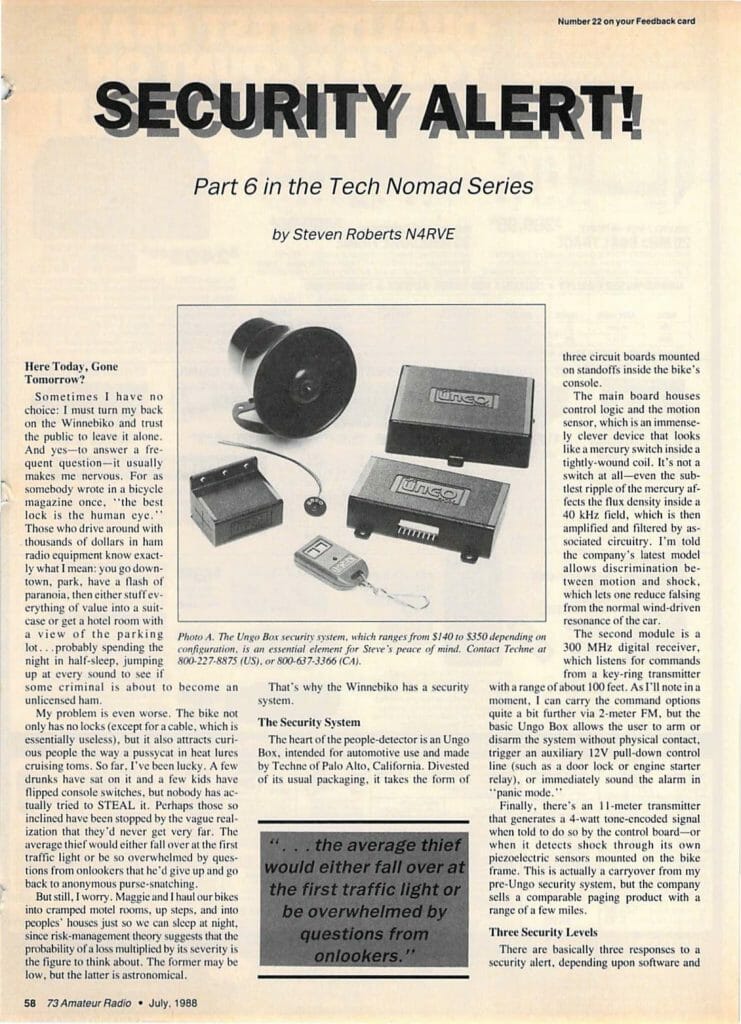 But still. I worry. Maggie and I haul our bikes into cramped motel rooms, up steps, and into peoples’ houses just so we can sleep at night, since risk-management theory suggests that the probability of a loss multiplied by its severity is the figure to think about. The former may be low, but the latter is astronomical.

That’s why the Winnebiko has a security system.

The heart of the people-detector is an Ungo Box, intended for automotive use and made by Techne of Palo Alto, California. Divested of its usual packaging, it takes the form of three circuit boards mounted on standoffs inside the bike’s console.

The main board houses control logic and the motion sensor, which is an immensely clever device that looks like a mercury switch inside a tightly-wound coil. It’s not a switch at all — even the subtlest ripple of the mercury affects the flux density inside a 40 kHz field, which is then amplified and filtered by associated circuitry. I’m told the company’s latest model allows discrimination between motion and shock, which lets one reduce falsing from the normal wind-driven resonance of the car.

The second module is a 300 MHz digital receiver, which listens for commands from a key-ring transmitter with a range of about 100 feet. As I’ll note in a moment. I can carry the command options quite a bit further via 2-meter FM, but the basic Ungo Box allows the user to arm or disarm the system without physical contact, trigger an auxiliary 12V pull-down control line (such as a door lock or engine starter relay), or immediately sound the alarm in “panic mode.”

Finally, there’s an 11-meter transmitter that generates a 4-watt tone-encoded signal when told to do so by the control board — or when it detects shock through its own piezoelectric sensors mounted on the bike frame. This is actually a carryover from my pre-Ungo security system, but the company sells a comparable paging product with a range of a few miles.

There are basically three responses to a security alert, depending upon software and the position of a hidden switch. The usual mode is page-only: the machine beeps me when someone touches it. Normally I leave the siren off. Its 130 dB wail is enough to seriously alienate anyone nearby (especially if it takes me a while to drop my fork, extract pasta from my beard, dodge waiters and tables, wait for an elevator, and sprint out the door to disarm the thing). But sometimes the siren’s acknowledging chirp upon being armed is a good deterrent — that, along with a few blinking lights labeled “security status,” lets people know that they should look but not touch.

If the bicycle-control processor is alive, then an additional level of “protection” is added, the efficacy of which is entirely dependent upon the personalities involved. A few weeks ago, a fiftyish woman had the gall to sit on the seat, whereupon the bike made a loud gunshot sound and firmly said: “Please do not touch me!” She leapt up, startled and embarrassed, and apologized to it. A heavily made-up friend of hers with a cigarette walked over to see what all the fuss was about, and I couldn’t resist: I transmitted a touch-tone command that caused the bike to say: “This is a no-smoking area.” The two of them guiltily backed off about ten feet, speculated awhile, shook their heads in bewilderment, and left… glancing a few times over their shoulders to make sure it wasn’t rolling after them with evil intent.

Unfortunately, it doesn’t always work that way. Some people keep touching the bike over and over to hear the Votrax synthesizer talk, realizing quite accurately that there’s no bite in the system’s level-two bark: “Do not touch, or you will be vaporized by a laser beam.” Children, depending upon their sophistication, either respond with delighted glee or flee in terror. “I just wanna buy the part that gets rid of the kids,” quipped a Florida ham upon witnessing the latter response at the Orlando Hamcation (March 11-13, 1988).

The nice thing about a motion sensor is that it responds to the movement of anything physically connected to it. As such, my trailer is just as protected as the bike — and until we installed an Ungo remote sensor on Maggie’s machine, all we had to do was park it in contact with mine.

OK. Getting beeped when the bike is touched is fine, because it makes it possible to turn my hack on the damn thing and think about something else. But the problem is that MOST alarms turn out to he caused by someone wiggling the handlebars (“Oh look, here’s how he steers it!”), stroking the seat fabric, or finger-drawing WASH ME in the road dust of my fairing. Neither event is serious enough to warrant columnist interruptus. And the last thing I want to do in the middle of a breakfast of champignons is stand on the sidewalk and try to explain, before the mushroom omelette cools, what all the switches do.

That was the motivation behind the 2-meter touch-tone link between an HT and the bike.

I have referred earlier in this series to remote control of the speech synthesizer — basically a means of selecting one of a stored repertoire of pre-programmed speech strings via a 20C90 on the 68HC11 I/O bus. Other commands allow direct control of the siren, the flasher, and the security system itself — and originally, I set it up to allow (n) seconds of local audio to be transmitted back to me on demand. The trouble with that, however, is that the language of bystanders does not necessarily adhere to the stylistic standards set forth in Part 97 of the FCC regs… specifically those having to do with obscenity. Telling the bike to transmit what it hears on 2-meter simplex is more than a little risky.

So I’m on the lookout now for a good deal on a pair of 49 MHz transceivers, one of which can be PTT’d by remote control and the other of which will live in my “off-bike” package. With the addition of a second packet TNC attached to my laptop computer, I’ll be able lo sit in a restaurant and carry on a very convincing “live” conversation via the synthesizer. Frivolous?

Not at all. Arthur C. Clarke once noted that “any sufficiently advanced technology is indistinguishable from magic.” When the objective is security, a bit of trickery can go a long way toward keeping those of low motives intimidated. And during all those Other times — the times of electronic flirting and teasing, intellect-filtering and friend-polling — well, it’s FUN. This is exactly what technology should be.

While on the subject of additions to the Winnebiko, by the way, I should comment on the effects of visiting such tech-meccas as the Dayton Hamvention, COMDEX, and CES. This is the stuff that fuels the bike, and I suspect it has a lot to do with your motivations in this hobby as well. There’s an adrenaline-like rush associated with wandering aisle after aisle of whiz-bang gizmology, especially when one recognizes that behind the sparkling exteriors of all those machines lie exquisite tools for talking, sharing, learning, scoring, playing, and whatever else it is people yearn to do with their free time. In my case, this all translates into wild dreams of the Winnebiko III…

The security system will continue to grow, with a special function that detects a change of latitude and longitude (via GPS and LORAN) without an appropriate password. This will trigger packet beaconing on all available channels, giving a security alert along with precise position data and local recording (with optional transmission) of captured audio.

The bicycle-mobile ham station grows rapidly as we wander from hamfest to hamfest on the frenzied Computing Across America media tour. Bob Heil’s 10-meter FM rig… an ATV transceiver on 450… an OSCAR station for Phase 3C… HF-mobile operation from the PV-covered trailer with a thicket of Hustler verticals and handlebar remote control… I just hope KA8ZYW will be willing to carry all my clothes and camping gear as the Winnebiko’s electronics continue to grow. (I’ll emphasize the job security.)

A navigation system based on the Geovision CD-ROM map database and a Macintosh presentation manager… with live satellite data yielding a zoomable “you are here” display on the console. The under-seat trackball will allow linkage to other databases and HyperCard stacks, allowing easy graphic reference to hospitality and business-reference data wherever I happen to be.

An 8-mm video system for both ATV and on-the-road production (with a potential joint venture in the entertainment industry). A DAT recorder. Lots of file space. Automatic surge-hydraulic brakes on the trailer. An adaptive and overridable automatic transmission, driven by torque and speed measurements. Retractable aerodynamic side curtains. Etcetera. But no motor! Gotta keep this cycling life pure.

Cheers from the road, and thanks to all who wandered by our booth at Dayton! Helluva show…