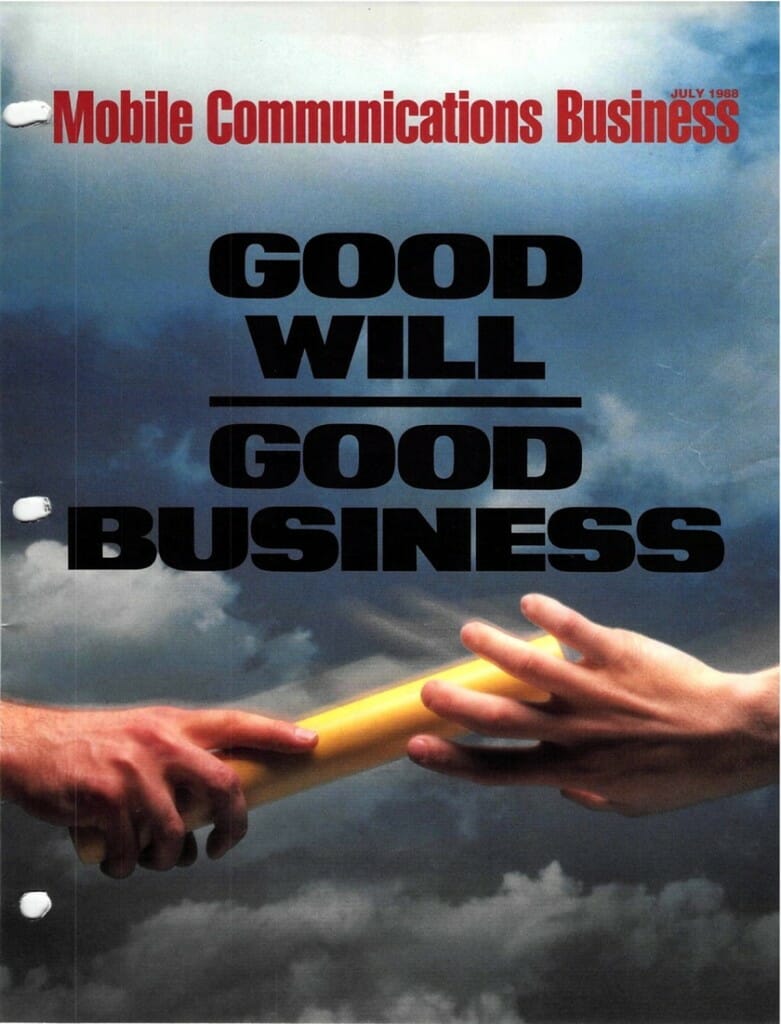 This is one of a flurry of cellular industry trade journal articles that popped out in 1988, covering the somewhat audacious and absurd addition of a 3-watt bag phone to the bike (at the cusp between the Winnebiko II and BEHEMOTH versions). If you’d like video from exactly this time, there is a piece on CNN that I’ve extracted from the mountain of old VHS tapes… it captures the essence of this stage of the project quite well. I always find it kind of amusing to go back and read how bizarre this was in the late eighties… for more on the nuts and bolts, I published a technically detailed description in Cellular Business a few months later.

Steve Roberts has only put 16,000 miles on his vehicle since 1983, even though he normally spends several hours a day most months at its controls. Low mileage for a fleet car used to conduct business, you say? Roberts’ “car” is an aerodynamically designed recumbent bicycle.

Pedaling around America sponsored by 63 companies that supply him and his entourage with equipment including laptop computers, helmet cable, online research facilities and solar panels, Roberts is a journalist who travels the country on a less-than-futuristic means of transportation to tout the computer age. He finds his way around large cities with an Etak mapping system and keeps in contact with the business world via RF communications — ham radio equipment that uses Hustler antennas, Plantronics headsets, Yaesu multimode transceivers and a soon-to-be-installed Oki Telecom cellular phone.

“I had considered having a phone before,” Roberts said, “and the only thing that stopped me was that the phones I had looked at were way too heavy and power-hungry. Also, roaming only recently has really come into being.”

Currently taking a break from two-wheeling around the nation, Roberts is in the process of having a new bike made from parts of the old one, and Oki Telecom will install the phone on the refurbished cycle. Besides the ease in which Roberts now will be able communicate on the road, he will be capable of transmitting copy via cellular in addition to hooking his facsimile machine to the phone to send and receive hard copy. Roberts also transmits and receives data via a packet-switched network.

Sometime during the next six months, Roberts will be on the road again. Armed with some newfound knowledge, he plans to be able to communicate and telecommunicate even in locations less than conducive to good transmission. To boost cellular transmit and receive power in fringe coverage areas, Roberts plans to attach a Larsen antenna on the phone to increase the gain.