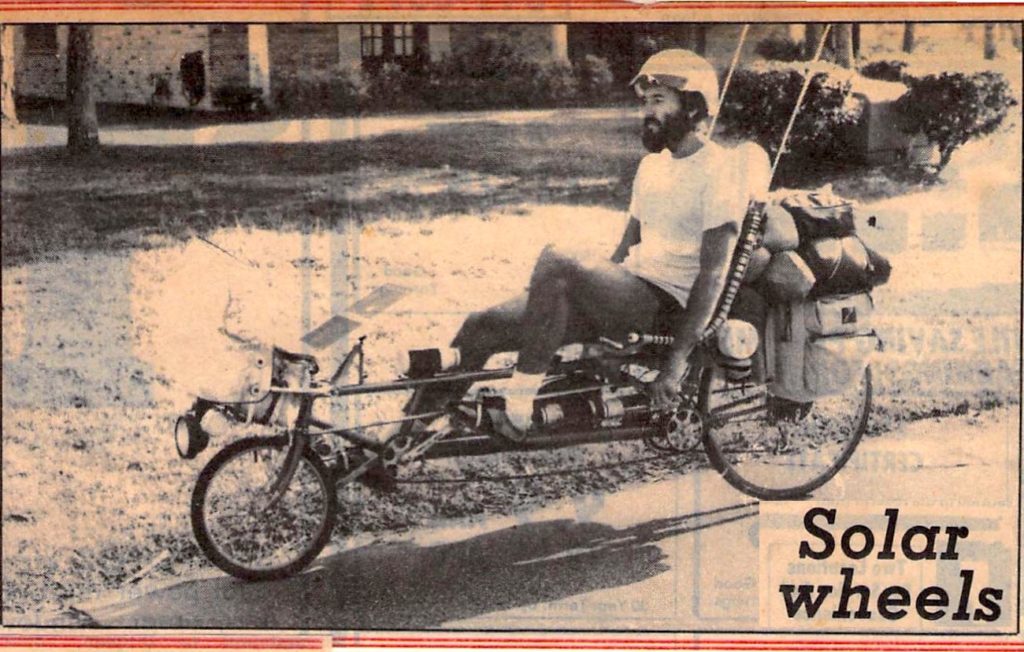 I had a most enjoyable visit in Slidell, Louisiana – including a visit to the National Weather Service center where my host worked. This led to a chapter in the book called “The Winds of Change.”  These two articles were published on the same day, and a longer one appeared earlier in the Slidell Daily Sentry-News. (Pub date adjusted slightly to fit the timeline; by the 13th, I was in Hammond). The first of the two short pieces, including the photo above by Carol Beck, was in the St. Tammany Times:

Bicycling around the world and writing of his adventures along the way is freelance writer Steven K. Roberts, an Ohio resident who has ridden this custom-built recumbent bicycle approximately 4,400 miles from Columbus, Ohio. The “Winnebiko.” as Roberts affectionately terms his invention, includes solar panels which convert the sun’s energy to power a battery pack, which runs the bike’s lights, security system. C.B. radio, horn, lights for tent and a mini-computer. Traveling at an average of 16 miles per hour, Roberts’ adventures en route to Slidell have included meeting up with convicts in the Maryland woods and sailing from Key West to Clearwater. Florida. “My life is now research for my magazine articles,” said Roberts. (Daily Times photo by Carol Beck)

This next one was in the Tammany Talk section of the Times Picayune / States-Item:

Roberts attracts a lot of attention on the highways because his bike is equipped with a webbed chair and the steering controls are under the seat.

The time is drawing near when lots of St. Tammany folks will be playing host to guests coming to the area for the World’s Fair.

But two Slidell households already have had visitors who won’t be easily forgotten.

Jean and David Smith’s Cross Gates home became a stopping point on a cross-country bicycle tour for Steven Roberts, a free-lance writer who carries a computer on his bike.

The Smiths formerly lived in Roberts’ hometown of Louisville, Ky. Jean, who teaches the gifted class at Slidell High, also taught in Louisville, and a former student gave Roberts their name.

Roberts brought his home and his office with him to the Smiths’ house. Both are contained on what he jokingly calls his “winnebiko,” a custom-designed 18-speed bike that is to take him and his computer around the United States and possibly into Europe over the next three years.

Roberts attracts a lot of attention on the highways because his bike is equipped with a webbed chair and the steering controls are under his seat, allowing him to almost lounge as he pedals. His bike also carries solar panels that power his lights.

He and David Smith, who works at the National Weather Service, found common ground in computers. Smith took his guest on a tour of the facility. Roberts has written three computer books and his TRS-80 is his link with publishers and friends.

The Smiths’ 15-year-old son, Lane, is also a computer buff, so the family plans to correspond with the traveler.

Computer buffs who subscribe to CompuServe can keep up with Roberts’ exploits by his identification sign-on of GOCAA. They can also send computer messages to him by using the number 70007,362.

The road doesn’t get lonely because of his computer friends, Roberts says.