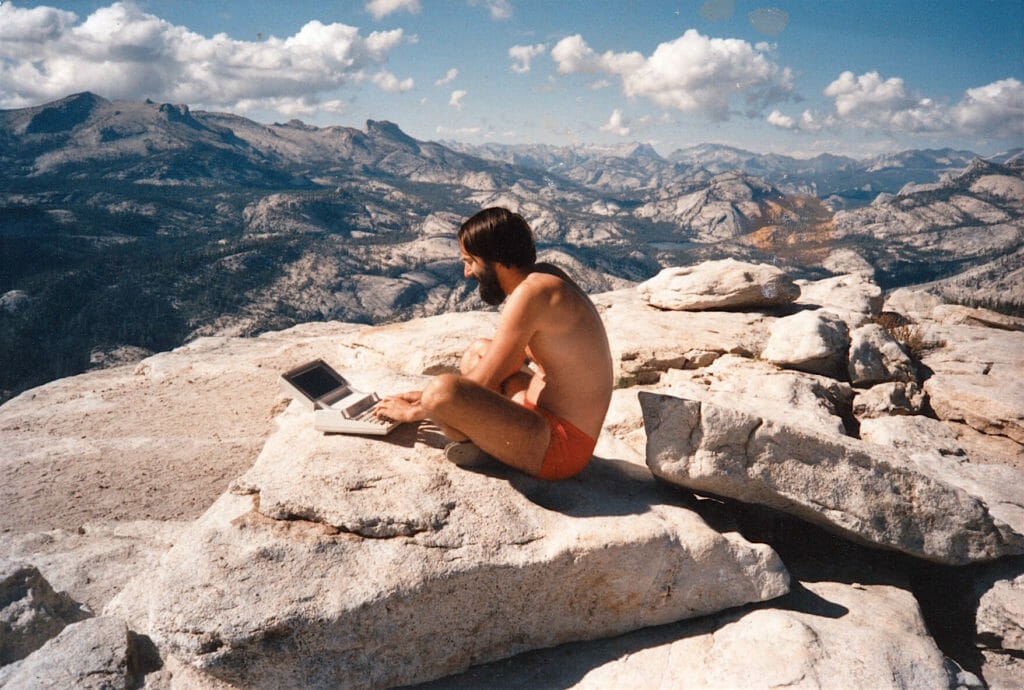 This is wild, wild country. I’m sitting naked with the computer sweaty on my lap, leaning in the sun against a massive boulder that somehow, millennia ago, rolled to a stop like a forgotten marble on this convex plain of glacier-polished slickrock. Now, the cracks vibrate with wind-driven wildflowers and the trees rustle like waterfalls around us… while hundreds of miles of trails meander from one amazement to the next like the erratic footprints of a hedonist in paradise. That’s not far from the truth. We’re in Yosemite.

Back from that pleasant exercise, I gaze across this wild valley and contemplate the changes. There have been many since I last wrote; a whole new phase is upon us. At the end of Chapter 29, we were in Eureka wondering what next; now we know: we’re driving to Ohio to sell the van and begin a pedaling jaunt through the northeast.

Such lunacy deserves a moment’s explanation. Deliberately leaving California for the midwest is not an act to be taken lightly. But consider this: if you were on a bicycle trip and found yourself in Palo Alto… Where would you go?

Not north, surely, into the brutal headwinds; nor south on busy Highway 1 toward the Mecca of motorized desert madness at the onset of summertime. West is out, for obvious reasons. So how about east into the 100° agricultural midsection of the state, then over some 9,000-foot passes and across the dry, desolate mega-wrinkles of Nevada?

Yup, you got it. The answer is (E) — none of the above. You’d hang around Palo Alto, just like we have for the past 5 months, inventing and then completing interesting projects.

But Columbus, by contrast, is the kind of place that inspires long-distance travel (believe me: it has done it to me twice). Spend a few months there and you’ll go mad with tire itch, dreaming of the delights of the next county, the next state, the next anything. And if you also need to deal with the boxed-up clutter of your previous life and drop in on a few old friends, then you have a perfect excuse to go there… since you know you won’t stay long.

And so we’re on the road — motoring our way cross-country to the headwaters of trip 3.

This is an adventure too, of course, though somehow not as “pure” as the visceral rhythms of human-powered wandering. The van is a rolling sea of clutter, and the recumbents rattle in the back like restless rugrats and pout. But no matter… until we hit the plains, we’re taking the time to feel the country.

Take Yosemite, for example. This is a place of dizzying and almost painful beauty, a place that aches to be touched. It’s a place of deeply intertwined ecosytems, of textures ranging from the silken to the terrifying, of rock sculpted by the eons in ways that stupefy. Yesterday we pitched camp at Tenaya Lake and set out on foot for a summit that seemed almost mythical in reputation: Cloud’s Rest.

Being ambitious and not entirely realistic, I hauled the computer all the way—a 16-mile round trip trek that ranged from the merely difficult to soft-core rock-climbing. I thought to write — to settle atop this 9,926-foot peak, gaze about, and capture the essence of the scene with a deeply encoded stream of passionate data. That was the plan.

Gasping for oxygen we struggled to the top, challenged less by the terrain than by our questionable timing (we left camp at 1:00). “Don’t turn back, it’s worth it!” urged the occasional exhausted hiker going the other way, and we pressed on beyond reason, striding purposefully, picking our way at last from boulder to boulder along the narrow cockscomb that is this peak…

Whoa! I had to sit down. I stood up again, gasped, and ran to and fro, looking out over an alien world. I gazed down on Half Dome and beyond into the great green-floored gash of Yosemite Valley. In all directions lay magic, from snow-streaked peaks to the combed mossy canopy of a forest far below — from sheer concave walls to the fluid, muscular, subtle flow of rock that was far too smooth to be rock.

I got out the computer and opened a file called CLOUDS. I wrote a title: “Solstice on Cloud’s Rest.” I stared at the screen for a while, chuckled sadly at myself, closed the file, and put the machine back in my pack for the trip down. It was 5:30, and time to hurry.

Trying not to think about chondromalacia, we bounded down the mountain, stopping to scrounge for walking sticks when the pain kicked in. Everything hurt, but the other hikers had been right: it was worth it. By dusk, tormented by mosquitoes and a steady flood of agony from all sensors below the waist, we reached camp and gave ourselves over to the sensory duo of fire and food.

Tenaya Lake is a walk-in campground, which effectively keeps the RV’s out. But that doesn’t guarantee freedom from the supernova set, who break out their gas lanterns at the first sign of encroaching darkness. Squinting in the light of their artificial suns, keeping the unnamable horrors of the night at a safe distance, they cluster around their picnic tables, throwing stark shadows on the rest of us with every movement. The waste light from a nearby campsite was brighter than the candle on our table — preventing a full retina’s worth of dark-adapting rhodopsin.

But that’s just part of the campground culture — as much as the mingling smoke from a dozen fires, the racket of Kid Row, the occasional guitar and folk music, and the casual visits of ambling neighbors from all over. There’s something languid about it all, numbing the mind to business problems and deadlines like some kind of harmless opiate. Time? People with watches look a little funny out here. (Of course, people with portable computers on their backs probably look a bit odd too.)

And then there are the kamikaze micro-syringes, those wee bastards that can turn a tender moment into a flurry of slaps and curses. Maggie stuck her finger in her ear earlier and killed two of them; I inhaled one with my burrito. Crossing a slow-moving creek on a long fallen log (a stupid act, with the HP on my back), I had to steel myself against an onslaught severe enough to make my bare legs look dark and furry. I picked my way carefully along 30 feet of shimmying log in rising urgency, fighting off the panicky slapdance that the assault demanded. I made it, of course (you’re reading this story), though I was weakened by blood loss.

But mosquitoes, leg pain, and gas lanterns notwithstanding, Yosemite is an experience that will be hard to end. Even a foray for firewood is a journey of wonder, a wide-eyed excursion into a topsy-turvy landscape that enchants the eye at every level of magnification. The blue lake, the cries of “off belay!” from high on impossible rock faces, the echoing tattoo of woodpeckers, the mysterious straight lines of contrasting mineralization that cut across acres of slickrock, the graceful deer, the deliciously convoluted shape of the land, the neck-cricking horizon, the magic light at sunset… it all invites intimate exploration like the body of a new lover. Somewhere out there is Ohio, with a complex set of problems to solve: it can bloody well wait a few days.

Oh yes, business. Let me drag my fingers away from Beauty for just a moment and bring you up to date.

My new office, the latest in a recent succession of four, is in Milpitas, California — under control of Alan Selfridge. Yes, the CAA mini-empire grows ever more complex, with the publications office in Chico, a literary agent in Berkeley, and new base support near San Jose — all linked by the net, of course. That was one of the reasons for our two-week return to Palo Alto after the Kinetic Sculpture Race: building what I hope will be my first truly effective business structure for this zany life of nomadness. During the same period, I also started a biweekly column in Computer Currents, dedicated to the body of high-techniques that allow one to do business anywhere. (The humor in all this is left as an exercise for the reader.)

In other news, I recently received one of the most entertaining comments ever about the Winnebiko. I was in one of those crowds of people that could have been anywhere, answering the usual flurry of identical questions and waiting for an opening that would let me hop in my getaway bike and ride out of town. A grinning blond fellow gestured at the control console and asked (with a sly twinkle), “Does all that tell you why you’re doing this?”

And speaking of computers, this week’s political commentary comes from a friend’s Macintosh. He fired up an ANAGRAM program, which figures out meaningful alternate combinations of a word’s letters (lives – evils – Elvis – veils) and typed in “Ronald Wilson Reagan.” The machine thought about that for a while, then responded “Insane Anglo Warlord.” I have nothing to add.

On that note, I inaugurate the next phase of this journey. Forgive the irregularity of recent columns and bear with me a little while longer, for one of the true hallmarks of adventure is unpredictability…

Posted in Miles with Maggie
← Dataspace – The Essence of DisconnectionHiking Heaven, Hiking Hell →