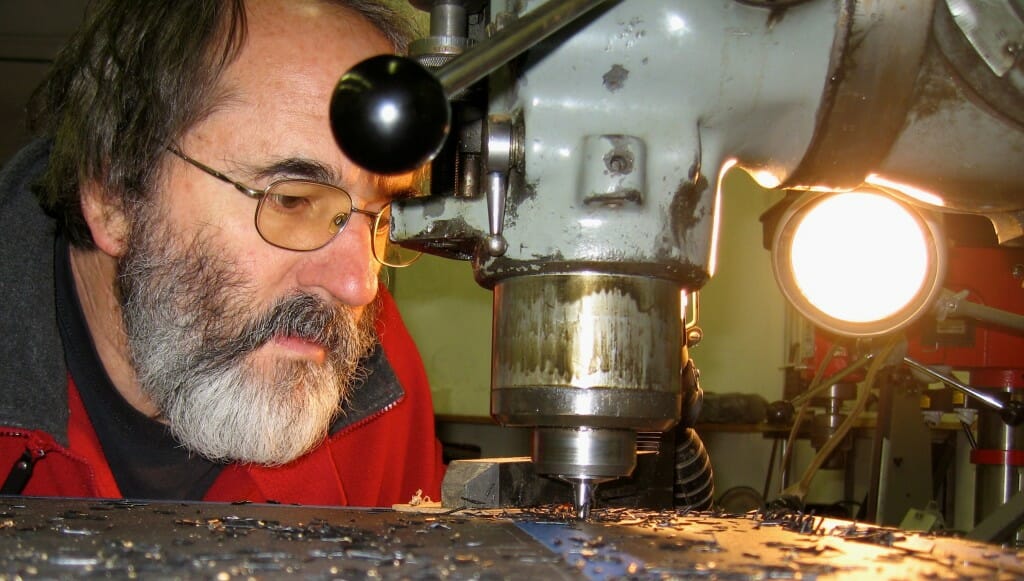 Things are about to get a lot more active in this blog… for the past year, I’ve been chipping away at the project, but have only rarely posted here. I’m happy to report that I’ve just decided to take a different approach to publishing this sprawling narrative of gonzo engineering, and there is suddenly a huge backlog of material.

Exactly two years ago, I had the idea of conjuring a “nickel generator” in the form of a subscription PDF called the Nomadness Report. Produced like a magazine, it would carry the most substantial content about all this unfolding gizmology… with the blog reserved for general updates. It seemed like a pretty good way to monetize without advertising, so I started publishing issues… and people liked it. 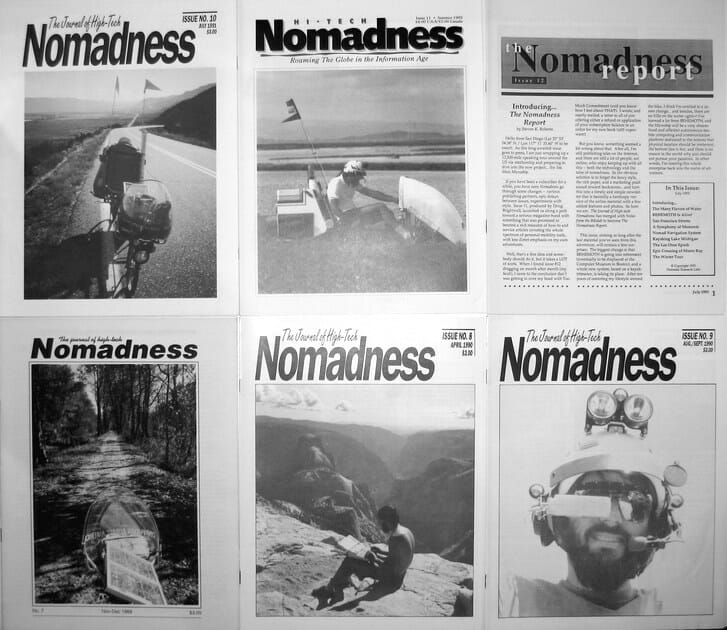 I did it weekly for a while, then after missing too many deadlines I redefined it as a monthly (with larger issues). I did a few that were around 16 pages, but the schedule started to slip again… lately feeling more like a quarterly. This is familiar territory; as a perfectionist, I spend way too much time procrastinating and fine-tuning the text and layout, to the point that it stops being fun and steals time from its own subject matter. As I recall, it was already called a quarterly, but I was joking about that meaning “every quarter decade.”

Meeting deadlines on this more recent publication was not the only problem. More serious was the fact that most of my “good stuff” was ending up behind a paywall… not a particularly forbidding one at $20/year, but definitely a layer of obscurity in an era when there is so much information available for free. And while there are now 205 pages of polished back issues in my online store, not many people want to buy “Issue 17” of something unless they can be sure that there is useful content. My income from the whole series was minimum wage at best.

Over the past few weeks, this has really been bothering me… so I just sent a note to all my subscribers, announcing the new plan: 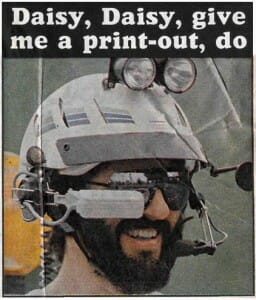 That combination covers all the bases, with fine-grained real-time updates as well as long-term archiving and nickel-generation. The mailing list will be fun… over the years I most enjoyed the Notes from the Bikelab (90-92) and Microship Status Reports (92-01) series, along with “Nomadness Notes” spanning the same era (all together, about 200 issues). These went to a mailing list that eventually reached 4,500 people… and were playful, informal, and free. The biggest win from my perspective was having a community of interesting folks who sparked ideas, replied quickly with answers to questions, and offered logistical support.

I loved doing those listserv postings, but as the years passed and the Microship project faltered, I stopped… and the list grew stale as people changed addresses. Meanwhile, new publishing tools emerged: blogs, PDFs, eBooks… then ephemeral high-noise social media like Facebook and Twitter, seductive for real-time chatter, but impossible to use alone as archives. I have gone along with it, but miss the personal immediacy of that original “push technology.”

OK, enough with all this planning talk – time to get to the fun stuff! Let’s start with a light sampler of recent progress, with more detail over the next few weeks as I catch up with blogging.

The photo of my intently milling mug at the top was from a week or two ago while I was breaking ground on the new power distribution console substrate. All the hardware for this is on hand, and includes nearly 50 circuit breakers with backlights and status indicators, a separate AC digital multimeter, the MATE3 control/display unit for the Outback system, a homebrew replacement for the old Yanmar generator control cluster, and about a dozen stainless pushbuttons with ring LEDs and legend plates (including a row for local console and equipment bay lighting). The power consoles have been annoying ever since I got the boat, with obsolete cruft and serviceability issues… this new panel is going to be sweet. I’ve already pulled a mountain of abandoned cable, and once this in in place there should be nothing that is undocumented. 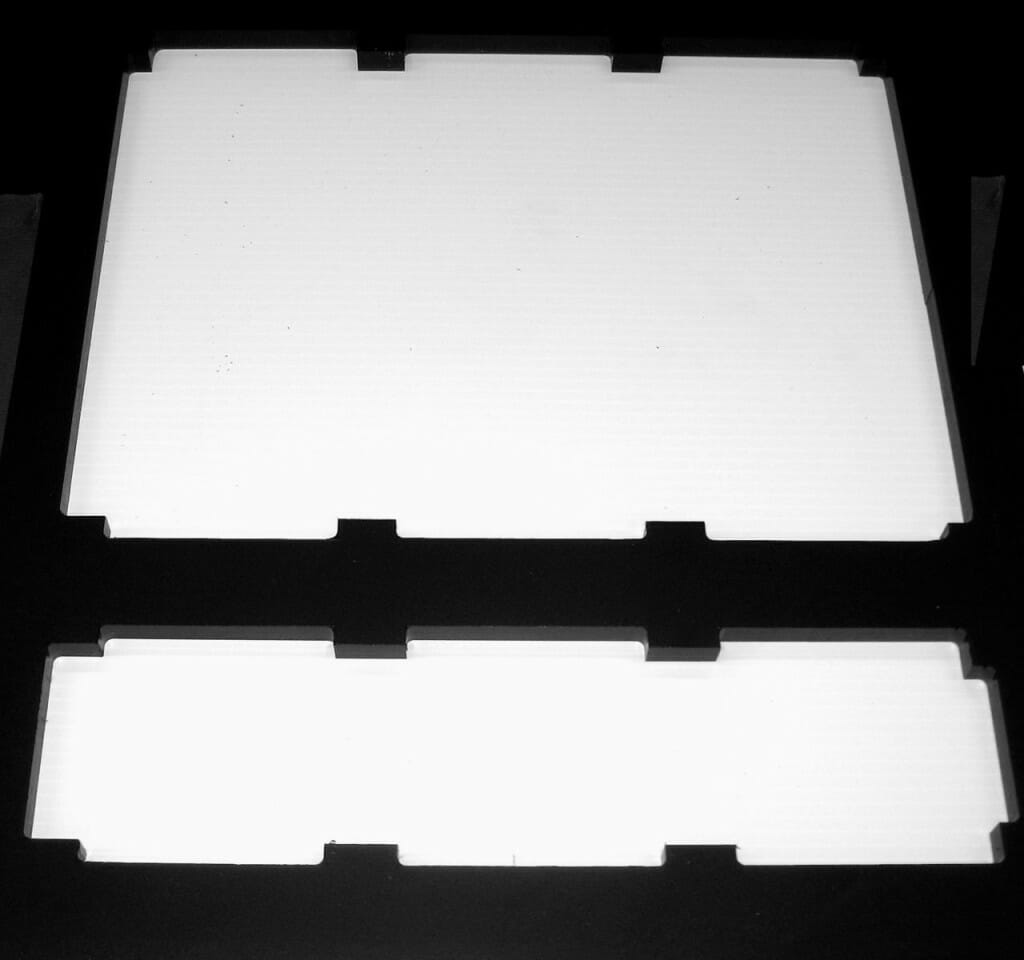 The new panel will also eliminate the old separate console region for the AC side of the power system, opening up space for a much-needed pantry…

This week I expect to finish the milling, mount hardware, and start the transition into the boat (the messy part… moving lots of wires in a temporarily cramped space). In the photo at the top of the page, I was just starting to cut the complex openings for the Blue Sea breaker panels; they are shown complete at left.

Much more detail about this part of the system will be posted once it’s in place. Over the next few days, I expect to be staring a lot at this scene: 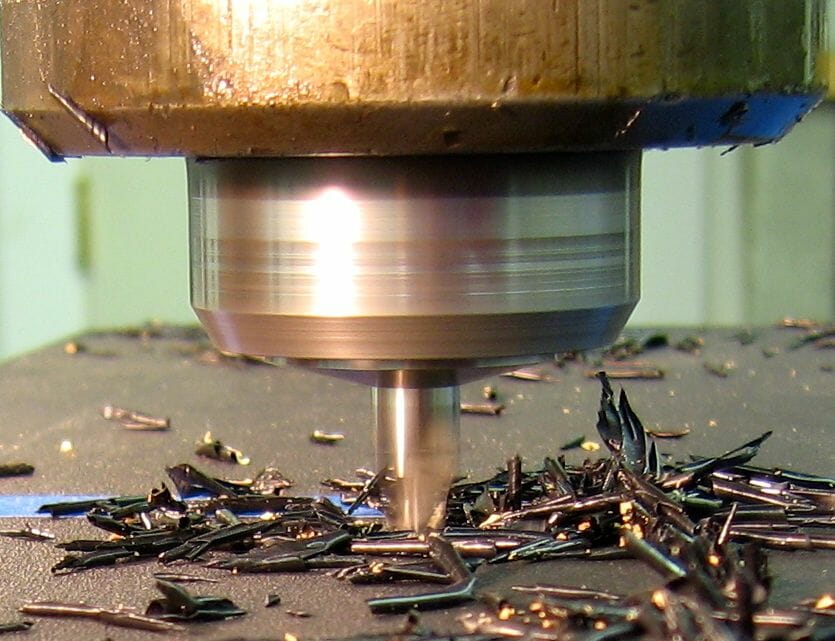 I use a laptop most of the time, since I’m commuting between boat and shop almost every day, but there are times when there is just not enough display real estate. Doing drawings with OmniGraffle, editing images, setting up an audio workstation, and lots of other activities all call for way more pixels, and an iMac 27 is a key part of the wrap-around console region. 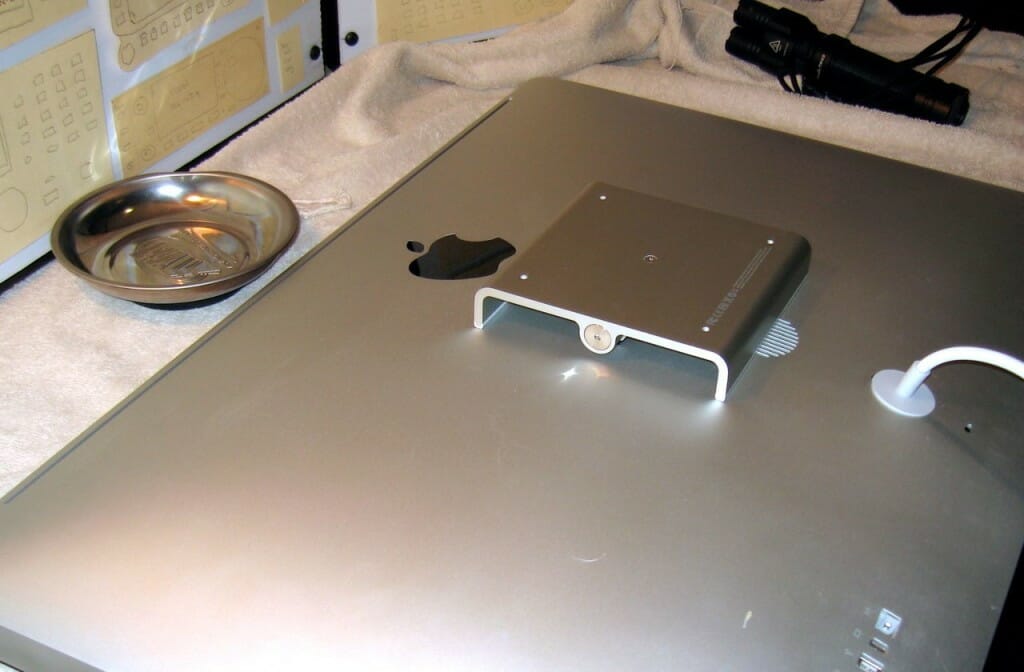 I’ve used an Ergotron monitor arm before, and was delighted to discover that they have a model (the MX) that can handle the weight of this machine (but not while sailing!) and that Apple sells an interface gadget that lets you convert from a desk stand to a VESA mount. This solves the problem neatly, and the mounting location works well at various heights and distances with a deployable keyboard side-table, swings around over the little “demi wall” to allow watching the screen from the pilothouse seating, or lets me stow it into a nest and strap it down when getting off the dock (note to self: put that on preflight checklist). 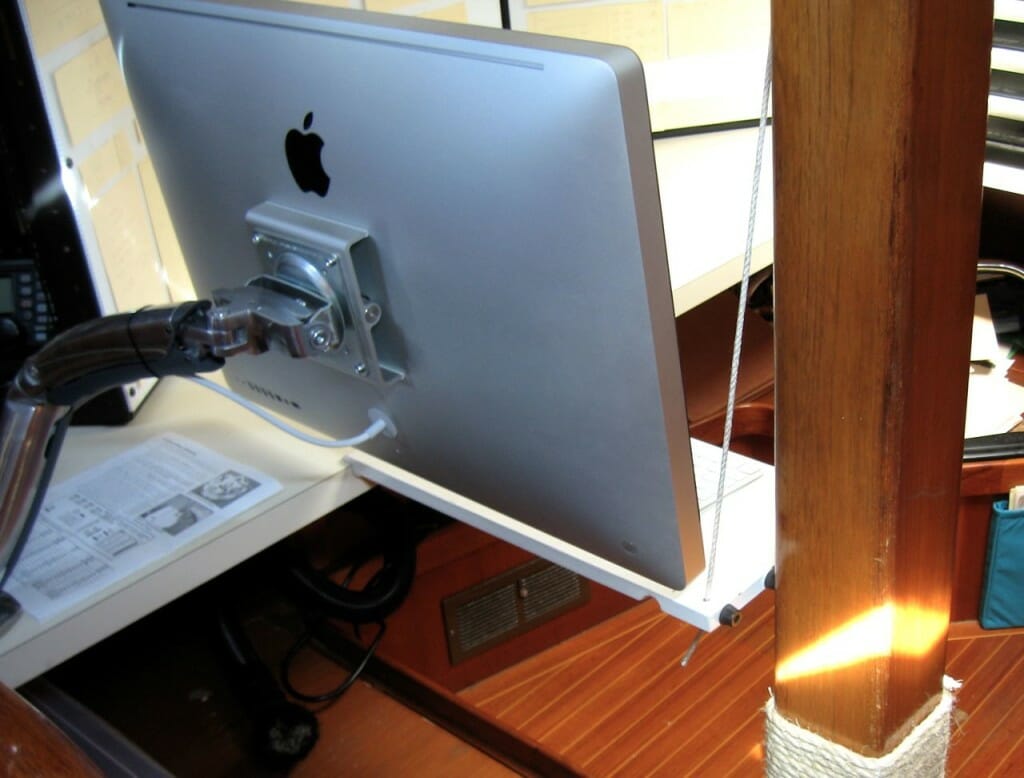 The Ergotron MX has a good range of adjustability that lets you reach a neutral balance point, and the external body is anodized aluminum. There are steel parts, which I treated with CorrosionX (essential stuff on a boat), but of course if this takes salt spray then I will be a lot more worried about what’s attached to it! The adjacent console will have a roof with overhang and a fabric curtain to shed random droplets, but a knockdown would be most unpleasant for all the electronics (not that it wouldn’t be a bad day anyway). 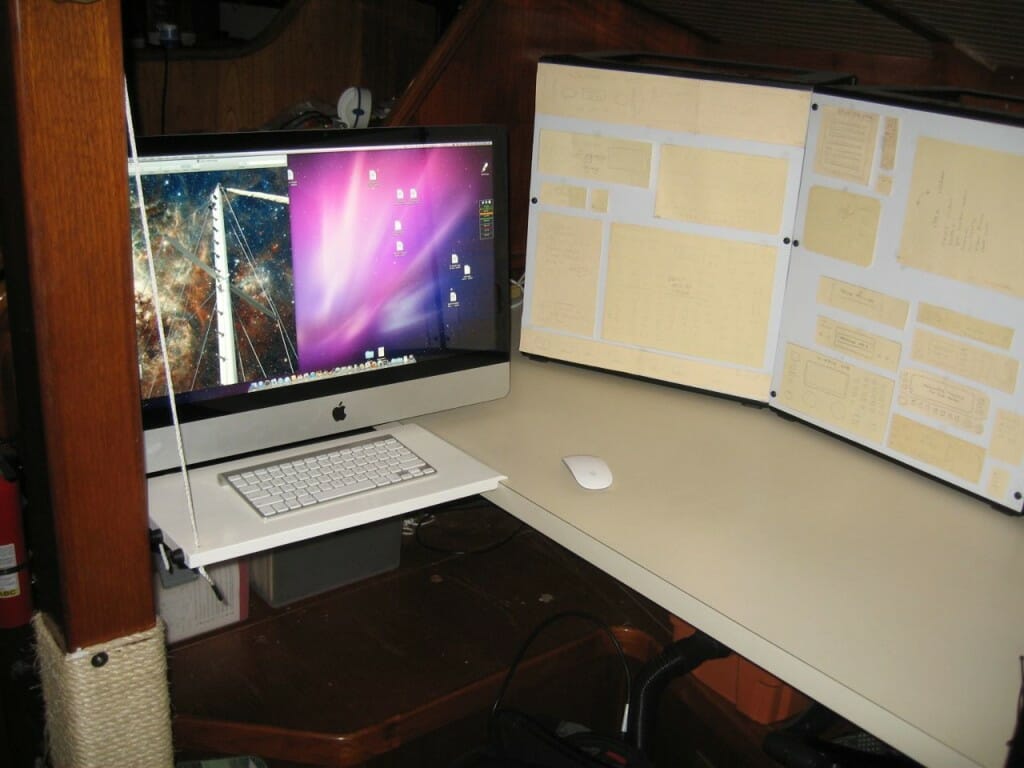 The white surface holding the Apple wireless keyboard has a felt-lined lip at the table end, four rubber bumpers to engage the mast support, and a loop of line that goes over a cleat up near the top. A Heil SB-2 microphone boom mounts just under that cleat, conveniently located for podcasting (seated) or flute-playing (standing). And, speaking of seating, we’re going to pedestal-mount a gas-lift throne with removable arms from Soundseat… I need a 5-inch range of vertical adjustment to switch gears between lab desktop and piano studio. When in piano mode, the keyboard side-table lifts off and slips into a fabric pocket down by the base of the mast (otherwise known as Isabelle’s scratching post).

Finally, although it is on the back burner until pilothouse power and helm consoles are done, I’m gradually gathering the pieces and refining the layout of the wrap-around lab/studio region.

The equipment racks, once the frames are fixtured to the desk, will be assembled in stages that are loosely based on need. First one is probably stereo, partly since wiring for the old one is very much in the way of some of the power-region stuff. Immediately thereafter, I want to start packaging the mountain of communication gear that is lying around waiting to be used. 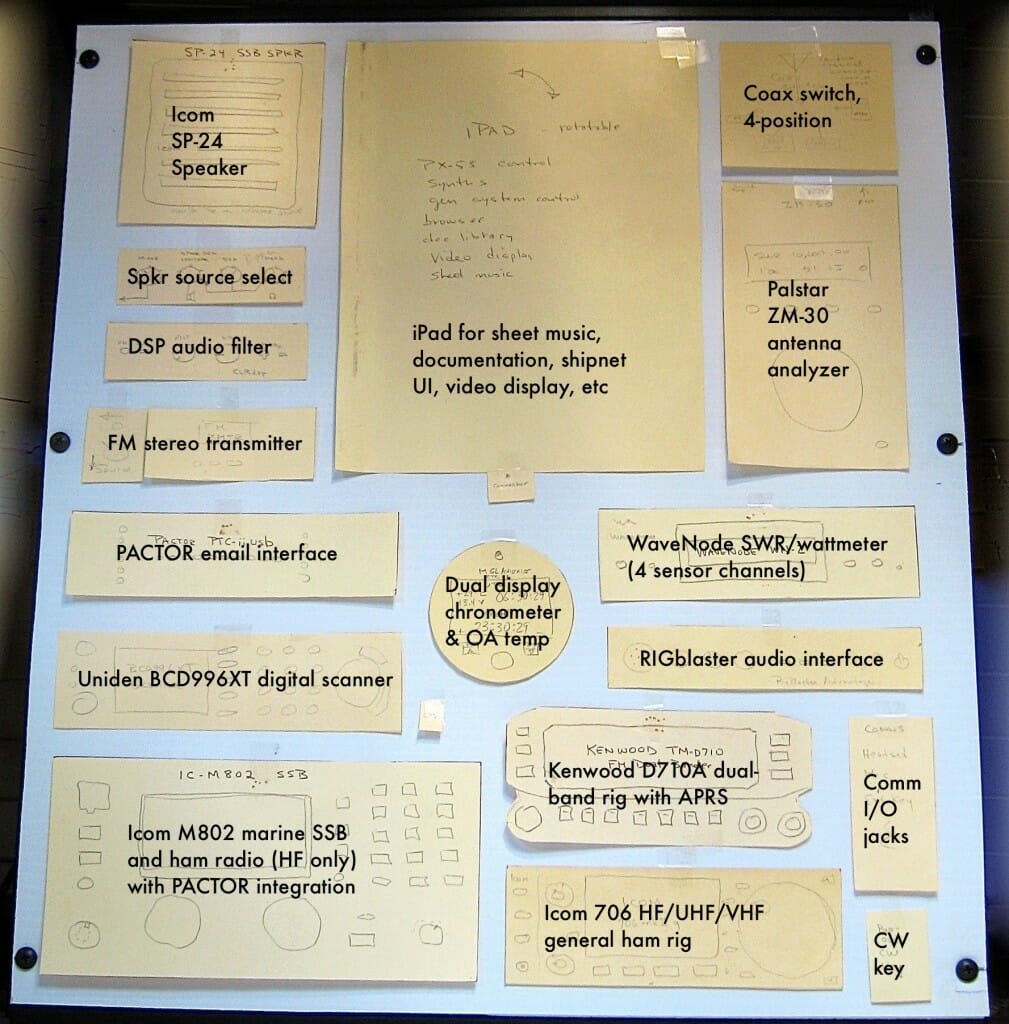 This is the CAD layout (cardboard-aided design) for the center of the three 12U rack cabinets… each 21″ tall and 19″ wide. I do it this way to allow sitting at the desk and playing “let’s pretend,” which is a much more effective way of catching usability issues than staring at a picture on a computer. There is deliberate redundancy here (the Icom 706 duplicates some of the HF capability of the 802 and some of the VHF/UHF coverage of the D710A), but the idea is to have that as a parallel system with an uncommitted feed line that pops out the deck at the base of the mast, where a new halyard is in place to haul aloft HF antennas or a platform that rides in the trysail track to deploy sensors, cameras, or WiFi antennas. (The antenna analyzer at the upper right is for some of that tinkering, though it might be more practical as a hand-held instrument… none of this is cast in aluminum yet.)

In the middle is an iPad, which serves multiple purposes here, and some of the speaker routing is at the upper left. One of the destinations of any audio channel is the 16-channel mixer located in the nearby A/V panel, and another is a sparse-matrix crossbar system reminiscent of my old Audio, Video, and Serial units from the Microship era. Lots more on all this as it unfolds, but a fundamental design goal  in this part of the system is to let anything talk to anything without requiring computers to be working to enable core functions related to survival. I don’t trust them.

OK, enough for now. More photos and details soon; I’m off to make some boat parts! I’ll leave you with this… a talk I gave in September of 2000 at the Computer History Museum, on the occasion of adding the BEHEMOTH bicycle to their collection.