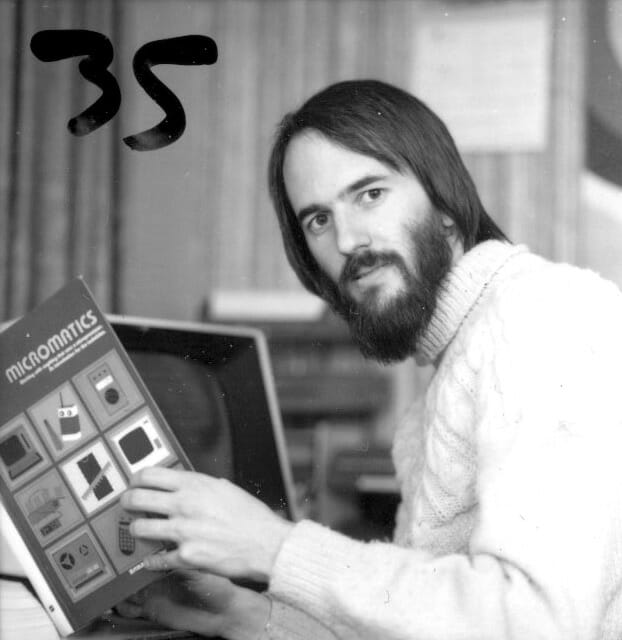 These three contact sheets were tucked into an old binder, and under the microscope I could see that the calendar on the wall was April, with the first on a Wednesday. That happened in 1981, which makes sense – my first book (Micromatics) was released in late 1980, and I can see the fat but clearly unfinished manuscript for Industrial Design with Microcomputers on my lap in photo 25. I used one of the images in the program for my talk at COMDEX Europe a year later, and the image of the computer shown full size at the bottom of the page was an illustration in the textbook (page 67). The photographer was Frankie Foster… I still remember the relaxed photo session 36 years later! I was 29 years old.

All images may be clicked for larger versions, though of course these are contact sheets…

The first set shows me at my desk in the living room of my house in Dublin, Ohio… departure point for the bicycle trip that began in September 1983. I see my beloved Tektronix 465 scope over against the wall, though most of the messy shop space was in the basement. At the other end of the room (not in the photos, alas) was the Hammarlund SP-600 shortwave receiver, and the wall out of frame to right was floor-to-ceiling books. The cable turtleneck sweater was made by my mother, Phyllis Roberts.

This second group focuses on the computer, and reminds me of what a mistake it was to sell that fabulous sloping-panel rack cabinet.

This batch highlights the writing projects. Micromatics was my first book, published by Scelbi in 1980, and began as a series in ET/D (Electronic Technician/Dealer) magazine. The fat manuscript was work-in-progress on the Prentice-Hall textbook (another review).

Finally, here’s the full-size image of that 1981 computer system. The workhorse was the Cromemco Z-2D, and the front panel on the left is my homebrew 8008 from 1974 (with card cage down near the floor), now in the Computer History Museum. The lower units include fanfold paper-tape reader, analog I/O for oscilloscope graphics and other tinkering, and an extra pair of floppy drives. The phone (SNICKER) was in the acoustic coupler; at this point I was using the occasional BBS as well as the embryonic Source system (where my address was wordy). To the right of this cabinet is the Diablo printer, which I adored, and the Hazeltine 1500 terminal on the desk.

I love little photographic treasures like this… intermediate life stages can so easily disappear in the mists of time. Two years later I would be in the early stages of preparation for what would prove to be a major adventure.

Finally, just as a little footnote, this is from October 1980, taken by my friend Steve Orr from Cincinnati. I was on my back porch, showing off one of the treasures from the garden:

Posted in Photographs
← Managing the Small System EnvironmentPhotos from 1981 →