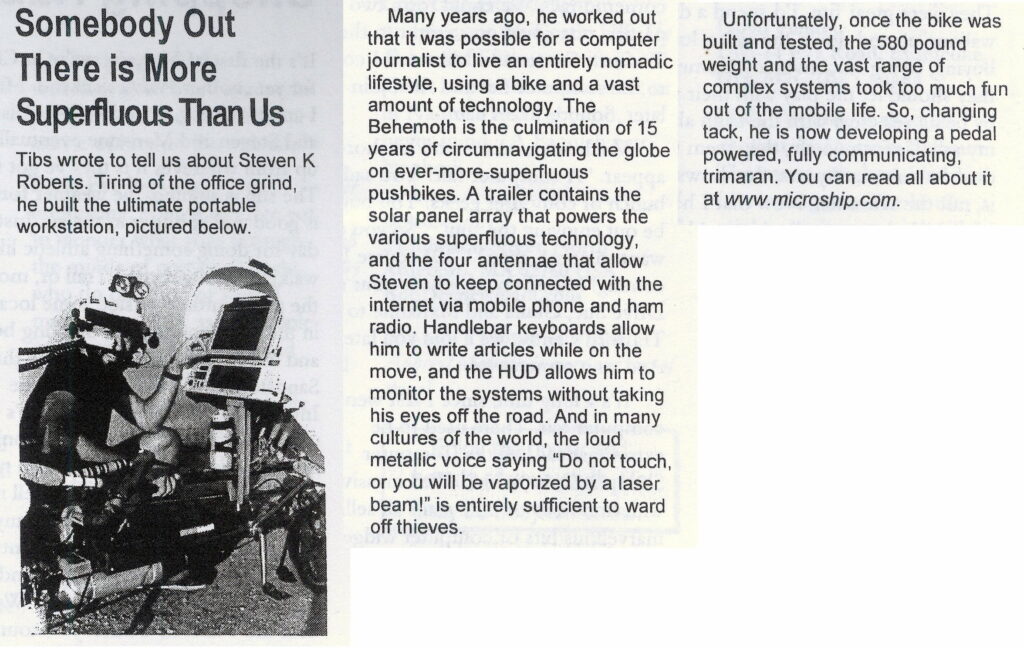 This delightful Hugo-nominated geek zine from the UK picked up the BEHEMOTH story and gave it a little sidebar, rearranged here for easier layout.

Somebody Out There is More Superfluous than Us
Plokta
June 1, 1999

Tibs wrote to tell us about Steven K Roberts. Tiring of the office grind, he built the ultimate portable workstation, pictured below.

Many years ago, he worked out that it was possible for a computer journalist to live an entirely nomadic lifestyle, using a bike and a vast amount of technology. The Behemoth is the culmination of 15 years of circumnavigating the globe on ever-more-superfluous pushbikes. A trailer contains the solar panel array that powers the various superfluous technology, and the four antennae that allow Steven to keep connected with the Internet via mobile phone and ham radio. Handlebar keyboards allow him to write articles while on the move, and the HUD allows him to monitor the systems without taking his eyes off the road. And in many cultures of the world, the loud metallic voice saying “Do not touch, or you will be vaporized by a laser beam!” is entirely sufficient to ward off thieves.

Unfortunately, once the bike was built and tested, the 580 pound weight and the vast range of complex systems took too much fun out of the mobile life. So, changing tack, he is now developing a pedal powered, fully communicating, trimaran. You can read all about it at www.microship.com.