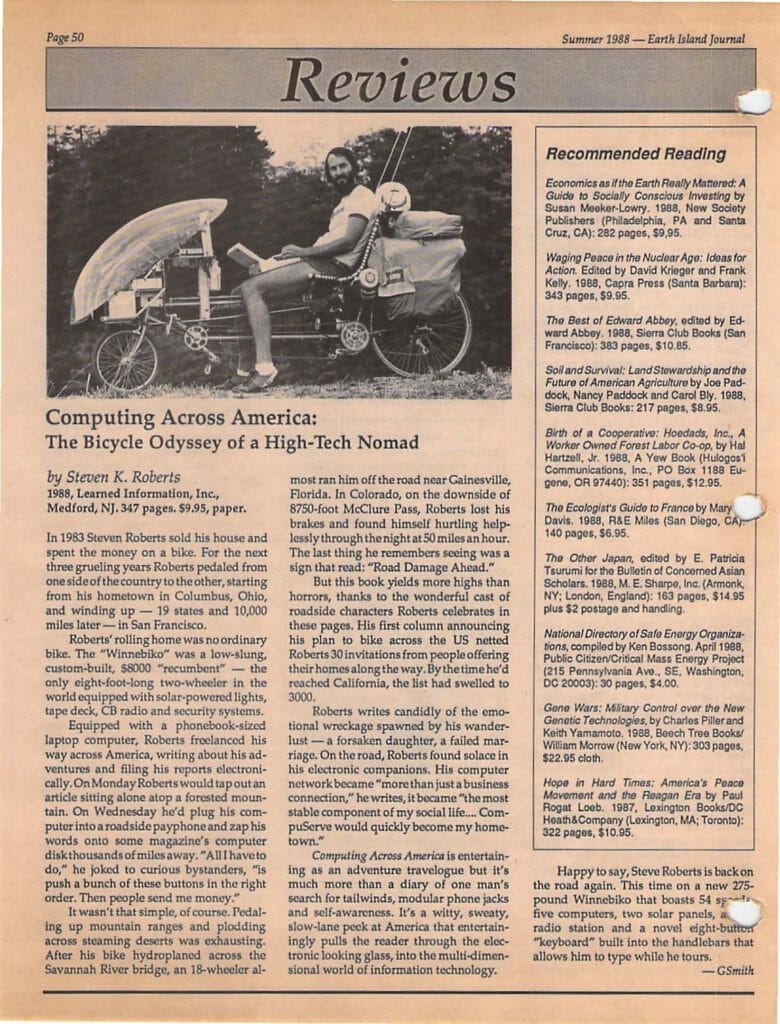 In 1983 Steven Roberts sold his house and spent the money on a bike. For the next three grueling years Roberts pedaled from one side of the country to the other, starting from his hometown in Columbus, Ohio, and winding up — 19 states and 10,000 miles later — in San Francisco.

Roberts’ rolling home was no ordinary bike. The “Winnebiko” was a low-slung, custom-built, $8000 “recumbent” — the only eight-foot-long two-wheeler in the world equipped with solar-powered lights, tape deck, CB radio and security systems.

Equipped with a phonebook-sized laptop computer, Roberts freelanced his way across America, writing about his adventures and filing his reports electronically. On Monday Roberts would tap out an article sitting alone atop a forested mountain. On Wednesday he’d plug his computer into a roadside payphone and zap his words onto some magazine’s computer disk thousands of miles away. “All I have to do,” he joked to curious bystanders, “is push a bunch of these buttons in the right order. Then people send me money.”

It wasn’t that simple, of course. Pedaling up mountain ranges and plodding across steaming deserts was exhausting. After his bike hydroplaned across the Savannah River bridge, an 18-wheeler almost ran him off the road near Gainesville, Florida. In Colorado, on the downside of 8750-foot McClure Pass, Roberts lost his brakes and found himself hurtling helplessly through the night at 50 miles an hour. The last thing he remembers seeing was a sign that read: “Road Damage Ahead.”

But this book yields more highs than horrors, thanks to the wonderful cast of roadside characters Roberts celebrates in these pages. His first column announcing his plan to bike across the US netted Roberts 30 invitations from people offering their homes along the way. By the time he’d reached California, the list had swelled to 3000.

Roberts writes candidly of the emotional wreckage spawned by his wanderlust — a forsaken daughter, a failed marriage. On the road, Roberts found solace in his electronic companions. His computer network became “more than just a business connection,” he writes, it became “the most stable component of my social life…. CompuServe would quickly become my home town.”

Computing Across America is entertaining as an adventure travelogue but it’s much more than a diary of one man’s search for tailwinds, modular phone jacks and self-awareness. It’s a witty, sweaty, slow-lane peek at America that entertainingly pulls the reader through the electronic looking glass, into the multi-dimensional world of information technology.

Happy to say, Steve Roberts is back on the road again. This time on a new 275-pound Winnebiko that boasts 54 speeds, five computers, two solar panels, a radio station and a novel eight-button “keyboard” built into the handlebars that allows him to type while he tours.