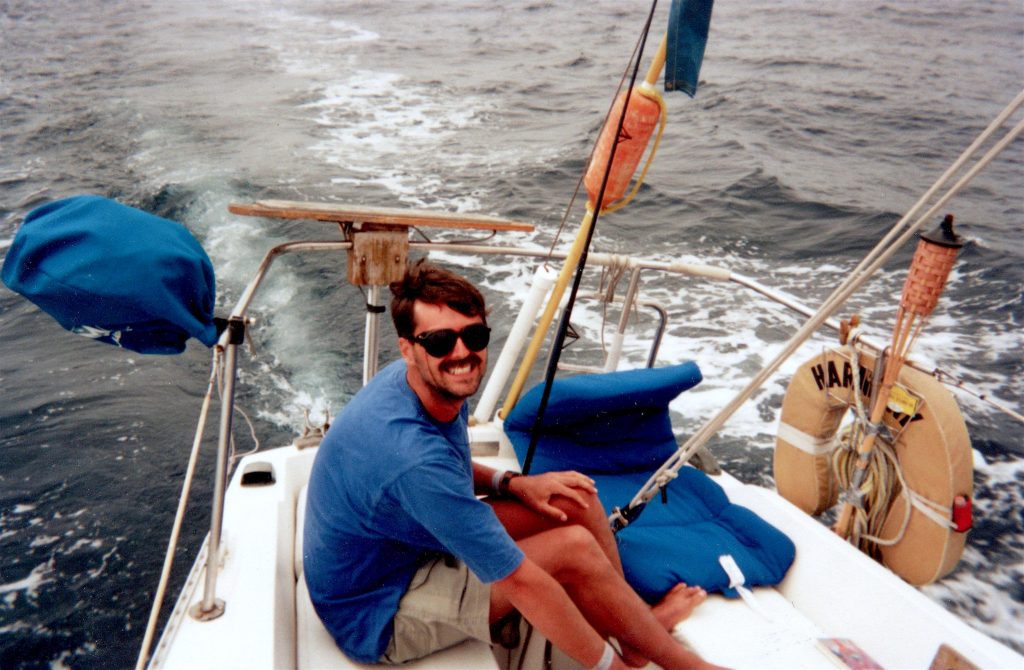 The UCSD Microship lab epoch has ended after 2 years, and in this report we embark on a sailing adventure to Catalina Island on Lonnie Gamble’s boat Harmony (above)… then return to focus on the new lab quest. The entire project is in limbo, but Faun and I manage to have a bit of fun.

Behemoth, in the Old Testament, a powerful, grass-eating animal whose “bones are tubes of bronze, his limbs like bars of iron” (Job 40:18). Among various Jewish legends, one relates that the righteous will witness a spectacular battle between Behemoth and Leviathan in the messianic era and later feast upon their flesh. Some sources identify Behemoth, who dwells in the marsh and is not frightened by the turbulent river Jordan, as a hippopotamus and Leviathan as a crocodile, whale, or snake.

They are emissaries from the deep… that much is certain. Their mission: to deliver an unambiguous message, urging us off our sedentary geek-butts and back into the technomadic life without delay.

Startled from our post-watch slumber by shouts on deck, Faun and I stumbled after midnight up to the cockpit, blinking off sleep and the mild queasiness of the monohull’s pendular sway. We were out of sight of land, on the 75-mile passage from San Diego to Catalina, and the last thing I expected was visitors — yet there, in the bow pulpit, our friends Lonnie and Sarah were calling greetings and pointing excitedly.

And indeed, inside the smooth muscular curve of our bow wave, a pair of celestial beings swathed in sparkling green bioluminescence matched our every move. Surreal, magical, these rollicking finfolk seemed the perfect embodiment of joy — darting across the bow, riding the wave, disappearing into the deep only to arc together through the undulating surface like some acid-inspired vision of a disembodied Baryshnikov. Their flawless pas de deux, which would have been merely astounding in the light of day, was cast further into the realm of fantasy by the dancers’ living cloaks of green-blue twinkles and smooth phosphorescent contrails…

Such perfect hydrodynamic form! I had to wonder how the dolphins perceived the lumbering leviathan with rigid ventral fin and red/green dorsal lights, filled with parasitic bipeds whooping at them from above the surface. Alien cultures rub shoulders and come away with a mutual sense of amazement, and, in our case, a renewed sense that we need to get on with the project so that the wonders of life at sea can become our daily routine.

The night, like all all-nighters ranging from deep hacking to new romance, was timeless and eternal — the mild queasiness of visually uncorrelated 3-axis movement mingled with the quiet security of the GPS dutifully displaying a track for us to follow. The gurgle of water, the intermittent thunkings and clinkings of boom and rigging… all formed a backdrop for the rather industrial whining of Homer the autopilot. Standing watch was a blend of tweaking Homer, sipping tea, and scanning the dark horizon for ships; on the dog-watch at about 3 AM, as we crossed busy traffic lanes, I tracked four freighters — uneasily plotting (OK, guessing) their DRM lines, trying to anticipate closest point of approach, breathing easily only when our courses were clearly divergent. There’s a keen alertness about this sort of thing that overrules exhaustion and makes you feel VERY alive. It also makes you want radar.

Morning came slate gray. I crawled clumsily from the Catalina 27’s tiny quarter berth (the cave) to find Faun at the helm, steering us along the eastern end of Catalina Island. We made our way to Avalon, paid $15 for the night, and performed the standard bow & stern mooring… then dinghied to land and slowly rocked through breakfast as the inner ear struggled to assimilate the now-strange reality of vestibular data that is consistent with visual data.

Exploring the island was amusing — the quaint touristy town of Avalon was in the grip of high-school graduation, and we poked our heads into the old casino to watch the ceremony… small-town simplicity touched by southern California multiculturalism and the age-old poignancy of taking a first tentative snip at those parental ties. We wandered on, climbing into the hills, freezing in the path to watch a quartet of razorback wild boar snuffling clumsily among the succulents… poised to bolt if a quarter-ton of angry mom were to materialize.

But she didn’t, and the week flowed on — a much-needed break from the concrete and stress of the Microship lab’s last days at UCSD. We moved to Emerald Bay after briefly sampling Two Harbors and finding it a beer-oriented maelstrom, sort of like a Los Angeles city park pre-filtered by the insufficiently daunting channel of open water (a 20-mile crossing that many apparently undertake when dead drunk or hopelessly hung over). I made a mental note to step up watch procedures near cities. Emerald Bay, however, was the opposite: no bars or facilities of any kind, just a few mooring buoys, a beach, and a little island perfect for snorkeling.

Now, I’ve never donned scuba gear except in a pool, and I was carrying my still-untested mask/fins/snorkel package, so I approached this next level of exploration as a newbie…

Above water, the little island (Indian Rock) was unassuming — just a ragged outcropping streaked with white seagull-scat and dark with scraggly vegetation. Underwater, however, the reef was a completely different world: a vast waving jungle, weightless and flowing in the alternating fluid breezes of wave motion. We floated through narrow passages, conscious of the potentially painful contrast between soft flesh and barnacle-encrusted rock, yet seduced by the beauty around us. Garibaldi fish darting orange, colorful snails, delicate anemones… and everywhere that lazily flowing jungle perched atop an undersea mountain falling away on 3 sides into deep and murky canyons.

Drifting along in our circumsnorklation, we caught a flicker of movement in the deep… something BIG. This is an effective way to elevate the heart rate in a shark-conscious society, but it turned out to be a trio of scuba divers, clad in wetsuits and serious equipment. One turned and followed bikini-clad Faun with his underwater video camera…

The anchorage was rolly, but we adapted — the cozy feeling of sharing intimate space with another couple so warm that the tourist mecca and party-harbor seemed absurdly distant. Indian cooking smells, flute and guitar, soft sounds of love… THIS is cruising. The week was an education, offering countless new tricks and nautical lessons that could never be acquired through perusing the nautical bookshelf or even daysailing. Certain images are engraved in my memory: Lonnie and I focusing all senses on the night approach to Dana Point, trying to correlate the tangle of shore lights with the charts and GPS… lying with Faun on the bow and gazing up at the luminous triangles of sail ghostly in the moonlight… looking DOWN on our anchorage after an hour’s sweaty climb… conjuring magical meals from the redolent depths of the icebox and a small gimbaled stove… all of it reminds me of why we’re doing this.

There was one rather absurd encounter that added a surreal twist to the whole adventure. We approached Two Harbors from the east, carefully navigating around the reefs and the aptly named Bird Rock enroute to the busy moorage. A large rustbucket of a fishing boat, the Judy Lee, was anchored nearby. “HELP!” cried a voice. “HELP!” Naturally, we steered over to see what was going on, and two vigorously handwaving Korean fishermen started yelling at us, shouting things like “all systems down!” and “crazy American captain!” and “call police!” I hopped on the radio and called the Coast Guard, then the local Harbor Patrol, telling them what little I knew.

After we observed the crowded Isthmus for a bit, we headed back out to sea… and there on the VHF was the Judy Lee. “Send help! No English!” The Coast Guard was having no luck figuring them out, and was under the impression the boat was the Mirabelle, located in San Pedro. “Where are you?” “I don’t know! Send help!” Again I picked up the microphone and explained where they were, still not knowing the situation on board.

Two days later, we heard the rest of the story from the Harbor Patrol. Seems the crazy American captain had gone quite berserk, and attempted to sink the ship by pounding a hole in the hull with a hammer. Fights ensued, and they had been anchored for two days trying to get someone to stop and help. But this is awfully close to LA… apparently, nobody wanted to get involved.

Limbo On The Beach

So that was ONE week of the ten that have passed since our last update in this series. The rest were mostly preoccupied with the crisis of the moment — locating new lab space. The UCSD lab is now history, the politics of academia mercifully a memory, the equipment itself shoehorned into 1,600 cubic feet of storage space but for the essential Macs and office tools that keep us linked to the world and generating publications. We toured a number of potential sites on the west coast this past month, bringing the suite of possible new homes to three universities, two corporations, a national lab or two, and a random variety of light-industrial rentals. A couple of those possibilities are particularly interesting… but I know better than to jinx them by too-early rhapsodizing.

In the meantime, we’ve rented an ocean-view apartment in Del Mar to decompress and work our tails off on publication projects and the epic space quest. Life is good… reminding me of my arrival in San Diego two years ago. It seemed so simple then, going to the beach whenever I felt like it, dreaming big dreams and making initial contacts around town. Now I have happily become a WE, and WE have a trimaran. Two of them, in fact, which is one too many. We also have the results of two years of work with UCSD students, some of whom were truly exceptional and contributed greatly to the project despite a prevailing culture that sees soldering as something vaguely distasteful in a vo-tech sort of way. In other words, it’s been a good two years, but it’s time to move on. Hopefully, the next Nomadness Notes will jubilantly report on our new surroundings.

Cheers from the beach!