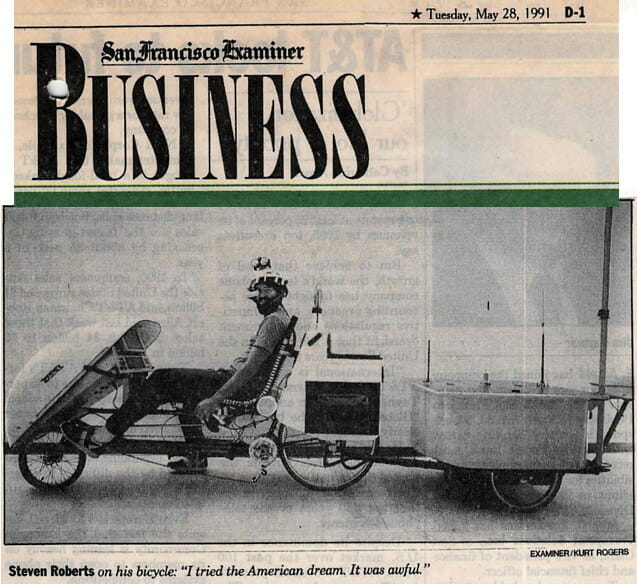 This is one of the best newspaper articles about BEHEMOTH and the underlying human tale… the writer is tech-savvy, and went on to write the pivotal book, Fire in the Valley: The Making of the Personal Computer.

The photo above is dated by a couple of cues… no cables coming out of the bottom of the console yet, and a stock Zzipper fairing instead of the custom fiberglass one that we did to more precisely match the shape of the enclosure.  But the bike was well underway, and this was written during my high-energy tenure in the bikelab at Sun Microsystems… an epoch that I remember fondly, given the community of brilliant geeks that formed around the project.

Silicon Valley has its share of unusual characters and technology but nothing quite like Steven Roberts and his amazing BEHEMOTH.

“I’m just a high-tech nomad, or maybe a yuppie hobo,” says Roberts, as he begins a tour of his pedal-powered device that some might call a bicycle.

Everywhere Roberts rides, people gawk. It’s no wonder. After months of research and development in a private lab that Sun Microsystems Inc. donated to the tall, bearded and friendly free-spirit, he is completing the final touches on his project.

In July he’ll begin a tour throughout the countryside of the United States that will take him wherever whim or interest inspires. Once upon a time, Roberts seemed a fairly conventional fellow, with a house in the suburbs of Columbus, Ohio, where he made a reasonable living for four years as a technical writer.

But he became bored and unhappy. “I tried the American dream,” he says. “It was awful.” No pawn of fate, Roberts moved on. “I decided to find a way to combine all my passions with money as an afterthought.”

The passions included travel and adventure, publishing, bikes and computers (“They go together in some perverse way”) and romance. After brainstorming, he realized, “All I had to do was trash my home and travel on a bicycle with a computer.”

But first he had to build the bike. He designed and built one named Winnebiko, and it included some clever innovations, including a keyboard built into the handlebars that he says was inspired by the method of forming notes on a flute. He added a computer and a modem, and soon he was happily riding all over, filing articles and writing a travel book about his adventures entitled Computing Across America: The Bicycle Odyssey of a High Tech Nomad.

Today Roberts, 38, thinks that first bicycle was merely a working prototype. “It was anemic,” he says. His new device is far more elegant and sophisticated, though still admittedly “weird looking, but incredibly comfortable.” It weighs about 350 pounds, and he calls it BEHEMOTH, for Big Electronic Human Energized Machine … Only Too Heavy.

It may get heavier, Roberts says, because every day he works, he can’t resist adding more features. Peddling is made possible with a gear system that has 105 speeds so that “I never have to get off and push.”

Nearly all the features on BEHEMOTH rely on some of the computers that are built into the bicycle. These include:

BEHEMOTH is powered by solar energy generated by 72-watt panels stretched across the back trailer that are connected to three batteries.

A mouse control device is built into the helmet so Roberts can move the cursor on the flat panel screen by simply turning his head slightly, an example of the attention to detail that characterizes the bicycle. It is after all his “traveling office.”

In fact, it is. Roberts’ main source of income these days is his newsletter, The Journal of High-Tech Nomadness, which he writes while touring. He sends articles and photos electronically to a partner who puts it together, prints and mails to subscribers.

Roberts doesn’t like to say how much the BEHEMOTH is worth, but consider the security system he has built. When someone comes within 15 feet of the bike, Roberts is alerted. If someone should manage to ride off, the system will automatically phone the police and with a digital voice provide its location gathered from a built-in Trimble global positioning satellite antenna.

Roberts can monitor the bike when he is away from it and listen to any activity. He can even type messages and send them to the bike, which will then broadcast them aloud. “The idea is psychological deterrence. They realize they’re dealing with an intelligent machine, and they have new respect.” While working on BEHEMOTH, Roberts is also offering Sun some technical consulting.

“We’re providing him some space to hang out because we think he’s a cool guy,” says Dave Ditzel, a Sun director and researcher. “In this field you talk to lots of experts, and you can’t be afraid to talk to wild and crazy guys.”

Every Friday afternoon, Roberts opens the doors of Nomadic Labs to Sun employees. Some always wander by and listen to him describe his bike and engage him in conversation.

Today, computer companies focus increasingly on portable devices that can be used outside the office. Roberts thinks this may explain how he caught Sun’s attention. “Technology has rendered my physical location irrelevant,” he says. “My community is global.”