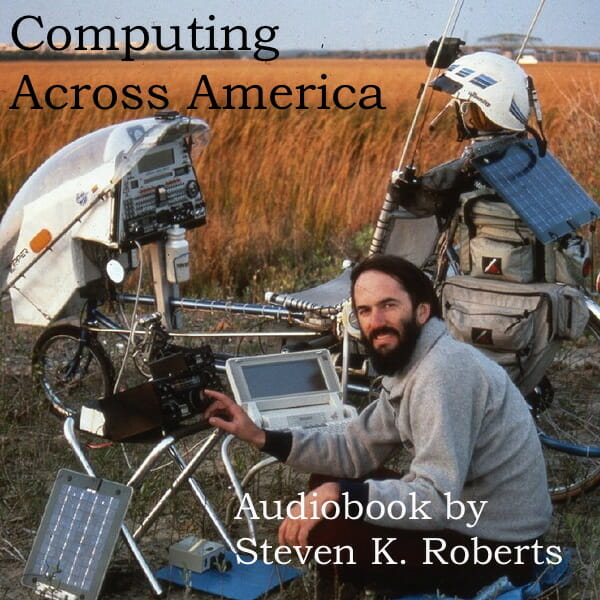 Computing Across America is the story of my technomadic adventures around the US, beginning in 1983 with the Winnebiko, continuing through the next 7 years with the Winnebiko II and BEHEMOTH… a total of 17,000 miles on the road as well as some epic geek layovers to upgrade the technology. An eBook edition is now in progress.

I was trapped in Ohio suburbia at the time, in debt and hugely frustrated, and the crazy notion of taking my freelance writing business on the road with a computerized bicycle was radical indeed. Back then there was no Internet, the most robust portable computer had 32K of memory, and people were still wondering whether it was possible to work at home… much less while traveling. It was a very different world. When I met a fellow on an exotic recumbent bicycle during an afternoon ride in the Ohio farmlands near my house, my life took an abrupt and irreversible change. Within six months, I was a high-tech nomad, traveling full time while using computers and the new online networking tools to write for a living.

I have been meaning for many years to podcast this book, setting the story free while preparing to publish a hugely expanded version that includes tech material. There are tech notes below if you are curious about the process.  This audio file lasts 14½ minutes… I hope you enjoy it! If you’d prefer to read instead, the text version is here. Otherwise, just click the arrow to begin:

I used the little Zoom H2 recorder as an audio interface, reading the chapter directly into Audacity without first recording it on an SD card. For a quiet setting, I used my boat as a recording studio (softening the environment by draping a few blankets in the pilot house), then cleaned up a few annoying biological noises.  I imported additional audio clips into new tracks: the chapter identification (read by the MacBook Air in the “Alex” voice), a few random sounds found online, and four from the excellent Freesound collection. These are:

After mix-down and exporting the edited piece into a mono MP3 file, I used iTunes to tweak the ID3 tags (including a link to this site and the “album cover art,” so it will be pretty when the file escapes this page and finds its way into podcatchers and music libraries).

I look forward to producing the rest of the chapters, and as they appear on this site you can find them with the “Audiobook” category over there on the right. Each chapter will also point to the next (as well as back to the beginning), but at the moment this is the only one.

As with all the other material in this archive, the “posting date” is set as closely as possible to the actual date of the events (or publication), yielding an accurate timeline. There are forward and backward links at the top and bottom of this page. As the audiobook unfolds, it will begin to interleave with media coverage and my own articles… and between now and then, I’m gradually moving the text of the entire book onto this server (here is the beginning).

Cheers from three decades down the road…

Posted in Audiobook and tagged Audio, Audiobook, Computing Across America
← The Idea is BornWords’worth 1983 press release →