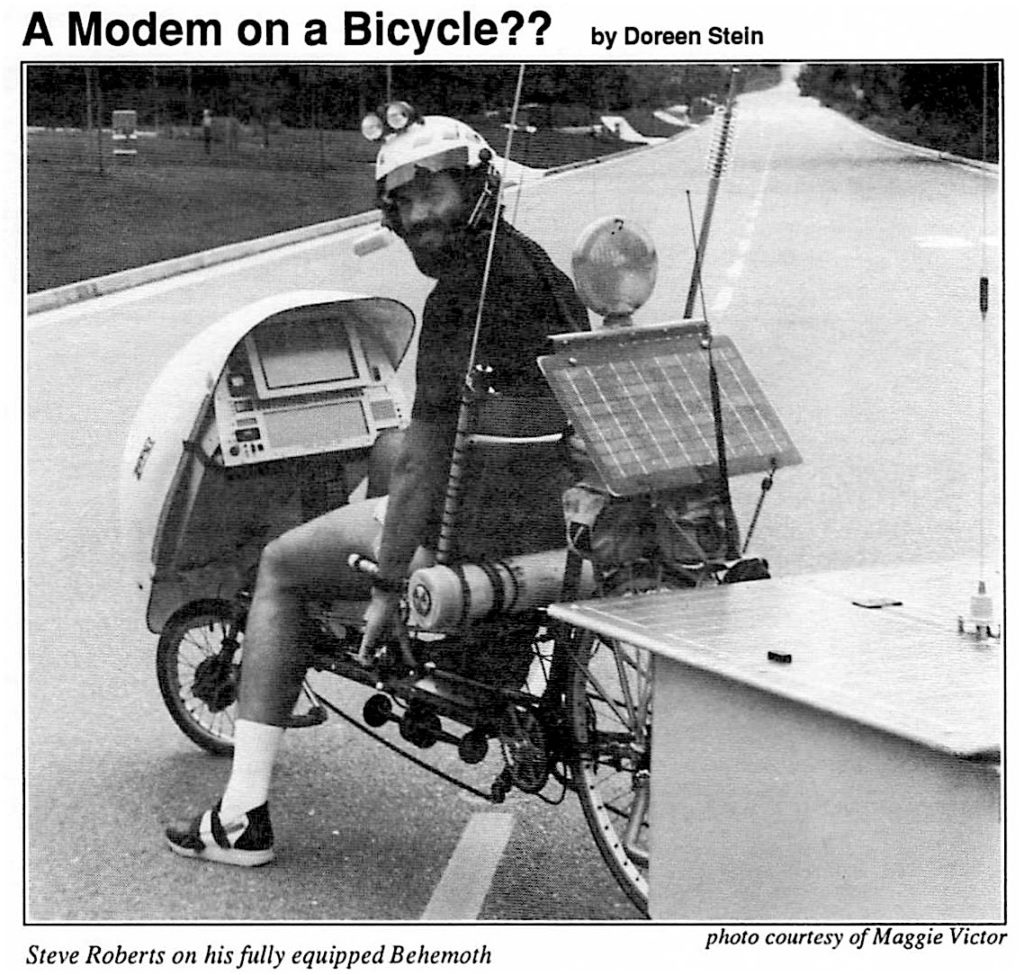 Telebit was a fun sponsor of BEHEMOTH… not just providing a couple of modems (a tiny QBlazer as well as the exotic CellBlazer that I integrated with the Oki 491), but also hosting my FTP server and allowing one of their employees, Zonker Harris, to spend significant time in the bikelab. This article was in their company newsletter, and coincided with bringing the bike’s SPARCstation online.

Birth of BEHEMOTH, “Big Electronic Human-Energized Machine… Only Too Heavy”, an 18 foot, 350 pound recumbent bicycle, redefined the concept of freedom for Steve Roberts. Behemoth is a mutation of Winnebiko and Winnebiko II which were created when technology promised him time-freedom but instead strapped him into slavery merely to maintain the luxuries that technology has enabled. Open hearted and broad minded, he savors contact with all of humanity as well as, and beyond, the white picket fence neighbors and people of partial-walled office cubes.

“Behemoth is an efficient, comfortable and safe human powered vehicle integrating state-of-the-art mechanical, safety, medical, life support and camping equipment. And there is always maximum communication between man and all systems whether the bicycle is in motion or motion less.”

Steve sports a gleam in his eye cherishing “in the moment” encounters with humanity, relishing challenging moments of technology that enhance community and the opportunity to test the freedom that technology promises. His belief in his dream, his unassuming easy manner and his technical savvy attract media attention, giving all of his sponsors uncharted publicity.

CellBlazer is integrated into this creation to provide “10 Kilobaud data rates and a protocol that allows the bike to appear on the net continuously… but only burning air time when there is data to be moved. It will also make the bike a roving TCP/IP node, tied directly into Internet/Usenet via a Telebit Cellblazer modem and the Qualcomm OmniTRACS satellite earth station.” Before CellBlazer, he transmitted information over pay phones, now he has the capability to do it directly from the bike.

After showing us the latest and greatest technology integration Steve asked “Are there any techies at Telebit that would be willing to help me wire up the CellBlazer?” Behemoth drop dead date for getting back on the road is mid-July. Steve can be reached by E-Mail [obsolete address redacted].