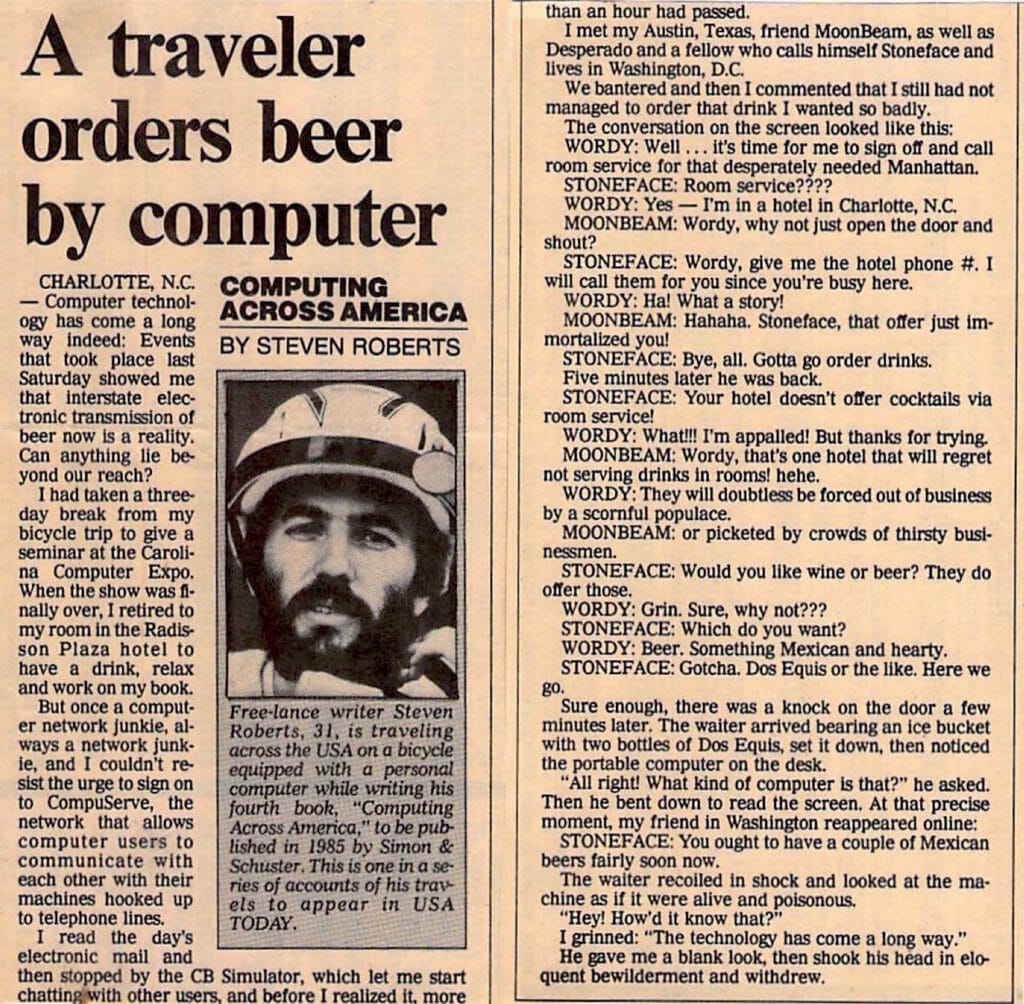 I remember this event with deep fondness… I often used to joke during my high-tech bicycling years that I was “an agent of Future Shock,” and this is one moment that epitomized that. The world was changing fast, and the tiny microculture of online denizens danced playfully in a whole different reality than the one experienced by those still limited by physical location. It happened that I had a column in USA Today during part of the trip, and this made a perfect little vignette for that week’s update. The CompuServe CB transcript was copied from my Model 100 record of the chat session… tying up the phone, unable to call room service.

CHARLOTTE, N.C. — Computer technology has come a long way indeed: Events that took place last Saturday showed me that interstate electronic transmission of beer now is a reality. Can anything lie beyond our reach?

I had taken a three-day break from my bicycle trip to give a seminar at the Carolina Computer Expo. When the show was finally over, I retired to my room in the Radisson Plaza hotel to have a drink, relax, and work on my book.

But once a computer network junkie, always a network junkie, and I couldn’t resist the urge to sign on to CompuServe, the network that allows computer users to communicate with each other with their machines hooked up to telephone lines.

I read the day’s electronic mall and then stopped by the CB Simulator, which let me start chatting with other users, and before I realized it, more than an hour had passed.

I met my Austin, Texas, friend MoonBeam, as well as Desperado and a fellow who calls himself Stoneface and lives in Washington, D.C.

We bantered and then I commented that I still had not managed to order that drink I wanted so badly. The conversation on the screen looked like this:

WORDY: Well… it’s time for me to sign off and call room service for that desperately needed Manhattan.

MOONBEAM: Wordy, why not just open the door and shout?

STONEFACE: Wordy, give me the hotel phone #. I will call them for you since you’re busy here.

WORDY: Ha! What a story!

Five minutes later he was back.

WORDY: What!!! I’m appalled! But thanks for trying.

MOONBEAM: Wordy, that’s one hotel that will regret not serving drinks in rooms! hehe.

WORDY: They will doubtless be forced out of business by a scornful populace.

MOONBEAM: or picketed by crowds of thirsty businessmen.

STONEFACE: Would you like wine or beer? They do offer those.

STONEFACE: Which do you want?

WORDY: Beer. Something Mexican and hearty.

STONEFACE: Gotcha. Dos Equis or the like. Here we go.

Sure enough, there was a knock on the door a few minutes later. The waiter arrived bearing an ice bucket with two bottles of Dos Equis, set it down, then noticed the portable computer on the desk.

“All right! What kind of computer is that?” he asked. Then he bent down to read the screen. At that precise moment, my friend in Washington reappeared online:

STONEFACE: You ought to have a couple of Mexican beers fairly soon now.

The waiter recoiled in shock and looked at the machine as if it were alive and poisonous.

I grinned: “The technology has come a long way.”

He gave me a blank look, then shook his head in eloquent bewilderment and withdrew.

Free-lance writer Steven Roberts, 31, is traveling across the USA on a bicycle equipped with a personal computer while writing his fourth book, “Computing Across America,” to be published in 1985 by Simon & Schuster. This is one in a series of accounts of his travels to appear in USA TODAY.

Posted in Articles by SKR and tagged CompuServe, USA Today
← The Complete Guide to Microsystem Management – ReviewThe Day of the Mines →