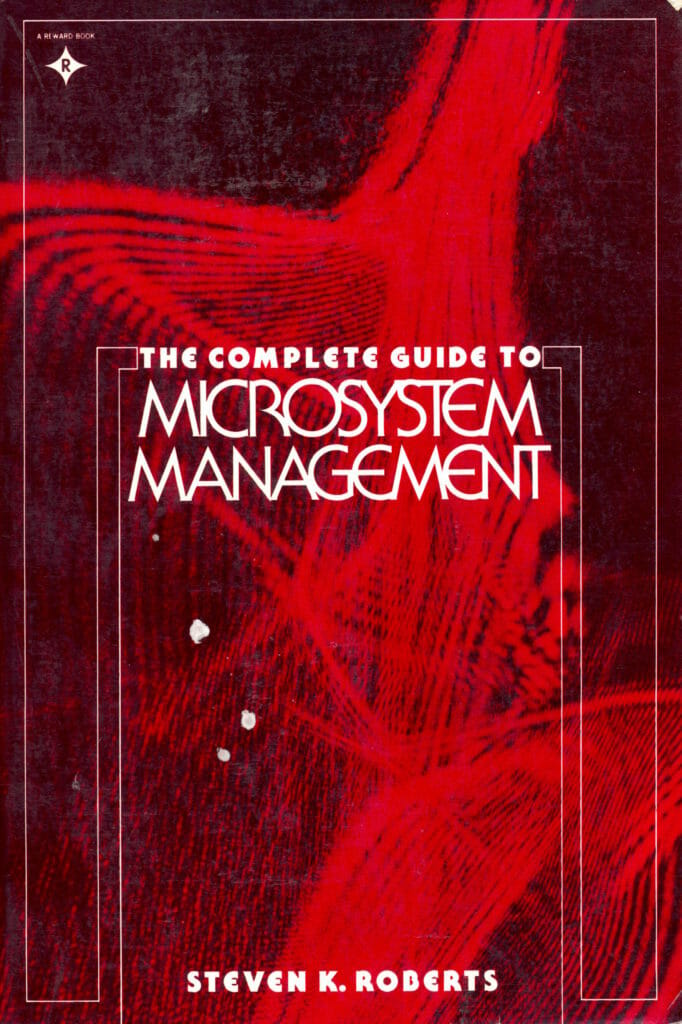 I published this book just before hitting the RESET button on the back of my head and taking off around the US on an open-ended technomadic bicycle adventure. It spun out of an article I wrote for Kilobaud called “Managing the Small System Environment,” discussing such things as related filing systems, backups, and other suggestions for taking on the responsibility for a business computer, and someone at Prentice-Hall thought it should be expanded into a book. I agreed, and had fun writing it. This is one of the few reviews that hit the trade press, published in Online Today near the end of my first 10,000 miles.

It’s worth a quick comment about the cover art shown above: I created the laser diffraction pattern by shooting with a lenseless SLR while shining a Spectra-Physics 155 Helium-Neon laser through a cheap piece of pressed glassware directly onto the film plane… a variation on my favorite light show for guests. The publisher then integrated the selected slide into their own cover graphics.

The Complete Guide to Microsystem Management

Steven Roberts should have been taking a big chance when he chose to call his new book a “complete” guide. Most authors who do so risk a reader’s disdain should their efforts be something less than what the reader considers to be “complete.”

But if the truth be known, Roberts’ new book, The Complete Guide to Microsystem Management, runs little risk of disappointing readers. It does perhaps the best job I’ve seen so far at dealing responsibly, and comprehensively, with the problems associated with entering the computer age.

Roberts touches most of the same bases that other guidebooks offer: the basic nuts-and-bolts of computer systems, the terminology and the standard list of do’s and don’t’s. Rut that’s where the similarity ends. Who else throws in at the end of the book the schematic for a simple home-built surge suppressor?

But what’s so appealing is that Roberts obviously thinks his readers are smart — not hackers, mind you — but certainly intelligent people able to deal logically with decisions about choosing, buying and running a new computer system.

Early on, he spends a lot of time on the system environment, as he calls it, going deep enough into subjects like heat, humidity, interference, shock, contamination, grounding and computer room layout to let the reader understand why such subjects are important, but still he does not intimidate readers with useless jargon.

He’s included a chapter each on catastrophes and how to avoid them, and on the human side of adding computers to a business. In the first, he not only deals with the proverbial, “What happens when the power goes out?” questions but also deals up a realistic look at the potential problems of theft and vandalism. In the chapter on the human environment, he spends as much time discussing how to make managers psychologically comfortable with these new tools as most authors spend on suggesting how to shop for ergonomic chairs.

He’s also included what may well be one of the best explanations offered in a long time as to how computers do what they do. And his section on security mechanisms for computer systems ranks equally high.

It may be that Roberts’ book sat so well in part because we stumbled across it at the same time our office closed a deal on a new computer system. But more likely, it was because Roberts offers no-nonsense advice and information in an intelligent fashion. Noticeably absent is the proverbial tone of the computer expert “talking down” to the computer-illiterate common man.

Roberts warns his readers at the beginning that “this book is about glue — the glue that holds it all together.” His analogy is solid. Compared to his efforts, most other guides are simply a compendium of individual pieces — sans glue.