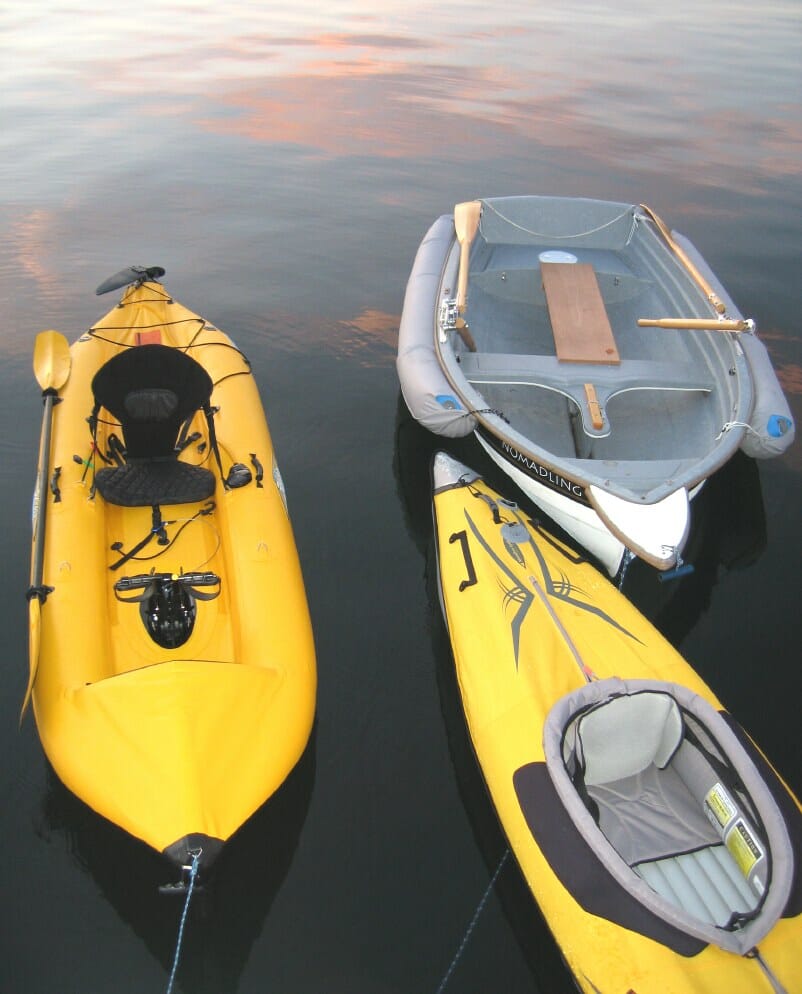 The boat is now awash in tools, gray NMEA 2000 cables, little clusters of parts, removed panels, and the general unnameable clutter of any large project. A few days ago, I ran the backbone of the network using all Maretron hardware… centered both electrically and conceptually at the inside helm station:

The yellow connector is the power tap, which introduces 12 volts to the network via a dedicated circuit breaker. On either side of that are 4-port tees for the local devices, and from each end go the lines to other regions of the boat… out the top sternward to the autopilot and aft helm gear; out the bottom to the wind/depth instruments and the comm bay.

It is well-known that cabling on a boat is hard work, but we thought we had seen the worst of it after using a conveniently embedded string to pull the 7-meter run between the hydraulics cabinet at the stern and the power bays in the pilothouse. I plugged in the Maretron GPS and rate gyro compass, hacked a proper N2K connector onto the proprietary Simnet cable associated with the Bluetooth autopilot remote, and was able to see live data while strolling wirelessly about. Safari, so goody.

I paused to research the ideal mounting location of the compass; being a steel boat, Nomadness will inevitably distort the earth’s magnetic field, and folks have traditionally gone to great lengths to put their heading sensors as far from ferrous influences as possible… like partway up the mast. This is a questionable idea due to the huge increase in roll/pitch/yaw acceleration noise as the boat dances through the waves, and it’s also hard. I had thus more or less resigned myself to a custom enclosure on the radar arch, when Maretron responded to my question in detail and reassured me that, based on their experience with a hundred or so steel boats, the problem is not that serious with rate gyro technology (unlike old flux gates, which also really like to be level). This happy news opened up the nav instrument pod over the companionway as an option, also a perfect place for the GPS and the wireless base for the autopilot remote. And it’s easier too, surely.

Soooo… figuring it would be a quick run of about 4 meters worth of cable followed by much fun involving the shiny new DSM250, we started probing for openings early Wednesday afternoon. But my cable tracer revealed signals wandering off in an unexpected direction, so bits of the boat started getting removed… and by nightfall we had the headliner off and were beginning to disassemble the shower compartment. Sure enough, with plenty of tight bends, there was a convoluted path… and it was packed with wire.

While trying to figure out how to poke a soft cable through it without the assistance of a highly trained cockroach trailing a string, we discovered something unsettling: a seriously melted wire pair bound into a major harness, heading out of the DC power panel area. Not good… this happened on BEHEMOTH one smoky night in the bikelab due to a big grounding oops, and resulted in redoing most of the cable harness. I gingerly began separating the largely bare and corroded wire from its neighbors, sometimes pulling away fused insulation, and finally isolated it to the starboard windshield wiper.

Issues with wipers aside, this opened up a wonderful opportunity… use the trashed cable to pull the new N2K one! It was still a battle, but by about 2 AM we had it dangling happily next to the network tees and started screwing the boat back together.

And then… darkness. I had just driven a wood screw through the cable to the overhead galley LED light, and popped the circuit breaker. ARGGGHHH. I’ll deal with it in the morning.

In other news, we finally got out on the water in our kayaks… it has been such a relentlessly cold year (even now, in Junuary), that paddling hasn’t been all that alluring. As I mentioned in an earlier post, mine is the pedal-powered i12S inflatable from Hobie, and Sky’s is the new Expedition from Advanced Elements. It tracks beautifully, and seems to suit her well:

Unlike mine, it packs into a sane and manageable package, especially with a Hobie 4-piece paddle. (I have no idea where Nessie is going to stow aboard… probably loosely inflated and lashed to the lifelines).

The sudden surge of activity is no accident; we’re leaving the marina very soon and going on the hook prior to actually amortizing this ship rather than treating it as an endless collection of projects and gear-buying opportunities. The next 3 weeks should see the installation of a new holding tank and corresponding plumbing, integration of the autopilot, and at least a temporary loaner chartplotter since Furuno was over-optimistic about taking orders for their sexy new Navnet 3D and the back-orders are becoming stuff of legend.

This blog will continue to be the primary venue for updates, though one of these days I really need to replace the Nomadness root directory with Joomla. I’m developing quite a backlog of technical material that would overload the blog format and be impossible to navigate. Quick ephemeral notes, like current eBay activity, continue to post more-or-less weekly on my live page [note: this manually-updated page is long gone].