It has begun at last.

The bike sits quietly blinking beside the half-finished wing of a homebuilt aircraft. Batman the Manx sits half-snoozing in the doorway, I’m swilling Millstone coffee from my stainless steel traveling mug, and Maggie’s out there in our hosts’ kitchen, conjuring a sorbet to go with dinner. Those are the headlines. We are on the road.

It began as it always does: poignant farewells, final tweakings, long discussions over maps. The ferry to Seattle seemed different this time; we hugged on the stern as Bainbridge Island faded into the fog — Bainbridge, our home for the last month, our home perhaps someday again. A quiet kiss, breath clouds white in the gray mist, bikes the focus of commuter curiosity. Yes, I can feel it… we’re finally on the road. 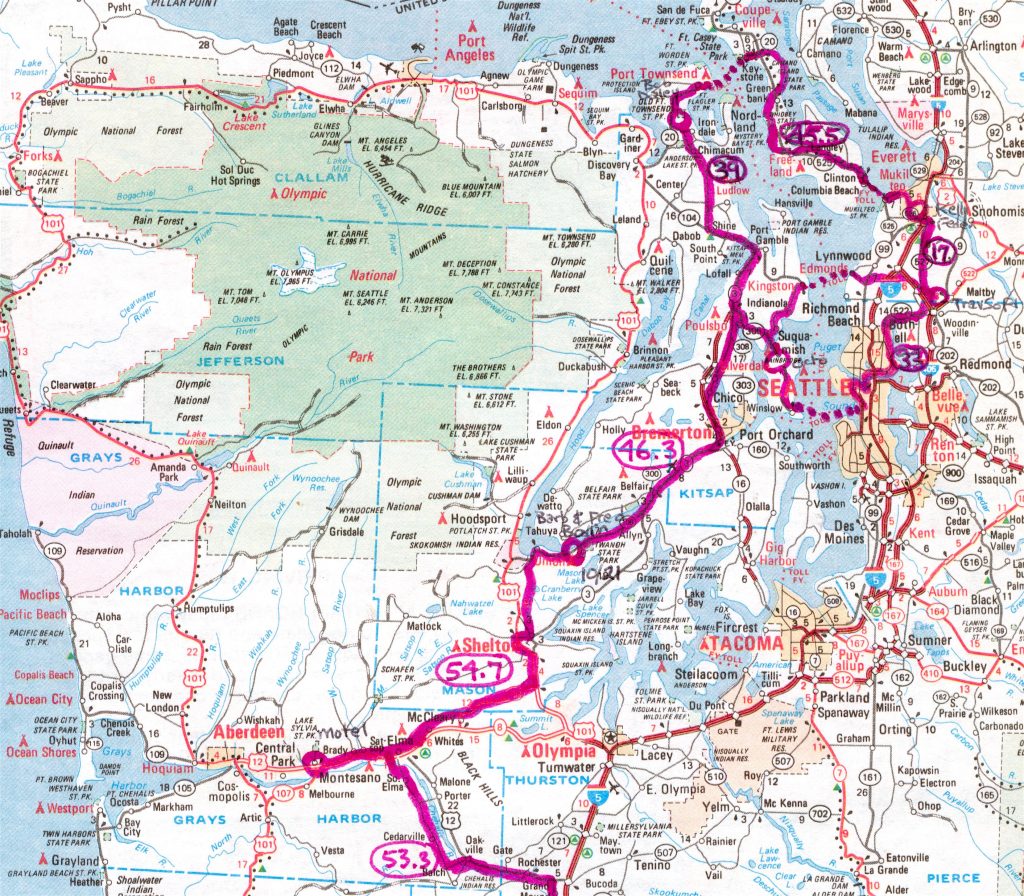 First stop: Bothell. Seattle passed smoothly, the Burke Gilman Trail simplifying what would otherwise have been a 33-mile ordeal of city riding. Whispering past joggers, catching glimpses of urgent racers, swerving to miss the occasional stray toddler, we made our way through the colors of early fall to Traveling Software. This was to be our official send-off, an event that would draw not only five TV crews but GEnie’s own Steve Haracznak — director of Public Relations. When you become a living caricature of technology’s potential, apparently, the industry takes notice.

Dinner. Exuberant tale-swapping. Big plans. Debugging till 2. Fitful sleep on the floor; awakening bleary to the humming of corporate America. “There’s somebody sleeping in there,” came whispers from the hall; then we emerged, blinking in the fluorescents, stumbling to the coffeepot and greeting the first reporter and hour and a half early. “I am the Winnebiko,” said the bike, “do you have any questions before we head south?”

Four hours of media. CNN’s Roger Gadley arrived and joined the local crews standing about with cameras perched like electronic parrots on their shoulders. Visitors included a GEnie network subscriber who has been following these columns and had to see if this bike was for real. Traveling Software’s Mark Eppley stood with Steve and looked on with a sort of subdued glee — for the message that would go out over the airwaves was that of radical new freedoms that could be gained through portable computers and telecommunications. I rode through the Computing Across America banner (photo above) to scattered cheers, did the show and tell countless times, and then was off — this time for real — northbound with Maggie astern and the unknown ahead. 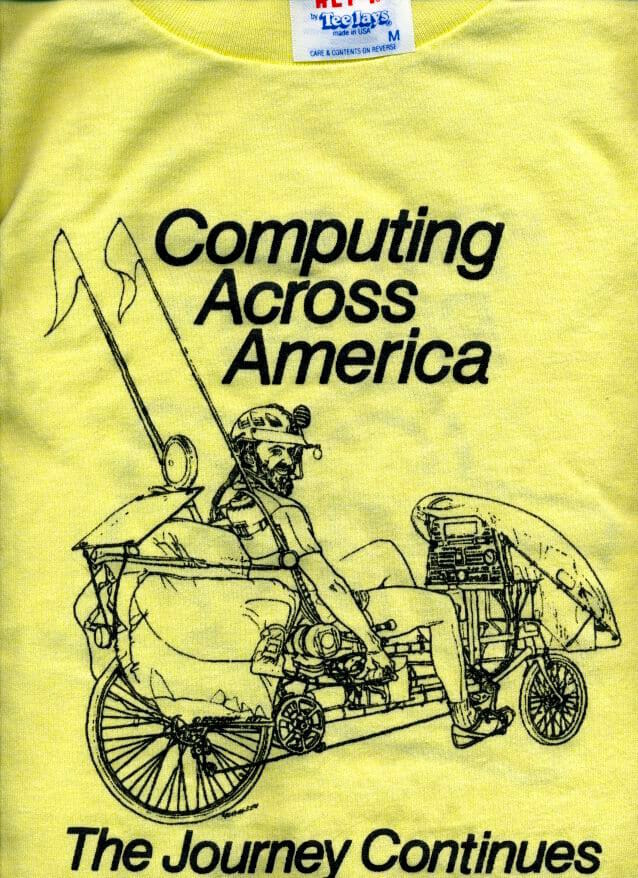 Northbound. In October. In Washington. Logical, eh? Actually, this is a sort of shakedown, a minor loop around the Puget Sound area that will give us one last brief chance to fix things in the Bainbridge Island shop before scurrying south with winter’s blast at our backs. But we’re moving, and that’s what matters; cold wet weather can only deepen our appreciation of what lies ahead.

We slept in Everett that night, wrestling the bikes past leg-climbing squirrels and up right-angle steps into the apartment of a friend from Traveling Software. Already the differences: the human kaleidoscope twisting with our wheels and revealing lifestyles unimaginable with every layover. I remember now, and Maggie’s seeing it too: the journey’s stability lies in variety, and change is the very essence of what at first seems chaotic. Activate all receptors; set information bandwidth to maximum. LIFE has resumed.

Cold fog, long hill, down past the gravel pit, flashers ablaze, hands burning numb, teeth clenched in that violent grinning grimace of exuberant pain. Living! Mukilteo ferry purring into the soup, the twice-crashed Cathlamet bearing its cargo of us and coffee holding gloved hands on the voyage to Whidbey Island. The day crisp and beautiful, parking panting bodies in spicy autumn leaves to crunch Washington apples, Maggie learning to scream her way up the rougher grades to mask the pain. Voices tiny in each other’s ears through 2-meter radio, the Osprey nest, the encounters — everywhere the encounters. Normal foods made robust through hunger, the finest seasoning of all. Hazy scenery passing like wide-bandwidth video, the pumping of polypro-clad legs driving the sweet whisper of chain and tire. And through it all the inaudible hum of processors, snagging thoughts like passing butterflies in their delicate electronic web as my fingers tickle the handlebars. Ah. It’s really happening.

It was on yet another ferry that we met Bob Daley: enroute to Port Townsend, preparing to seek the hostel at Fort Worden. “I just dropped my son off at the airport in Vancouver,” he said, “he’s off to go trekking in Nepal.” A moment’s hesitation, then a friendly grin. “His room’s empty, if you’d like a place to spend the night… say, that console looks like it belongs in an airplane…” 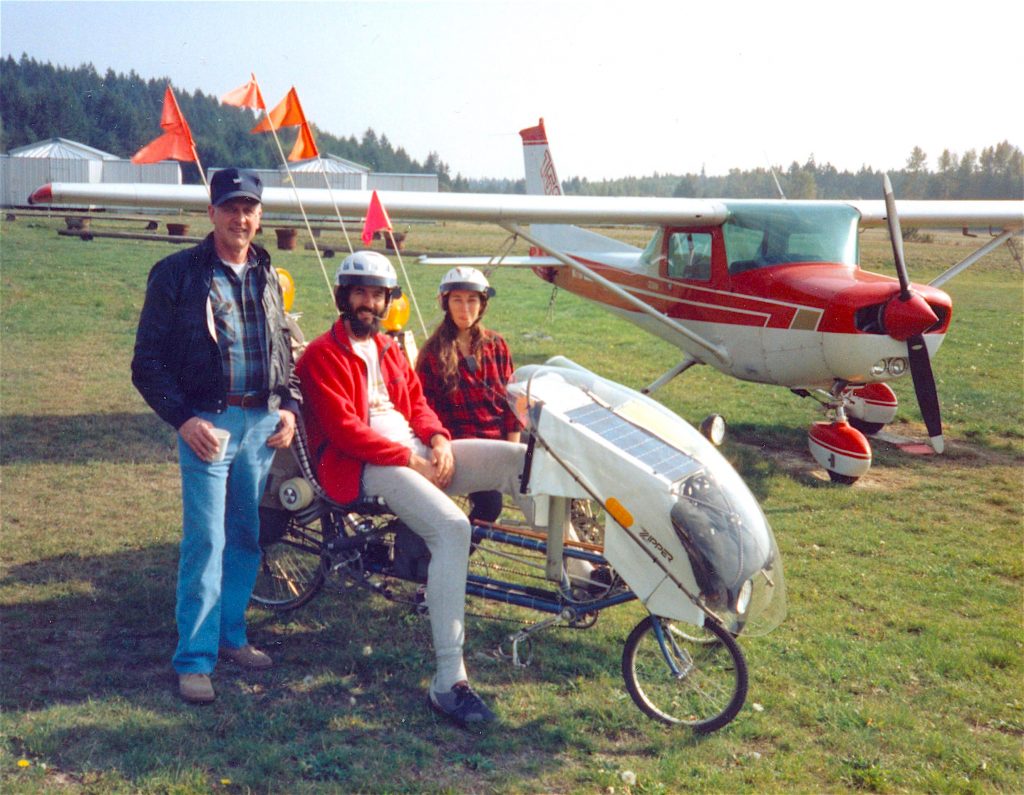 Over a day later we’re still here, comfortable with our new friends as we engage in the basic barter of this lifestyle: snippets of our lives for a taste of theirs. We all emerge richer, each feeling that he or she has gained the most. This is human commerce at its finest.

By morning, we’ll be southbound (after a flight over the Olympic Mountains in Bob’s Grumman). No further north this year, no more senseless flirtation with the grim misery of those coastal rains everybody warns us about. Somewhere out there is a warm winter sun, only a couple hundred thousand pedal cranks away…

The familiar is fading. The nomadic life — seeming as much my essence as the sweat that sustains it — has begun. I smell it.